The PowerShot S100 is Canon's latest high-end compact camera. It has a larger than usual 1/1.7-inch sensor for a compact camera, similar in size to the 2010 PowerShot G12. It also comes with full manual controls, a control ring around the lens and a control wheel on the back to quickly change essential settings. It opens with a wide 24mm and fast f/2 aperture at its widest. It's a compact aimed for the enthusiast, but with its small size it can be attractive to casual users as well.

While the S95 before it was a general update to the S90, the S100 brings significant changes to the table. The sensor resolution has been upped from a 10MP CCD sensor to a 12MP CMOS sensor, video resolution has increased from 720p to 1080p, and optical zoom has been lengthened from 3.8x to 5x. A GPS module is built-in and handling has been improved with a front grip.

The S100 looks like it could very well be the compact camera of the year - and we think it comes pretty close. More details on its evolution and performance in the following few pages. 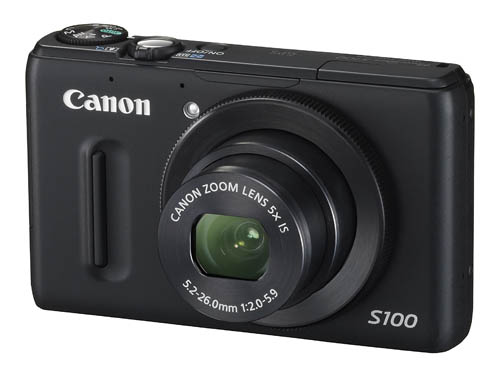