ASUS TUF Dash F15 Review: An all well-rounded notebook for both gaming and work

The TUF gets a makeover 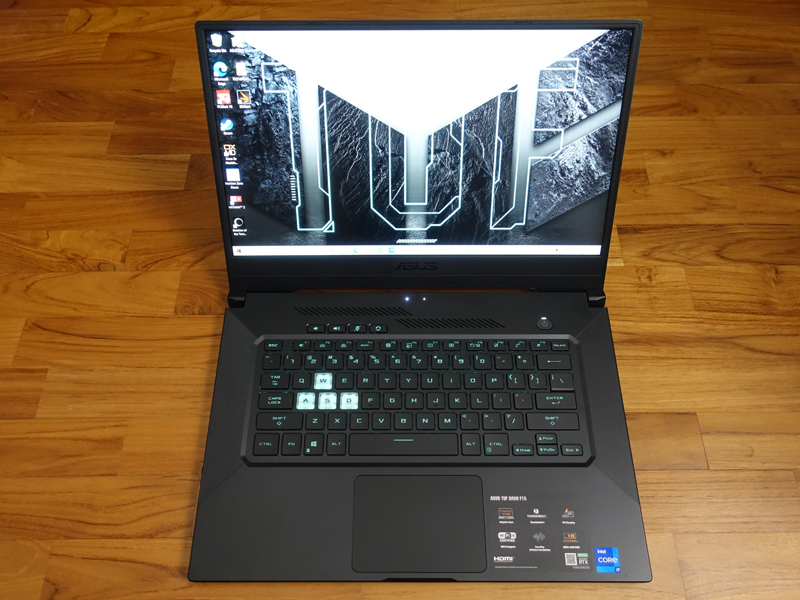 Intel’s struggles in the refinement of its chip-manufacturing process have been well documented Repeated manufacturing problems in recent years have delayed its ability to shrink its chips through several different sizes of process node, eroding its technological lead. This has allowed rivals, chiefly AMD, to leapfrog Intel in both the consumer desktop and mobile processor space.

Taking gaming notebooks for instance. Many notebook makers have chosen AMD parts over Intel when launching their flagship models because the Ryzen 5000 mobile series are processors that genuinely offers great performance and battery life – such as the ROG Strix Scar 15 that I reviewed a little while back, and even the Lenovo Legion 7 (my review of it will also be up shortly). Essentially speaking, Intel has a lot to catch up with AMD, but their new 11th Gen Tiger Lake H-series do have a handful of high-powered quad-core processors for thin and light gaming notebooks that could give the top-line Ryzen 5000 mobile CPUs a run for their performance.

That brings us to the ASUS TUF Dash F15, which is one of the first gaming notebook to come with the Intel 11th Gen Core i7-11370H, a Tiger Lake-based H-series processor. This means it's not a low-powered processor that's normally found in thin and light notebooks and it's made for content creators and gamers. This 35W TDP quad-core mobile processor packs a punch with a high base clock frequency of 3.3GHz and it can max with a 4.8GHz turbo frequency. It’s also the first gaming notebook to come with NVIDIA’s newest RTX 30-Series mobile GPU, the choice of either a GeForce RTX 3070 or the newer but entry-level GeForce RTX 3050 Ti (with a 60W rated TGP). Having these high-end parts is interesting, because it uplifts the TUF brand into a whole new category. For once in recent years, ASUS has a non-ROG branded 15-inch gaming notebook in its line-up that can aim to be powerful, slim and lightweight. 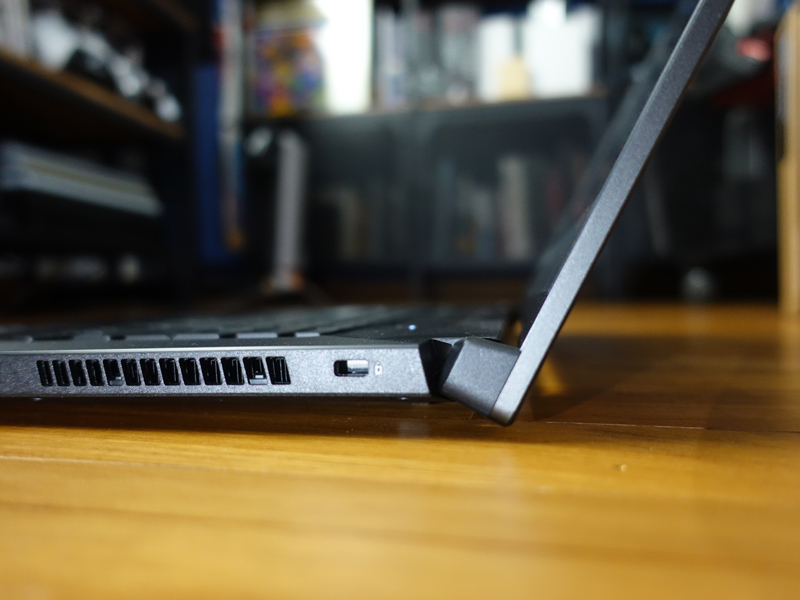 For me personally, I’ve always found that the older TUF notebooks tend to look garish in comparison to the sleeker models from ROG. One could say that “you pay for what you get”, but apart from components and materials where the costs are tangible, there’s simply no excuse to terrible designs. Even entry-level products can look good and classy. With the TUF Dash F15 (let’s just call it the TUF F15 henceforth) however, ASUS have opted for a complete revamp that gives its new chassis design a more refined look than last year’s TUF A15 gaming notebook. The TUF F15 has a slimmer and more confident look than its predecessors ever had. In fact, it reminds me a lot of the older ROG Zephyrus series of notebooks. The lid is gunmetal grey with a nice and polished feel to it, while the inside is black and made from an all-plastic mould. 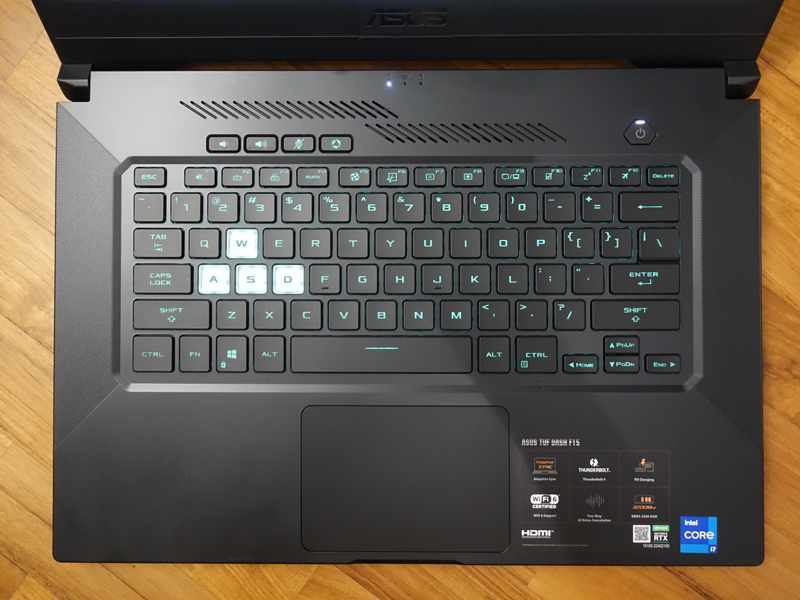 If there’s any doubt that the TUF F15 is a gaming notebook, then the keyboard is a dead giveaway. While the previous TUF A15 sported an odd backlit orange-red colourway for it “WASD” keys, the ones on the TUF F15 sport a more neutral greenish-white colour choice that I thought are more subtle. The effect is more subtle than it seems and can be turned off or the brightness adjusted. It’s actually kind of cool to see the light shine through the transparent WASD keys and serve as a practical guide for you to find those all-important keys if you are the sort that likes to play games in darkly lit areas. The keys themselves feel good in terms of feedback, and I was able to quickly get used to typing on the TUF F15 since the keys are well spaced out. 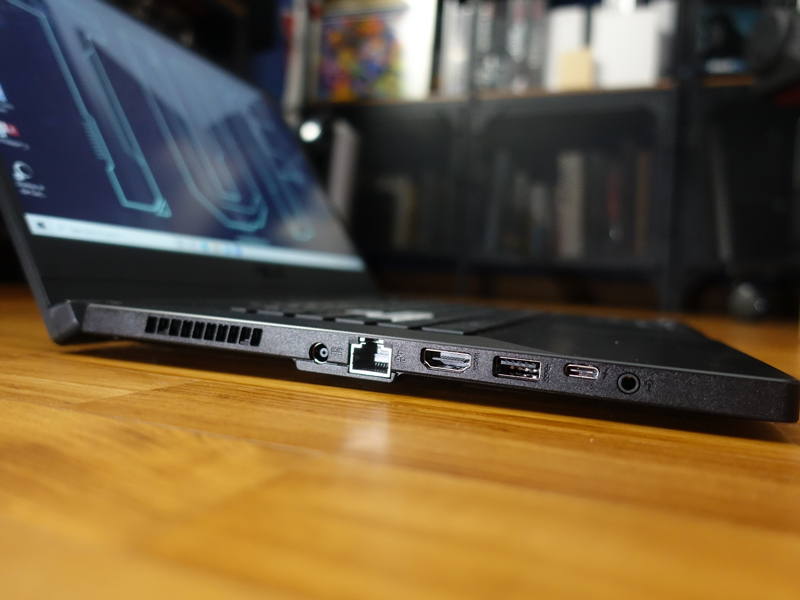 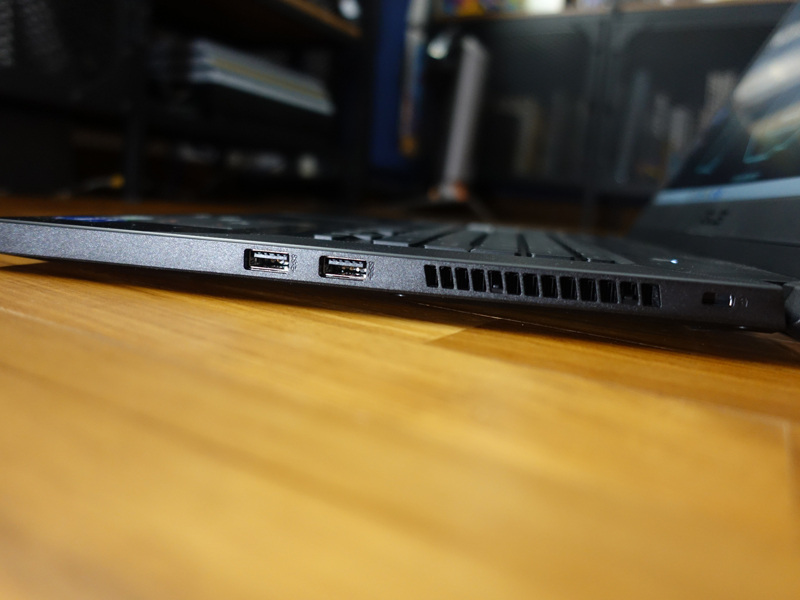 For cooling, the TUF F15 comes with exhaust vents on the back and sides. With the vents taking a fair bit of space on the left and right sides, the I/O ports have been moved further down. These are standard ports including an Ethernet, USB Type-A, USB-C, HDMI ports and a mic combo jack, which should cover your connectivity adequately.

What about the Display?

The TUF F15 review unit that I got from ASUS Singapore comes with a FHD (aka 1080p) IPS-panel with a 144Hz refresh rate, along with Adaptive Sync. While not quite speedy as displays that comes with a faster 240Hz or 300Hz refresh rates, 144Hz is fluid enough for even most professional esports players. What’s really worth noting is that the display offers good colour and contrast performance with 100% coverage of sRGB, which is somewhat of a rare feature for notebooks of this class. 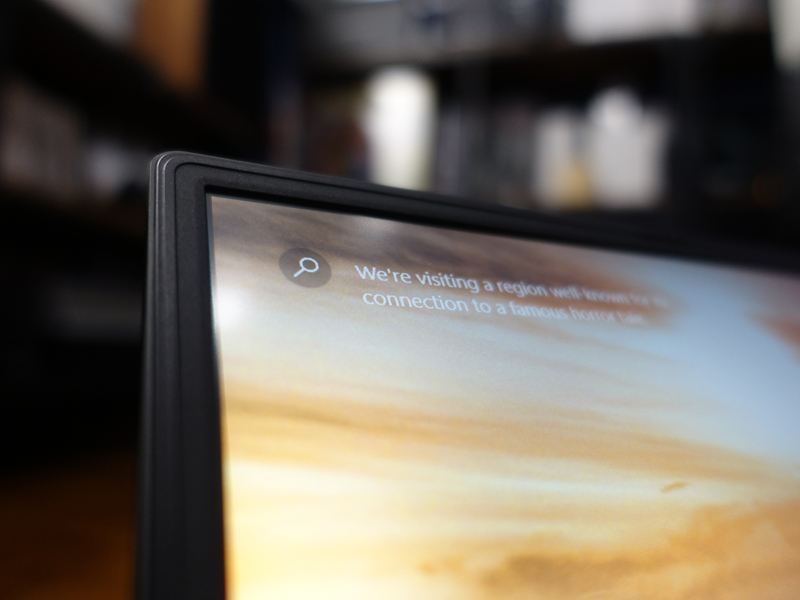 ASUS has also trimmed the side and top bezels of the screen, but that has come at the expense of a built-in webcam. In the current “new” normal where most of us have adapted to a work-from-home arrangement, I thought this was a curious miss by ASUS. At least with the ROG range of notebooks for 2021, most of which also comes without a built-in webcam, an external (and a pretty good one) webcam is bundled instead. Not so for the TUF F15 though. You’re pretty much left to your own to purchase one separately. Let's not forget if you join video chats often from the comfort of your notebook, the missing webcam is a troublesome sore point that requires an external fix.

Write a Review
Excellent battery life
Good productivity performance
Polished build
Display quality is quite possibly the best in class
No built-in webcam
Does not come bundled with one too
No option for higher-end RTX 30-Series GPU for Singapore market
Our articles may contain affiliate links. If you buy through these links, we may earn a small commission.
Sponsored Links