The first and only notebook powered by the Ryzen 9 4900HS

Note: This article was first published on 13th April 2020. 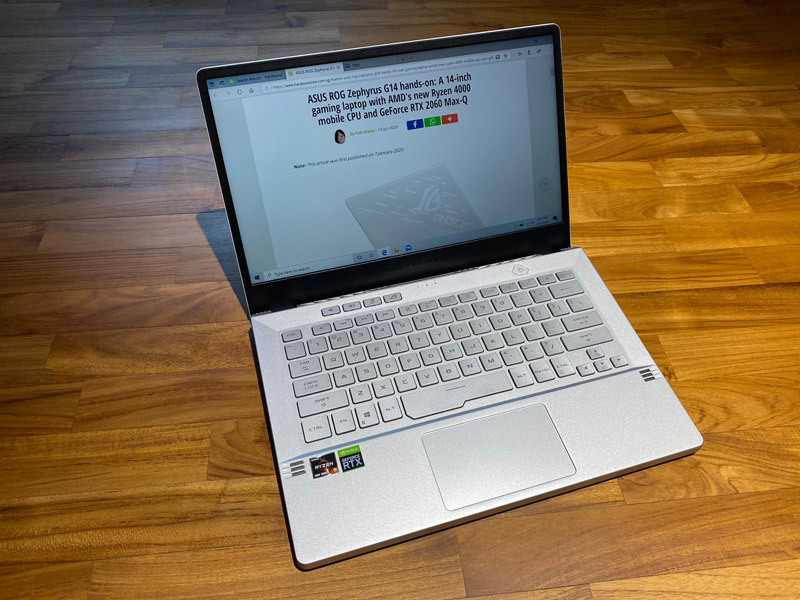 It is no secret that Intel processors have dominated the gaming notebook segment for the past decade, and the main argument in favour for an AMD Ryzen chip over an Intel chip centred on price rather than performance. Over the past few weeks however, I’ve spent time with a pre-production unit of ASUS ROG’s newest 14-inch Zephyrus G14 gaming notebook and came away with the impression that AMD has released a CPU, the new Ryzen 9 4900HS, that could finally compete with Intel’s mobile solutions. Officially announced last month, these processors use the latest Zen 2 architecture and 7nm manufacturing to accommodate up to eight CPU cores and 16 threads for muscular performance. Tacked on to each processor is also a Radeon Vega graphics pulled from the last generation.

With the Ryzen 4000 series, AMD is catering for a diverse notebook market share with the release of five low powered 15W U-series chips alongside six 45W H-series for high-performance laptops, that also tout dedicated GPUs. This is a big game changer for AMD in the mobile space, as such a range strikes at the heart of rival Intel's offerings that populate the same form factors and power requirements. (Even the series naming sounds similar, don't you think?)

And it's the HS-series that are interesting for mobile gamers, as there are three of these processor models (4600HS, 4800HS and 4900HS) that run with a lower 35W TDP, and are installed in select notebooks that adhere to a stricter design standard mandated by AMD and collaboratively worked on by the manufacturer – like ASUS, in the case of the ROG Zephyrus G14 here. AMD claims these notebooks will offer the best balance between performance, battery life and form factor.

Incredibly, ASUS also revealed to us that it secured exclusive use of the 35W Ryzen 9 part for six months. They are literally throwing its entire lot behind AMD here, and if you are hoping for an Intel version of the Zephyrus G14, well tough luck as there are no plans now to offer one.

Haven’t we seen this Zephyrus G14 before?

Perhaps you’ve already read Wanzi’s first impression of it earlier this year, which also details the notebook’s specifications (if you haven’t, then I recommend you do) but let me give you the key highlights of the Zephyrus G14 anyway.

The Zephyrus G14 is the first ROG notebook to debut a new look, and as far as I can recall, to deviate from the usual “Mayan” pattern design seen in existing line of ROG notebooks. For starters, it is a pretty sleek and angular notebook, more closely resembling the minimalist design of Razer's Blade Stealth 13 than any of ASUS' recent ROG models. It is also available in two finishes – a dusky Space Gray colour and the starker Mirage White.

The test unit that ROG sent over is the Mirage White model. Now I do like the aesthetics a lot, but like Wanzi, I also found the silvery finish on its palm rests and keyboard a tad cheap-looking and boring. An all-white design or even a darker contrasting colour (black, perhaps?) for the palm rest and keyboard would have been my personal preference. That aside, the design can hardly be called plain. The most distinctive feature of the Zephyrus G14, however, is the perforations on the lid. There is a total of 6,536 CNC-machined holes on the surface, and they come together to create a matrix LED panel that can be customised with animations or your own custom text – for example, information such as the battery status and weather. It might come across as gimmicky for some, but at the same time I am also aware there are a lot of users who like to customize the looks of their notebook to no end. So instead of pasting a permanent sticker on the lid of a notebook, you can regularly update the panel to show something different each time.

Unfortunately, I was not able to test this part of the notebook to give my own assessment of it. The unit I had came with a few kinks (this, and even the Wi-Fi refused to work at first) out of the factory. Even though there is nothing else that prevented us from doing our regular benchmarks on it, I will save our final review and score once we receive a fully working review set in our hands.

So how did the ROG Zephyrus G14 performed? Let us find out over the next few pages.