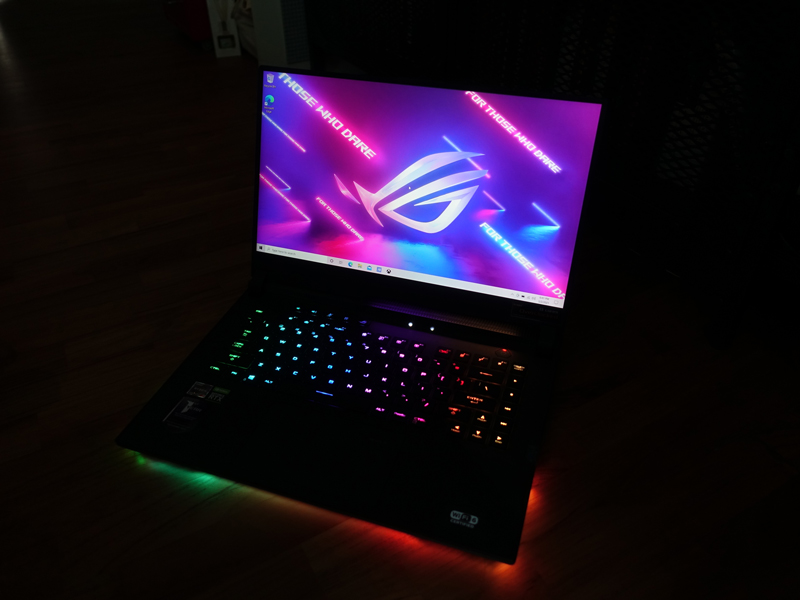 Leading the charge for 2021 gaming notebooks

With the 2021 version, the Strix Scar 15 (model G533) just got a whole lot more powerful. Released at this year's digital CES 2021 show, it's part of ROG's first salvo of gaming notebook options for 2021. You now have a choice of the latest NVIDIA GeForce RTX 30 series Laptop GPUs (up to GeForce RTX 3080) as well as AMD Ryzen 9 5000 series mobile processors to pick from. In fact, the test model that ASUS sent over would put most gaming desktops to shame with its GeForce RTX 3080 graphics processor with 16GB VRAM, Ryzen 9 5900HX CPU and a 15.6-inch FHD 1080p display with a speedy 300Hz refresh rate.

It’s a real beauty that’s bound to raise eyebrows wherever it goes – be it at a café, school or workplace - as long as you're ready to flaunt it. Provided you have got deep enough pockets for it, of course, which I will get to it later. But let’s take a closer look at the Strix Scar 15.

It’s kinda huge – for a reason 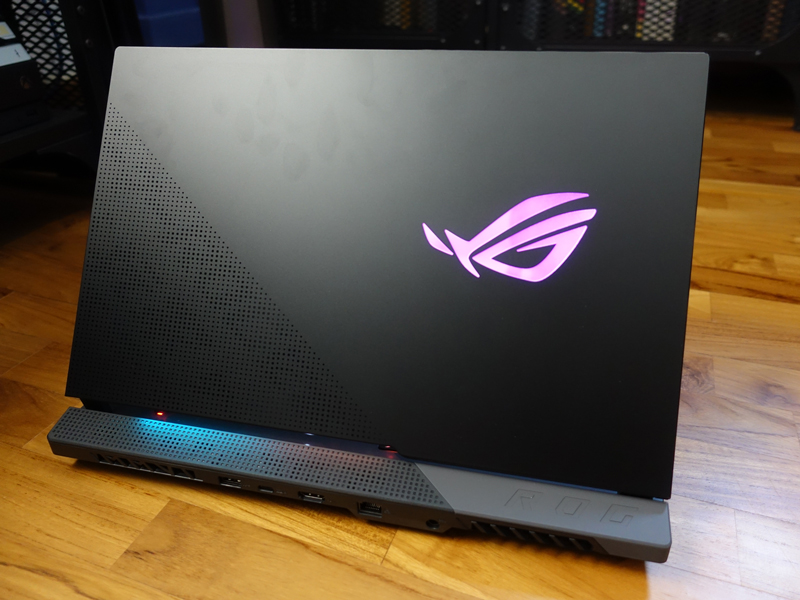 It’s fair to say that beauty is in the eye of the beholder, and not many will agree that the ROG Strix Scar 15 here – with its unwavering shamelessly loud RGB lights that just screams “gamer notebook!” – is easy on a layman’s eyes. But you know what? I kind of like its unbashful gaming charm. It’s certainly a big leap in design aesthetics over the once-upon-a-time ROG “Mayan-inspired” design style. The notebook’s build is largely plastic in construction, with only the lid clad in cold metal and a lovely silken satin finish to the keyboard deck. Overall, it’s a very solid build all around and what I would have come to expect from an ROG gaming notebook.

But it’s fairly chunky too, with a body frame measuring 354 x 259 x 27mm and weighing 2.3kg. But the big chassis is necessary for a reason – even though it must also be said that the new Strix Scar is noticeably smaller than last year’s model. 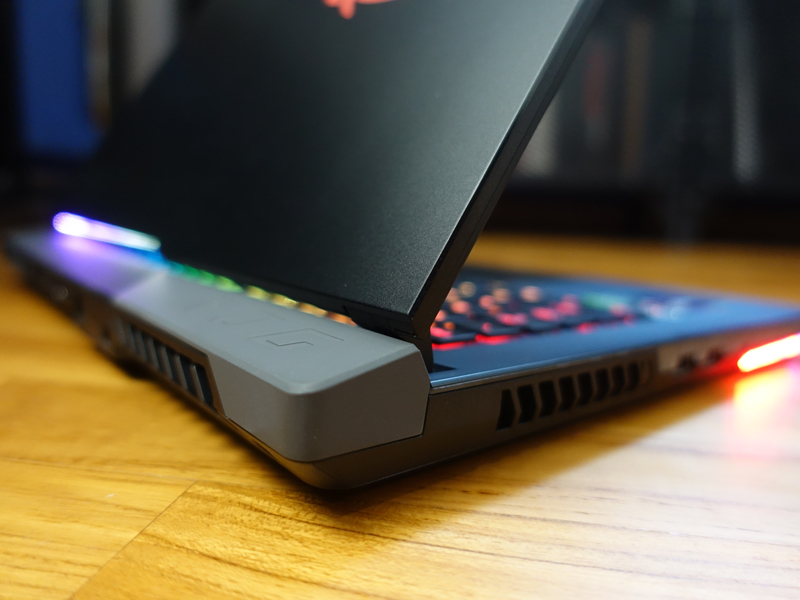 You see, the combination of AMD's topflight Ryzen 9 5900HX processor, 32GB of RAM and the 16GB variant of NVIDIA's flagship RTX 3080 GPU means that the Strix Scar 15 can run incredibly hot. All this heat needs to be dissipated efficiently, and the size of the notebook allows larger (and therefore more efficient) heatsinks and fans to be used than those on ultra-slim notebooks.

In any case, the 240W power adapter is a rather hefty 768g, so that means a total combined carrying weight of just over 3kg. As such, the ROG Strix Scar 15 is really more suitable as a desktop replacement (considering how common ultraportable notebooks are these days), with the occasional non-gaming productivity work, that you take on the go. 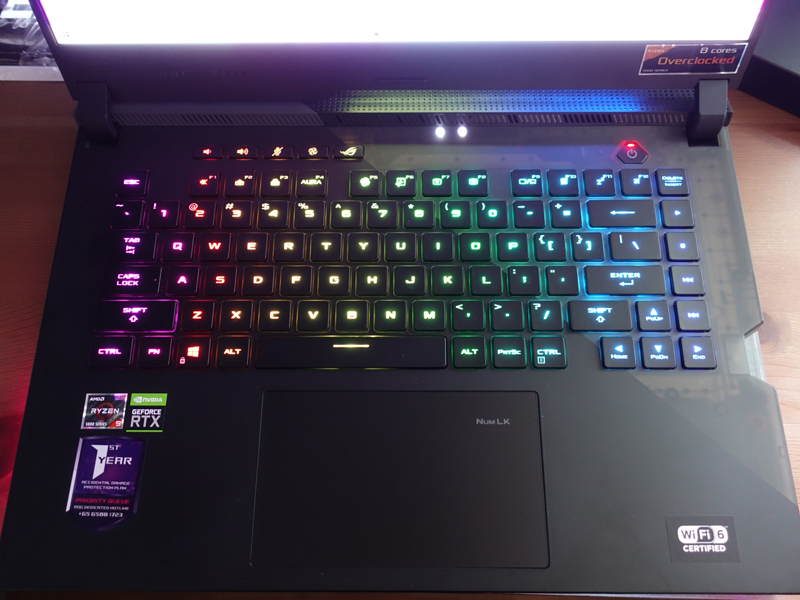 Special mention must go to the Scar 15’s excellent RGB-backlit keyboard. In what I think is a first for the ROG Strix Scar family, this year’s model comes with optical-mechanical key switches, giving everything a lovely tactile feel that’s absent in most non-desktop replacement notebook range. Each key also has loads of travel, making them just as pleasurable for typing up long documents for work as they are for playing games. 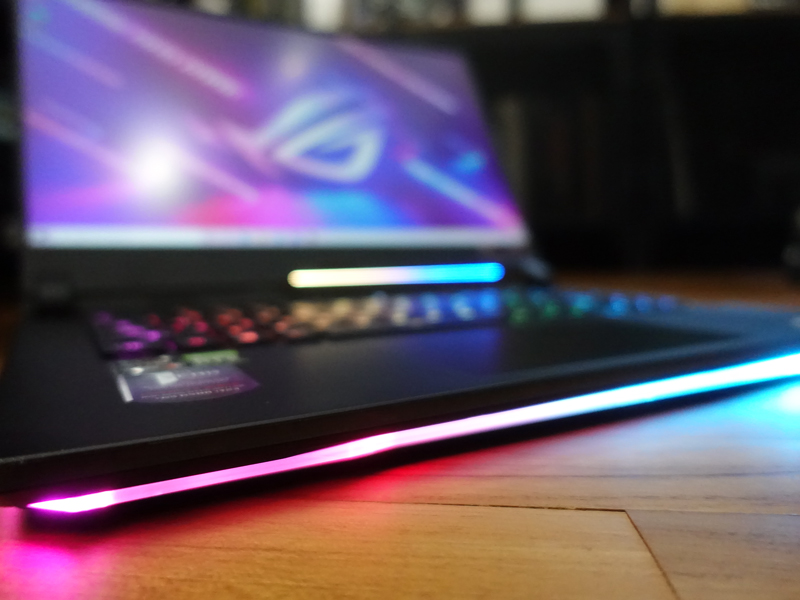 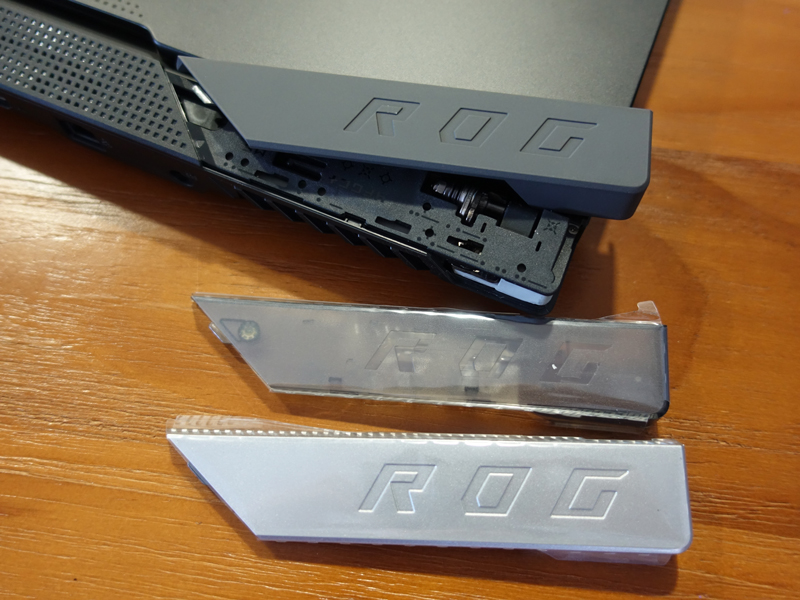 It also comes with per-key customisation and an LED RGB light bar stretching around the front edge of the laptop that can be set to match it. There’s even a short RGB strip set into the underside of the display, shining down on the vents at the rear of the notebook. If you’re an RGB freak, you’ll adore this Scar 15 to bits. The notebook even comes with “Customisable Armor Caps” that allows you to add your own personality on the top left corner. ASUS has included two additional Armor Caps in “Translucent Black” and “Spangle Silver” out of the box, but you can also 3D print your own with a template provided. 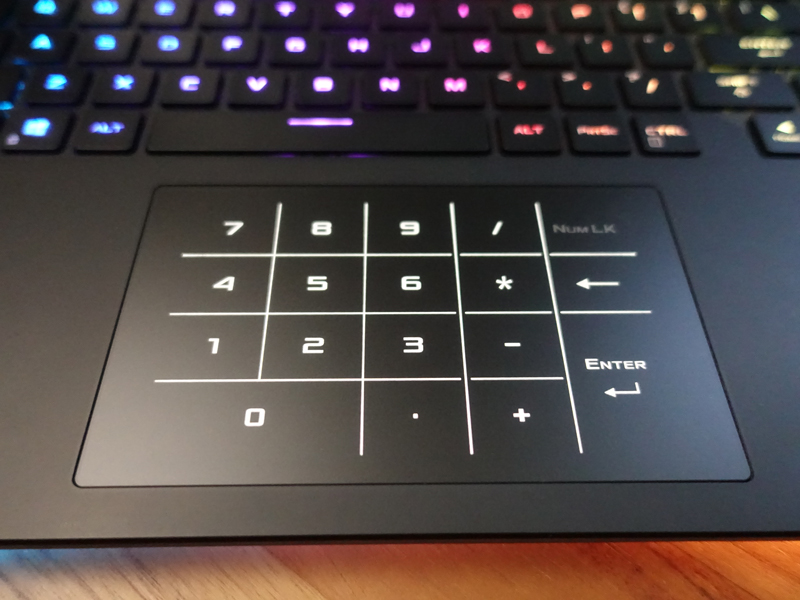 On the touchpad side, ASUS has made it 85% larger than previous Strix Scar model and is a glass pad coated in matte finish. This gives it added strength alongside a silky-smooth feeling when in use. One potential issue with such a large trackpad that edges a little too close to the keyboard (under the “Space” key) is the possibility of it getting in the way of one’s palm when typing, resulting in annoying accidental clicks or swipes. I faced no such issues, but if you have larger-than-usual hands than most, this could be a problem and your best bet is to stick to a mouse as an accompanying accessory and disable the trackpad. 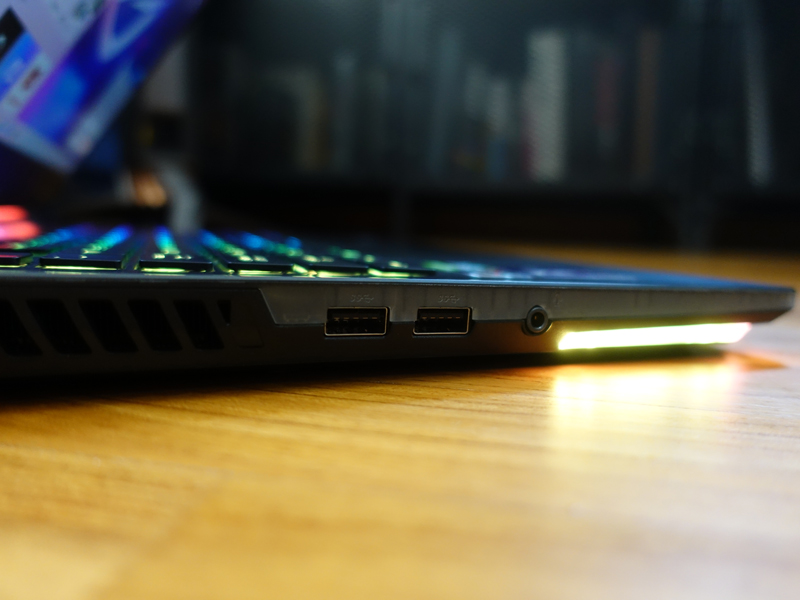 Connectivity is substantial and quite standard fare for a 2021 gaming notebook. There’s a pair of USB-A 3.2 Gen 1 ports on the left edge, and a single USB-C 3.2 Gen 2 at the rear alongside another USB-A 3.2 Gen 1 port, plus a Gigabit Ethernet socket, one HDMI 2.0b port and the system’s DC power input. For wireless connectivity, there’s Wi-Fi 6 and Bluetooth 5.1. There’s no built-in webcam due to the ultra-thin display bezel but ASUS has bundled in an external USB camera as part of the standard package – and it’s way superior to your run of the mill built-in webcam.

What about the Display? 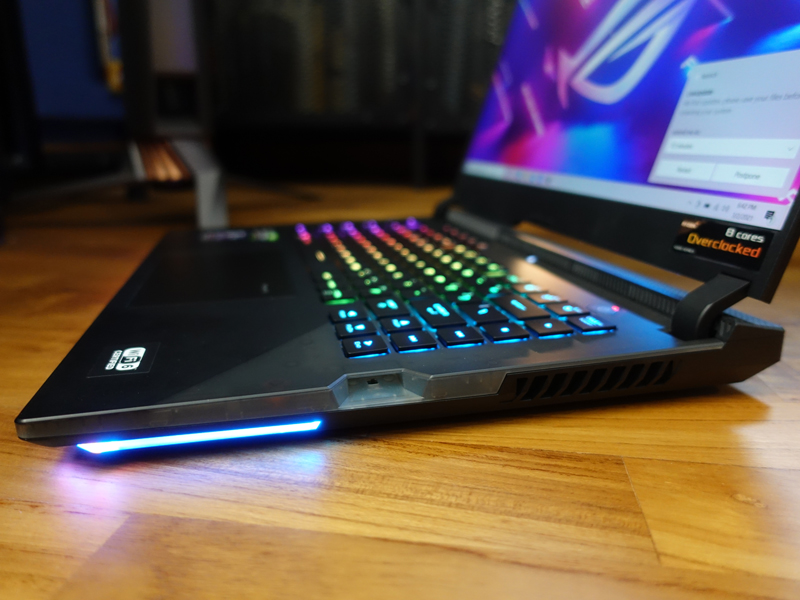 I’ve reviewed many ROG gaming notebooks, and one thing that’s always consistent across these notebooks is the quality of the display on them – they are always top-notch. The same goes for the newest Strix Scar here. The G533 variant, the one that I’m testing here, comes with a 15.6-inch 300Hz/3ms panel that essentially allows you to game at tournament-level fluidity. This is one heck of a speedy display. Peak brightness level, low black level and colour performance are top-notch too.

There’s no HDR support though, and the biggest bummer here is that the display can only support up to FHD resolution, aka 1080p. You are probably thinking that an RTX 3080 is crazy overkill for 1080p gaming, and I absolutely agree. A more sensible 1440p panel option is available in other markets, but unfortunately not in Singapore.

Now, let’s go through the most important part of my review on the next page: does it deliver on performance?

Write a Review
Compare This | Specifications
Attractive RGB light (yes, really)
Great performance and battery life
Solid, quality build
Excellent bundled external webcam
Great display
Expensive
Only supports up to 1080p
No card reader
Optical mechanical keyboard may not be for everyone
Our articles may contain affiliate links. If you buy through these links, we may earn a small commission.
Sponsored Links