While these resolutions may seem rather low-end compared to the QHD displays offered by competitors, I honestly can't see any difference in clarity between the 8, 8 Plus and the QHD 6.3-inch display on the Samsung Galaxy Note8.

Like last year, the iPhone 8 and 8 Plus displays are DCI-P3 wide color gamut certified, which is the standard used in the film industry, and essentially means that their displays can reproduce more accurate colors than the standard sRGB color range. A new addition to the iPhone 8 display is True Tone technology, first seen in Apple's 9.7-inch iPad Pro. True Tone dynamically adjusts the white balance of the screen to adapt its color and intensity to your environment. It does this through the phone's ambient light sensors, which also control the auto-brightness function.

While True Tone may just sound like a fancier version of Apple's Night Shift feature, it's actually a lot more advanced. Night Shift simply makes the screen warmer after a certain time. True Tone, on the other hand, is always measuring the ambient light around you and making micro adjustments to give you the most comfortable to view display. The result is a display that looks more like a piece of paper, which makes it less glaring and easier on the eyes.

The iPhone 8's stereo speakers have improved and are now much louder with noticeably deeper bass. It's worth pointing out that, like last year, the left side speaker grille on the bottom of the phone still seems to be purely decorational as sound only comes out of the right side (although it's not noticeable unless you put your ear right up against it). Stereo sound is achieved through another speaker located at the top of the phone under the ear piece. Stereo separation is also a lot more obvious this year, especially on the larger 8 Plus.

Like the iPhone 7, the iPhone 8 lacks a 3.5mm headphone jack. Instead, you get a pair of Lightning EarPods and a Lightning-to-3.5mm jack dongle in the box. A year on from the iPhone 7 and, personally speaking, I've found that the lack of a headphone port really isn't that big of a deal. I've taken to leaving the dongle on the end of my favorite headphones, and I've never actually needed to charge my phone at the same time as I want to listen to something anyway. If that's something you do want to do, you can always pick up some wireless earphones.

The iPhone 8 and 8 Plus run on iOS 11, which introduces a number of new features and interface tweaks. 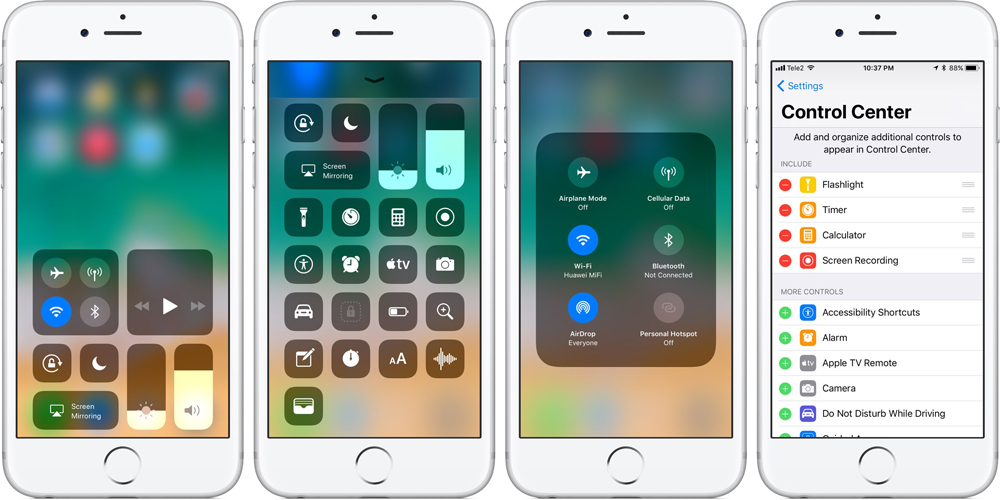 Siri has a new, more natural-sounding male and female voice (at WWDC, Tim Cook called this "an even more intelligent and natural Siri"), as well as a new visual interface. Siri will now also learn your habits to be more predicative about what you want next, based on your existing usage pattern. She also has a new translation feature for translating from English to Chinese, French, German, Italian, and Spanish.

The App Store has been re-designed for iOS 11. Opening the app will take you to a new Today tab, which will show you apps that are currently trending. Here you'll also see a Daily List of apps centered around a particular theme. There's also dedicated tabs for 'Games' and 'Apps'. Splitting the two makes it easier to browse for new content. There's a new Files app that keeps all of your documents in one easy-to-use place. You can drag-and-drop attachments from Mail or any other app into a particular folder, or create folders to help stay organized and find what you're looking for faster.

There's also a new QuickType keyboard option, which from the name sounds like it would be a tracing-style keyboard similar to Swype or Swiftkey, but actually just shifts the keyboard closer to your thumb for one-handed typing. Activate it by pressing and holding the Emoji button and you'll see an option to shift the keyboard to the left or right. Finally a huge new feature in iOS 11 is ARKit, Apple's new high-end Augmented Reality platform. Apple's website on ARKit states that it is a "cutting-edge platform for developing augmented reality apps for iPhone and iPad" and offers "powerful capabilities for positional tracking and scene understanding". We saw some of this at the iPhone 8 launch event where Apple demonstrated The Machines, an upcoming AR game from Directive Games. In the demo Directive Games CEO, Atli Mar, and his colleague were able to point-and-shoot an iPhone to create a virtual battlefield. Mar’s colleague could see his enemy's base on the screen and the more he moved around, the closer he was able to get to it.

We don't know the full potential of ARKit yet, but it looks very promising. For now though, we'll have to wait and see what developers do with it.

For a more in-depth look at what else you can expect from iOS 11 check out these articles: