The latest Apple iMac was announced on 23 October 2012. However, it was quickly overshadowed by the announcement of another Apple product - the iPad Mini. Because of the iPad Mini, much of the new iMac’s features and improvements were glossed over and largely ignored. This is understandable given the current emphasis and focus on mobile computing, but in actual fact, if one were to examine the new iMac closely, there’s a number of major improvements.

Most notably, the latest iMacs are much slimmer. This is not immediately noticeable when viewed head-on, but turn the iMac to the sides and you will notice that at the edges, the machine is just 5mm thick. This was achieved by removing the 2mm gap of air that used to separate the front glass surface and the screen itself and using a new method of welding called friction-stir welding to bond the glass and display together. According to Apple, a strong friction-generated heat is used to intermix the molecules of the two surfaces under pressure, creating a seamless and strong bond. Additionally, following in the footsteps of the MacBook Air and Retina MacBook Pro, the optical drive is now defunct. All of these contribute to the machine's ultra slim chassis; in fact, many would easily mistake it as a monitor rather than a full fledged system! 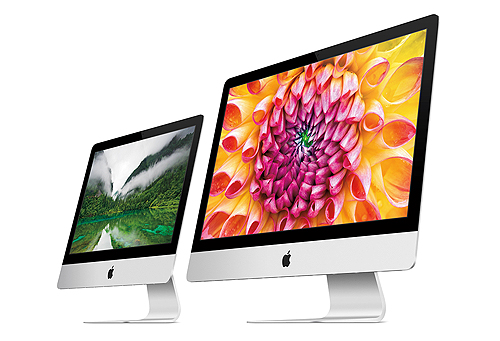 And as you shift and move the iMac around to appreciate its svelte profile, another thing that strikes you is how light the machine is. Our test machine, the 21.5-inch model that weighs just 5.68kg. The larger 27-inch model, in case you are wondering, tips the scales at just under 10kg. To get a sense of how light the new iMac is, consider this, the recently reviewed ASUS ET2400INTI with its slighter larger 24-inch display weighs 10.8kg.

While the edges might be just 5mm thick, there’s a considerable bulge in the middle of the display that houses all the hardware. Inside our iMac test machine is the latest third generation Intel "Ivy Bridge" Core i7-3770S processor that runs at 3.1GHz. Complementing it is 8GB of 1600MHz DDR3 memory, NVIDIA GeForce GT 650M discrete graphics with 512MB of GDDR5 memory and a 1TB Fusion Drive.

Additionally, Fusion Drive doesn’t cache files in the traditional sense of the word. What actually happens is that Mountain Lion will automatically move frequently used files onto the flash drive and keeps files that you seldom use on the mechanical hard disk. And in true Apple fashion, this takes place behind the scenes and requires zero user intervention. We'll be running time tests later to see if Fusion Drive technology translates to any real world performance gains.