As with the S10 and S10+, there are two processor variants for the Note10 and Note10+ depending on your region. In the US/China both phones are using Qualcomm's Snapdragon 855 processor, while the rest of the world gets Samsung's Exynos 9825 processor.

This is a new 7nm 64-bit octa-core processor that has two Mongoose M4 cores running at 2.73GHz, two Cortex-A75 cores at 2.4GHz, and another four power-efficient Cortex-A55 cores running at 1.95 GHz for less demanding applications. There’s also a Neural Processing Unit for machine learning tasks, and the Mali-G76 MP12 GPU for graphics found in the Exynos 9820 (first used on the Galaxy S10 series).

JetStream 2 measures the browsing performance of a device when processing JavaScript. It not only takes into consideration the underlying hardware performance, but rewards browsers that start quickly, execute code well, and run smoothly. It runs a total of 64 subtests for multiple iterations, with each benchmark weighed equally, taking the geometric mean to compute the overall score.

This is a somewhat new benchmark for us, so we’re still building up our database of scores. Based on the phones we’ve tested here though, we’d say the new Note10s performed above the average, slightly beating phones like Google’s Pixel 3XL and the Oppo Reno 10x Zoom.

The Note10 series phones were at least 16,000 points or 4% behind the OnePlus 7 Pro, which also runs with UFS 3.0 storage. Chalk it down to software optimisation perhaps. Either way, the Note10 and Note10+ are just keeping up with the competition.

This is one benchmark where the Exynos 9825 really separated itself from the older Exynos 9820. The Note10 and Note10+ produced scores of 5,424 and 5,301 which is closer to what the Oppo Reno 10x Zoom scored with its Snapdragon 855 processor (5,512). There’s still a large gap to the OnePlus 7 Pro though, as that scored 6,039 to lead the pack. But as far as catching up with the Snapdragon processor-based rival is concerned, the new Exynos 9825 in the Galaxy Note10 series seem adept.

Geekbench CPU is a cross-platform processor benchmark that tests both single-core and multi-core performance with workloads that simulate real-world usage. Geekbench 4 scores are calibrated against a baseline score of 4,000 (which is the score of an Intel Core i7-6600U CPU processor). 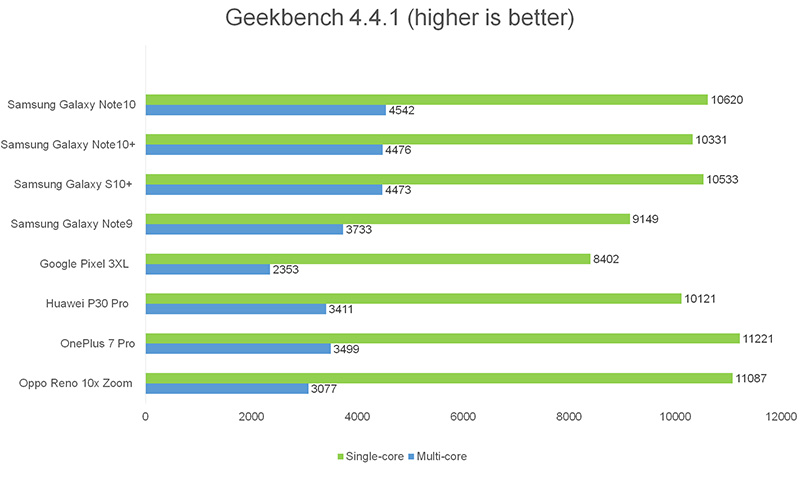 The Galaxy Note10 has a 3,500mAh battery while the Galaxy Note10+ has a larger 4,300 mAh one. Both support Fast Wireless Charging 2.0 as well as Super Fast Charging for faster charging wired (compatible with QC2.0, AFC, and PD3.0.)

You will also be able to wirelessly charge Qi-enabled devices like the Galaxy Watch and Galaxy Buds by placing them on the Galaxy Note10 through reverse wireless charging. Something that may be handy if you have only one power bank and really need to charge another device perhaps?

Because it supports up to 45W wired charging (only the Note10+), Samsung says just 30 minutes of charging will have the Galaxy Note10+ sufficiently powered for a full day’s use. However, the 45W charger isn’t included in the box and is a separate purchase.  Our battery tests were done with the standard 25W charger included in the box.

We expected to see better results from the Note10 devices on this test, given the use of the new 7nm Exynos 9825, but it appears the larger, brighter screen negates the advantage of the more efficient processors. The Note10 lasted a good 11 hours and 32 minutes, while the Note10+ lasted 12 hours and 15 minutes. That’s quite a bit behind the S10+ and the Note9, so it is a little disappointing. Would the efficiency improve over future firmware updates? We can only hope, but for now, this is what you should expect. It's not bad, but we expected better.

That said, we never had any issues with battery life in our real-world usage of the phones. The speed of USB-C charging seemed to ensure that the phones were always getting a quick top-up every time we plugged in to do a quick photo dump or to test DeX out. 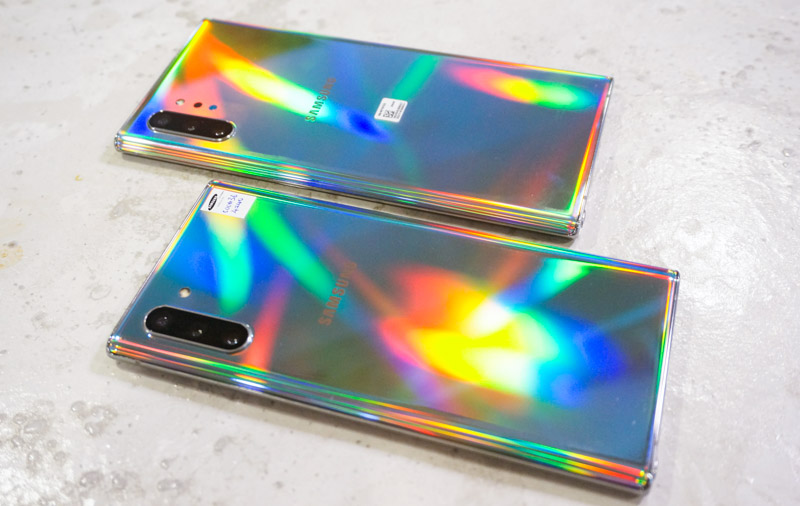 The Galaxy Note10 and Galaxy Note10+ are undoubtedly among the nicest looking phones we’ve seen released so far this year. The slim body design also helps to negate the sheer size of these phones, so that they seem to actually fit better in your pocket than something smaller like the Oppo Reno 10x Zoom.

In terms of multimedia, the Dynamic AMOLED Infinity-O displays are certainly very eye-catching, and they’re paired with a good set of speakers that deliver a satisfying viewing or gaming experience right out of the box. While the battery performance seemed a little underwhelming in our benchmark tests, that never seemed to be an issue in our day-to-day use of the phone.

Samsung has been pushing these phones heavily as productivity tools rather than to focus on processing power. This certainly shows in the usability improvements to DeX as well as the added handwriting-to-text conversion capabilities of the S Pen among others.

Being able to edit videos straight from your phone is certainly a welcome addition given how much we’re all turning to video now. And we must say the augmented reality features are an interesting touch that go a step beyond your usual animated emojis. While there are several third-party video editing apps (free and paid) that can meet your variety of needs, the point Samsung is trying to make is to give you adequate tools and functionality out-of-the-box without having to rely too much on third-party apps - something that majority of consumers can readily appreciate.

So, the feature set is certainly there. We just wish they were matched with processing power and/or longer battery up-time to blow the competition away to better justify the higher price points. If you’re looking at getting a new Samsung phone though, we’d say the Note10 and Note10+ (256GB) are certainly worth considering over the S10 and S10+ (128GB) as you’re only paying S$100 and S$200 more respectively for a better processor, a larger screen, and of course, the added S Pen capabilities. Also, Samsung has actually kept the Note10 pricing on par with the Note9, but yet doubled the storage capacity and made it a better Note than ever before.

Personally, I’d go for the Galaxy Note10+ (256GB) version as you’re not paying that much more compared to the Note10 (S$200). That 6.8-inch screen really doesn’t feel so over-sized when it’s that slim, so paying an additional S$200 for the larger display, more RAM (12GB vs 8GB), more battery capacity, and the extra depth camera for future AR applications seems well worth it. Not to mention, the Galaxy Note10+ allows you to expand the storage via microSD cards, but the more compact Note10 does not.

Should you go all out to get the 512GB edition? It's a bit difficult to recommend at its S$300 premium considering cheap expandable storage is a readily available option. However, if maximum speedy storage is a necessity - especially if you plan to shoot, edit and store a lot of videos on-the-move, only then the premium would seem more worthwhile.

Having said that, if you've always been avoiding the Samsung Galaxy Note series because it's too large to pocket, you can totally be sure that the smaller Galaxy Note10 is the most compact and handy Galaxy Note ever made. And that's exactly what Samsung was trying to achieve with its latest phone: to make the Galaxy Note10 series appeal to more consumers than ever before.

All ready to grab a Note10 or Note10+? Head here to see which telco to go with if you're looking to get your phone at a discounted rate. Thinking of getting the phone without a contract using SIM-only plans? We've got you covered here.