Note: This article was first published on 24 August 2019.

Welcome to the Galaxy Note10 and Note10+ 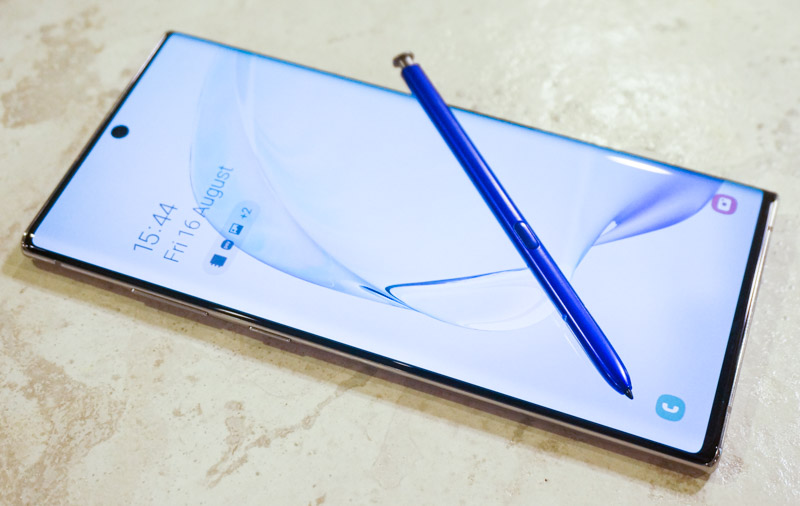 Say Samsung Galaxy Note series and you’ll think bigger display, long battery life, high-end hardware and of course, the S Pen stylus. Things didn’t change this year, but Samsung’s approach has, as there are now two versions of the Galaxy Note – the Note10 and the Note10+. You have probably read our hands-on from the launch event and here's the full review of these new flagship-class phones.

Measuring 151.0 x 71.8 x 7.9 mm, the 6.3-inch Galaxy Note10 is smaller and handier, while the larger 6.8-inch Galaxy Note10+ measures 162.3 x 77.2 x 7.9 mm, gives you a lot more screen real estate. Samsung has made sure that both have Dynamic AMOLED Infinity-O displays, and essentially the same processor setup, so the experience doesn’t differ too much regardless of the size of display you choose. 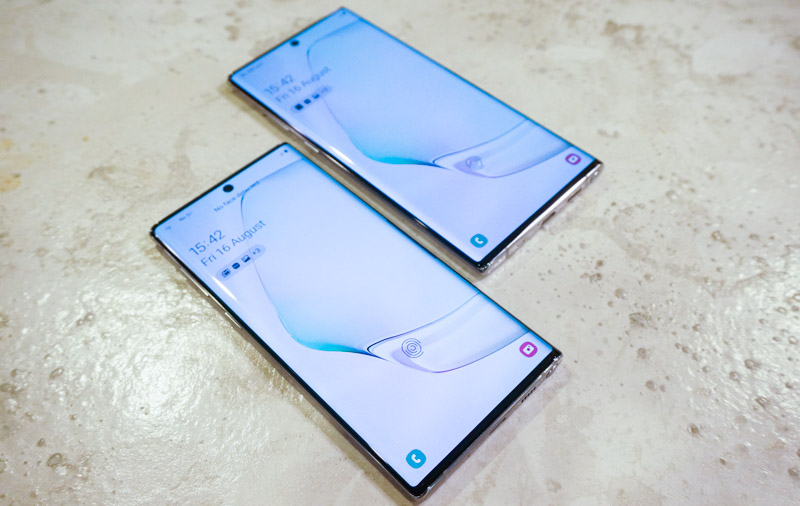 If storage expansion is important to you, note that only the Galaxy Note10+ comes with a microSD slot and storage can be expanded by up to 1TB via a microSD memory card.

Of course, the iconic S Pen gains some new tricks too, which we’ll cover later. In the meantime, here’s a table that lists out all the key specifications of both phones.

If you’re wondering how the Note10 series phones differ from the previous Note9, check out this video: 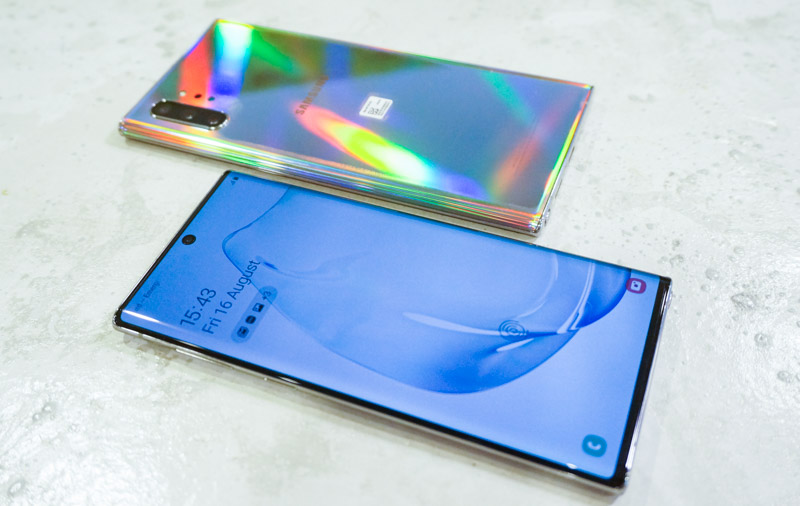 The Galaxy Note10 phones now come in what Samsung calls “Prismatic Colour Perspective design”. The entire body is fairly glossy, so light reflects off the back of the phone nicely. That’s especially obvious with the Aura Glow colour you see here, as that seems to give a rainbow effect depending on how the light hits it.

The edges are also more rounded now, so the phone is now completely symmetrical. With a screen-to-body ratio that’s greater than 94% (Samsung isn’t releasing actual figures), you’re getting a lot more screen than most phones. In fact, we’d say the larger Note10+ has more screen than the vast majority of the phone models in the market now. 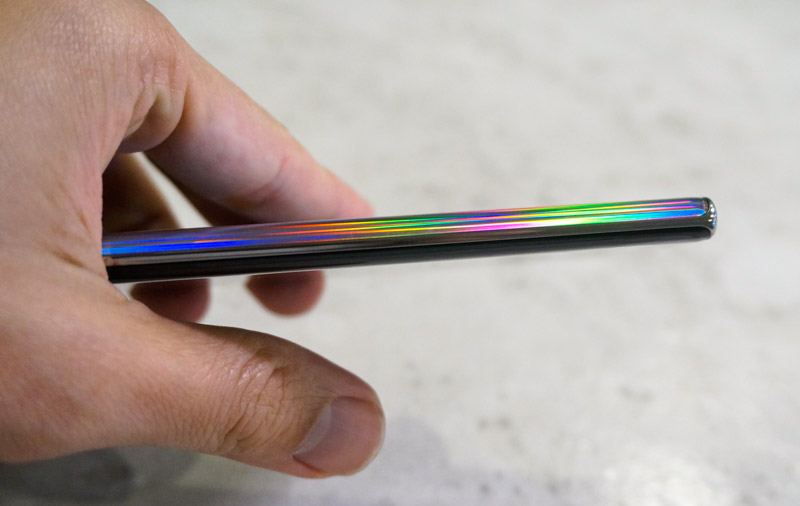 Both screens are HDR10+ certified and UI verified. The thickness of this phone or rather, the lack of thickness for a phone with such a large screen is impressive, and we feel the new design makes the phone fit more comfortably in your hand despite the size. 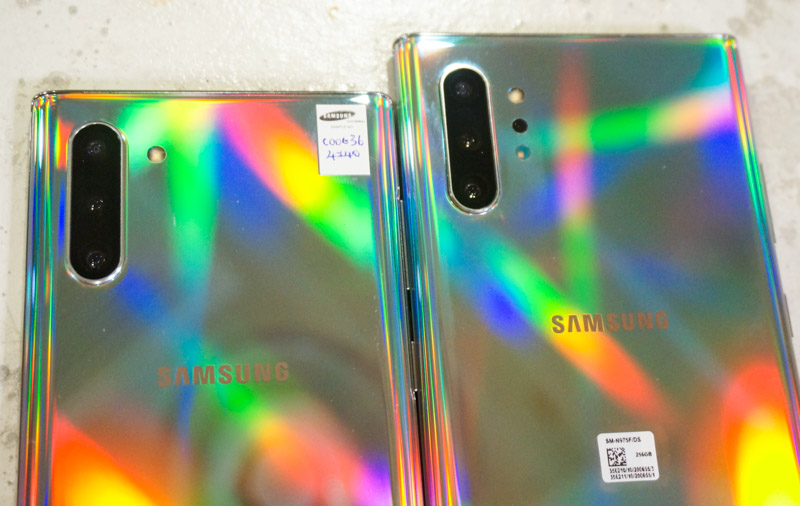 In terms of cameras, both phones get a triple camera configuration on the back. This goes back to the vertical orientation, with what looks to be very similar setup to what was found on the earlier Galaxy S10 series:

Additionally, the Galaxy Note10+ gets an extra VGA DepthVision Camera for AR and 3D applications.

At the bottom of the phone, there's the slot for the S Pen, a USB-C port, and a downward-firing speaker, but no headphone jack. The Note10 again features stereo speakers custom-tuned by AKG with the earpiece doubling up as the second speaker. Like the S10, the Note10 offers Dolby Atmos surround sound, both with headphones plugged in and through the phone's own speakers. 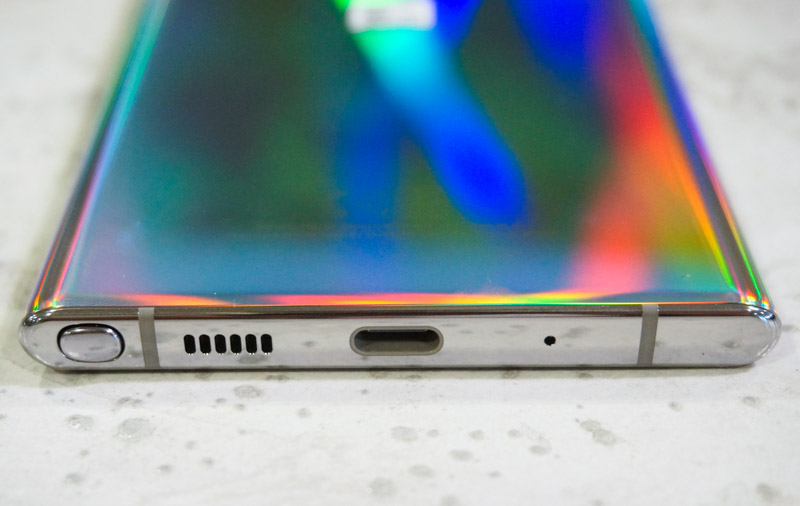 The power button can be found on the right side, while the volume rocker is once again on the left. But now there’s no longer a Bixby button. The improvement in voice recognition means you can activate Bixby or Google Assistant just by voice.

Both the phone and the S Pen are IP68 rated, so you needn't worry about a little dust and water. It's worth noting also that the colours of the S Pens will match the colours of the phone, with the exception of the Aura Glow, which gets a blue S Pen. That also means a more subdued S Pen instead of a striking yellow-gold colour scheme found with the Ocean Blue Note9.