Getting Started on Near Field Communication (NFC)

You may have seen recent TV commercials or shows that depict people using phones to transmit data between mobile devices with a single touch, or diners using their phones to make payments for their meals. Wonder what technology is behind all these feats? Well, it's all thanks to NFC and with so many new devices sporting this technology, from a variety of smartphones and tablets, to notebooks and even smart home appliances like the fridges and washing machines, we thought now's a good time for a nice primer on this subject matter, how it works and what it means for you. 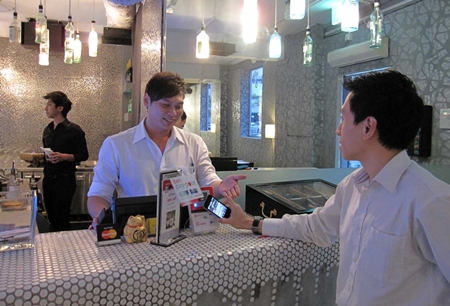 Near field communication, also known as NFC, is a form of wireless communication technology between modern mobile devices such as smartphones and tablets. Physically, the concept is fairly similar to how you would use the EZ-Link card locally; you tap or bring two devices close to one another to exchange information. However, unlike the stored value EZ-Link card, the phone helps conduct the transaction between the devices such as configuring them for usability or conduct a cashless payment via an e-wallet. We'll share more information on NFC usages later in the article.

NFC is basically an evolution of radio-frequency identification (RFID) technology. It uses magnetic field induction to enable communication between devices which are close together. Its operation can be explained in three sections: signal technologies, tag types and modes of operation.

There are three different signalling technologies used today by NFC devices to communicate with one another. They are Type A, Type B and FeliCa.

Type A communication, also known as NFC-A , deploys delay encoding or Miller encoding with amplitude modulation at 100%. In order for a transmission signal to be sent between devices, it must change from 0 to 100% to register the difference between "1" and "0". In case you are wondering what is "1" and "0", there are values representing a bit, which is the basic capacity of information.

Type B communication, also known as NFC-B, uses Manchester encoding with amplitude modulation at 10%. For a signal to be sent between devices, it must change from 90% for low ("1") to 100% for high ("0").

FeliCa, otherwise known as Felicity Card or NFC-F, is developed by Sony and widely used in Japan. It uses a slightly different variation of the Manchester encoding, and is faster and more popular.

Tags are integrated circuits with information stored in them that can read by NFC devices. There are currently four tag types used around the world. They are:

There are two modes of operation: active and passive. Active mode (initiator) means that both devices generate their own radio fields to exchange data, while passive mode (reader/writer) involves one device creating a radio field and the other using load modulation to transfer data.

An example of an active mode is the peer-to-peer sharing between NFC-enabled smartphones. In the Samsung Galaxy S III video ad below, the wife wants to share a video with her husband. Her phone acts as the initiator by sending out an invitation to connect while his phone is the target receiving the data.

On the other hand, an example of a passive mode is using a smartphone (reader/writer) to tap on a NFC tag. In the Xperia Smart Tags promo video below, the individual is seen using his Sony Xperia S to tap on several NFC tags to launch pre-configured apps and actions everywhere he goes.

NFC is widely believed to lead the next frontier in cashless payments. As such, NFC is usually associated with the term, "mobile wallet". Consumers can make their payments using their phones in restaurants, public transport's networks and supermarkets. Different countries have various applications of NFC, some of which are really interesting.

Countries such as San Francisco use NFC for their parking meters. Parking meters have NFC stickers on them, which have unique identifiers that inform the app on NFC phones which exact meter does it correspond to. This allows drivers to save the hassle of entering the meter number and eradicate any mistakes as well.

Japan, one of the few countries in the world where NFC is widely adopted, is believed to have launched the first commercial service worldwide that enables passengers to use their NFC phones as boarding passes for its Japan Airlines.

Several car manufacturers also explored the concept of NFC car keys. In April 2012, BMW collaborated with Vingcard, a hotel key card specialist to develop a way for its drivers to book a hotel room from its cars, download the room key to an NFC-enabled car key and receive special promotions. Hyundai recently demonstrated its NFC car key concept where it not only allows an NFC phone to lock or unlock a car, but also sync data and preferences from the car's infotainment system to the driver's phone.

Marie Claire magazine ran its first NFC print magazine advertisement in its December issue. The advertisements were placed by Nuffield Health, and offer a free two-day gym membership for readers who tapped on the page.

Declan Boyle, advertising director at IPC Innovator commented that NFC technology is an attractive tool for advertisers who are looking for ways to connect the offline print world with the online digital world. He also mentioned that as NFC print ads are immediate, measurable, dynamic and are low-cost platforms with flexible distributions, NFC will help in consumer engagement.