BlizzConline 2021 Interview: WoW Shadowlands' next update aims to shake the Maw up

Interview: World of Warcraft: Shadowlands' next update aims to shake the Maw up 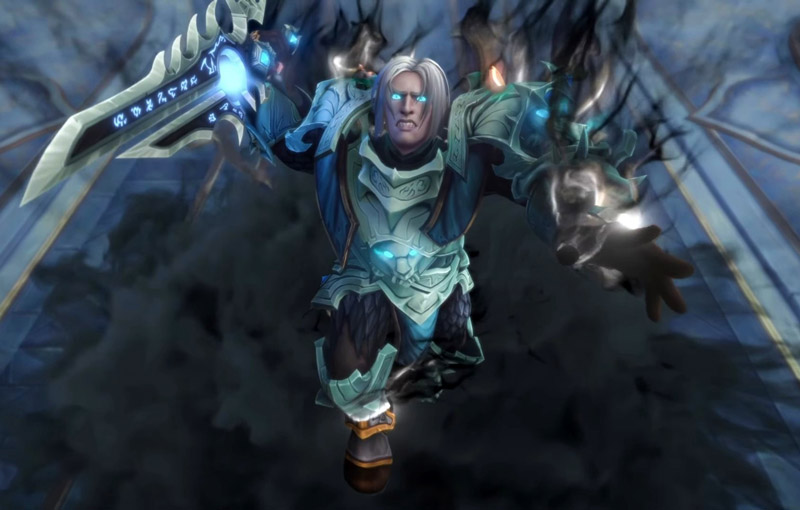 For Azeroth - I mean, the Shadowlands!

Blizzard Entertainment’s World of Warcraft: Shadowlands expansion has proven to be very successful for the company, so of course they'd want to keep players engaged with as much new content as possible. To that end, the company announced during BlizzConline 2021 that the next content update is bringing a wide variety of content for players to chew on, from a mega-dungeon to the continuation of Sylvanas’ story.

We talked to a couple developers on Blizzard’s Warcraft team to get the lowdown on Chains of Domination, the next big content patch for Shadowlands. Wondering what all the fuss is about? We got you.

The next chapter of Shadowlands’ story is long overdue, given that players have been left with a tense cliffhanger for some time now. Where the expansion ended, we saw King Anduin and Sylvanas together, with the latter holding him by the tip of a runeblade. Blizzard’s new trailer for Chains of Damnation picks up an unspecified amount of time after this, with Anduin suddenly waltzing into Bastion (malls have better security, apparently) and gaining an audience with the Archon.

What quickly becomes clear is that Anduin has been somehow corrupted, as he releases a dark wave of magic that renders the Archon and her Paragons helpless. He then takes the runeblade - yes, the same runeblade once held against him - and stabs the Archon with it. The poor Archon simply can’t catch a break. After this, he travels back to the Jailer, who retrieves the Archon’s energy from the blade and starts pulling Korthia, the City of Secrets into the Maw. Before this is all over, however, we see Sylvanas look at Anduin with a touch of regret on her face - signalling that although she’s been touted as the final boss of this patch’s climactic raid, we might see a redemption arc from her yet.

Story-wise, this is where we’re at. A new zone is being pulled into the Maw, housing many juicy secrets for players to uncover. The Jailer is one step closer to fulfilling his goal of wiping out everything. It seems like things have just gone from bad to worse despite our efforts to save the Shadowlands, but there is light at the end of the tunnel. In Chains of Domination, players can embark on a whole new campaign to unite all four Covenants against the Jailer, finally bringing everyone to the Maw for an action-packed final (?) confrontation. 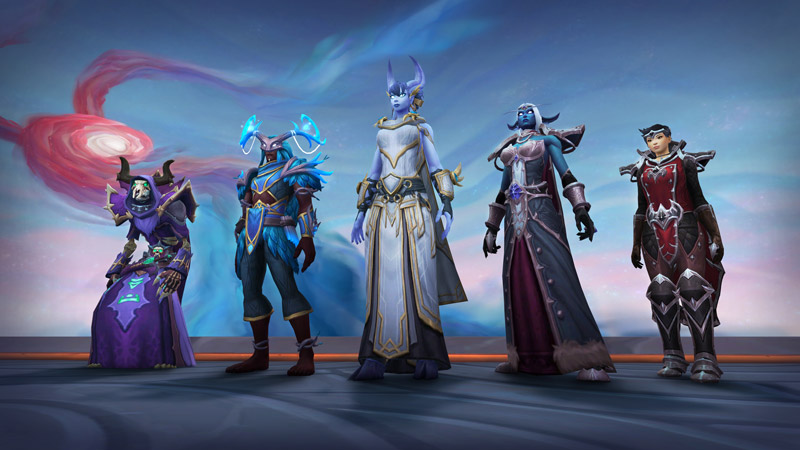 It seems like things are getting rather linear for players, after unique Covenant-specific story content was included in the Shadowlands expansion. However, Warcraft's principal game designer Jeremy Feasel assured us that we’ll get, “a little extra story,” from the Covenants we’ve chosen, that no one else gets. “No matter what covenant you're in, you're going to be able to see what happens next in each of the four Covenant zones. Everybody gets a taste of that. However, if you're in the Covenant for one of those zones, you'll definitely get a little extra story that nobody else gets… That's just to give players something extra special associated with their Covenants, because they probably know a little bit more about the characters associated with that quest line.”

This means that you won’t have to be in the Kyrian Covenant path to see the consequences of the Archon’s death, as you’ll basically be travelling through every zone and dealing with everyone’s problems in due time. Such is the life of a Warcraft champion.

The Maw is going through some big changes 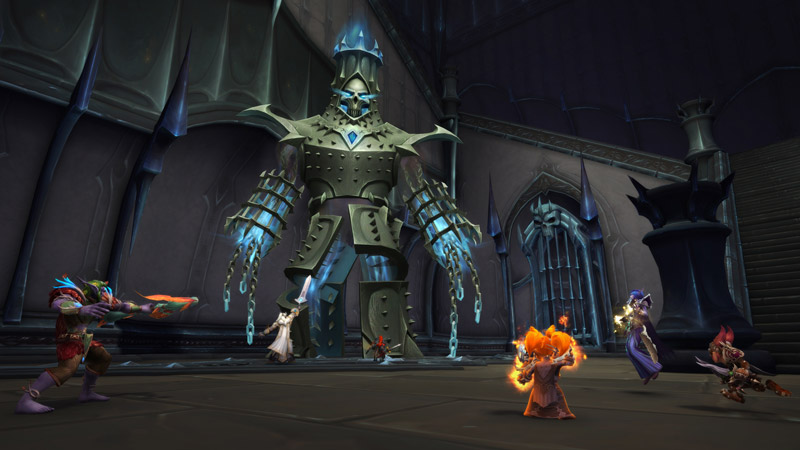 The Jailer might have brought Korthia down to the Maw to suit his own evil ends, but players are going to get plenty out of it too. Korthia’s appearance brings new quests for players to complete as well as outdoor activities, such as, “Mechagon-style visitors,” showing up to subvert the Jailer’s activities and investigate the city's mysteries.

On the outdoor activities, Feasel says that concepts seen in previous expansions will return in remixed form, such as invasions and assaults from Battle for Azeroth and Legion, “except this time, we're on the offensive. We’re taking the Covenant powers into the Maw and fighting alongside Maldraxxus and the Kyrians and all of our different covenant friends to take the fight to the Jailer.” As such, you’ll enter big locations and see, “a whole lot of things going on,” with a bunch of different quests and allies that need help. The big finale will see everyone rushing towards a boss together.

As you can probably tell, the Maw is going to feel like a very different place in Chains of Damnation. Feasel says it’s going to, “feel really efficient when you’re there, because you're able to get a bunch of things done at the same time, and it ends up feeling like a really good use of time at the beginning of the day.” Clearly, the idea is to give players a ton of content to play through that’s all available in one place.

Korthia will also solve a lot of the larger mysteries behind the Shadowlands. We’ll learn about characters we’ve met in Oribos like the Attendants and the Protector, find out why the Jailer is in the position he’s in, what the Arbiter is and more. Art director Ely Cannon says:

Korthia is an ancient city of the First Ones. These are the same group of people that were responsible for Oribos, so we’ll see some of the Attendants and similar creatures here. We'll also see an expansion of Ve’nari’s story in relation to Korthia. We delve into some of the additional motivations behind the Jailer’s actions, and we'll expose one of the things that he's been after this whole time in Korthia.

Previously, the Maw was a very oppressive place, and players could only spend a limited amount of time there before they were killed or forced to leave. Now that Korthia is a part of it, and the whole damn place has become a warzone, things have strangely become a lot safer. The Covenants’ collective presence lessens the harsh effects of the Eye of the Jailer, to the point that players can directly confront it and learn its origins. They can also finally summon mounts in the Maw, which should make getting around a lot easier. If this super-hell has frustrated you since the Shadowlands’ debut, rest assured - things will get better.

As if the raid wasn’t enticing enough, there’s a mega-dungeon too 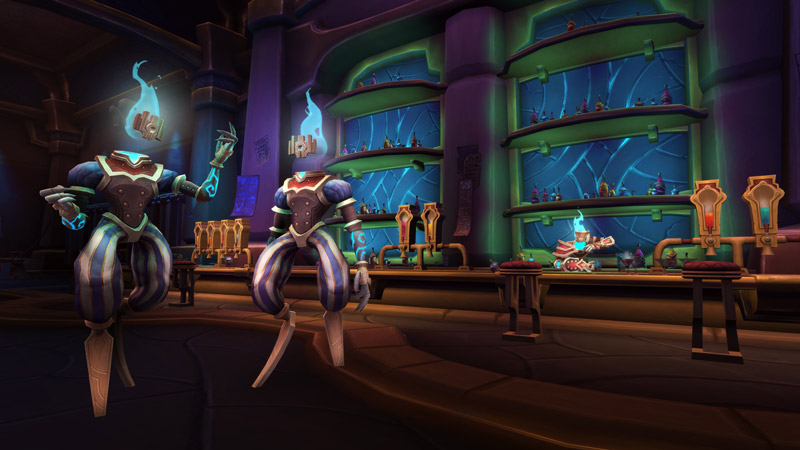 If you want to make a beeline towards resolving this whole Sylvanas-Anduin business, you’ll want to work towards the all-new 10-boss raid, the Sanctum of Domination. Here, you’ll touch unexplored reaches of Torghast, meet the true Eye of the Jailer, turn the tide against the Jailer’s pet Tarragrue and fight the Banshee Queen. At the end of it all? You’ll face off with the final boss: Sylvanas herself!

Game director Ion Hazzikostas assures us that the team is pulling out all the stops to make this fight as epic as it deserves to be, showcasing, “all the different sides of her identity and how she can enter combat, from the Dark Ranger that we've known for years, to the Banshee that we saw in Battle for Azeroth with the new powers that the jailer has given her.”

As for what else awaits players in the Sanctum, Hazzikostas says:

It’s really the inner lair of the Jailer at the heart of the Maw. We're going to reach it by going through a portion of Torghast and finally defeat the Tarragrue, the giant pet of the jailer that chases you out of Torghast and slays you if you die too many times currently. That gives us access to the Jailer’s personal domain, where we will be able to learn more of his secrets, fight some of his most powerful lieutenants, as well as encounter some of the souls that he has had in his safekeeping all this time, and maybe see some familiar faces along the way… the Lich Kel'Thuzad is one such foe we’ll face along the way, but there are others.

If you’re looking for loot, there be loot in the new mega-dungeon: Tazavesh, the Veiled Market. This will be an expansive dungeon set in a Broker bazaar holding, “crazy creatures,” that they have pulled from different worlds, according to Feasel. The team views it as an opportunity to really get weird with what they can throw at players in a mega-dungeon, as well as explore different aspects of Broker culture. You’ll zoom through the marketplace in the first half of this dungeon, after which you’ll chase down a Broker who’s stolen an artifact of power. Then, you’ll visit a lot of, “notable locations in Azeroth history,” which suggests some nostalgic scenery for Warcraft veterans. 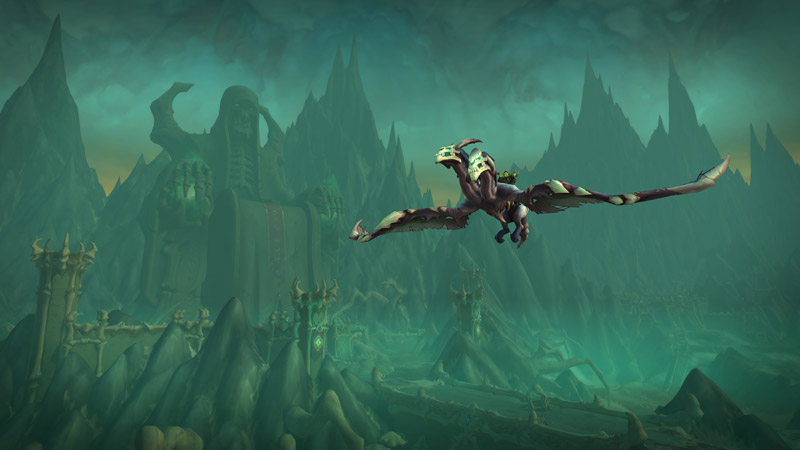 What else? Well, Chains of Domination will bring PvP Season 2, a seasonal Mythic Keystone dungeon affix, new Covenant cosmetic armour sets for any class to wear, expanded Soulbinds and Conduits, new mounts and pets, and flying for the Covenants’ four domains. As we mentioned in our earlier coverage, PvP Season 2 will see the addition of Vicious Mounts themed after the Ardenweald Gorm and an honour-talent refresh. The team plans to, “look at their honour talents that may not have been touched in a while, or ones that are underused, and see what we can do to help freshen up the PvP metagame,” says Feasel.

Gaining the ability to fly won’t be as complicated as past expansions, either. Hazzikostas confirms that, “Simply continuing through the Covenant campaign and finishing the new Chains of Domination story campaign will give players a custom Covenant mount that can fly, and unlock flying across the Shadowlands.” So… finish the entire Chains of Domination story campaign, easy peasy.

Unfortunately, we don’t have a release date for this patch yet - but at least we know new content is coming to the Shadowlands soon. Well, soon-ish.