Note: This article was first published on 7 January 2020. 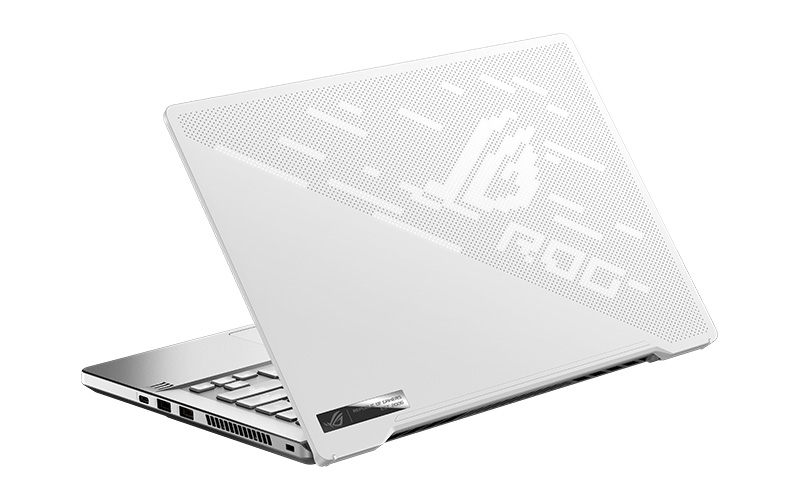 There's no shortage of slim and light 15.6-inch gaming notebooks today, but that description has always been relative to the glut of chunky designs that have defined gaming laptops in previous years. What if something like the Aftershock Vapor 15 Pro was still too large for you? Razer's answer to that was the Blade Stealth 13, a tiny 13.3-inch ultrabook with an NVIDIA GeForce GTX 1650 Max-Q crammed inside.

It was practically the only proper gaming ultrabook around when it was released, but ASUS isn't about to let that be the case for long. The company today announced the ROG Zephyrus G14, a 14-inch ultrabook that packs a GeForce RTX 2060 Max-Q. It's slightly bigger, but it's also a lot more powerful. The GeForce GTX 1650 Max-Q delivers passable gaming performance, but it still falls shy of maintaining an average of 60FPS in modern games at 1080p and High settings. The ROG Zephyrus G14's GeForce RTX 2060 Max-Q should manage that better, while allowing the laptop to still call itself an ultrabook.

It can be equipped with a GeForce GTX 1660 Ti too, in case you want to save some cash. 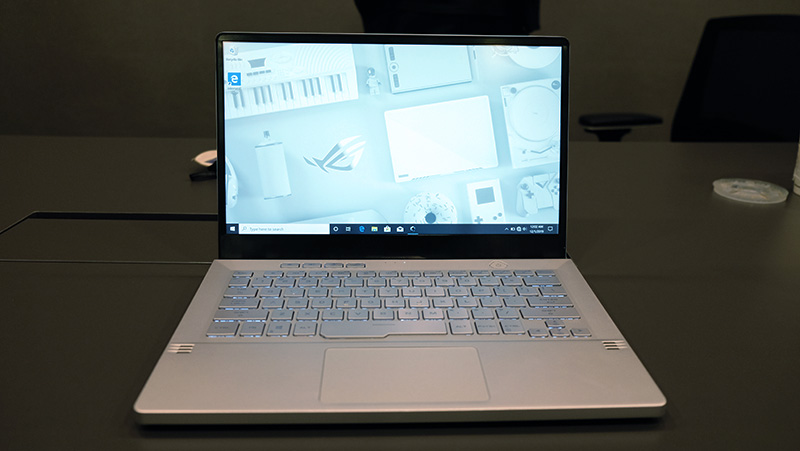 The laptop tops the Blade Stealth 13 in another important aspect as well – there's an option for a 120Hz 1,920 x 1,080-pixel IPS-level display, so you can enjoy a more fluid gaming experience, especially in less demanding esports titles where the GeForce RTX 2060 Max-Q should hit 120FPS with few issues. That's really nice to see on a compact laptop like this one, and it could very well be a deciding factor for someone choosing between the Razer and ASUS laptops.

The magnesium-aluminum alloy chassis weighs 1.7kg and measures 19.9mm thin, so it's really slim and portable. To cut down on the weight, ASUS says it went with a die-cast honeycomb structure that reduces the amount of material used while still preserving the overall strength. 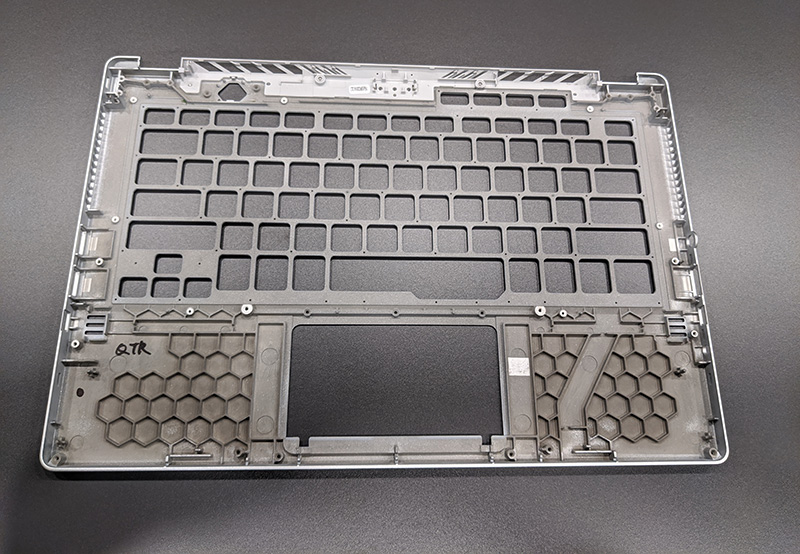 ASUS is also debuting a new look for the laptop, and it looks quite different from many of the company's existing line of ROG notebooks. For starters, it's a pretty sleek and angular notebook, more closely resembling the minimalist design of the Blade Stealth 13 than any of ASUS' recent ROG models. It's also available in two finishes – a dusky Space Gray colour and the starker Mirage White. 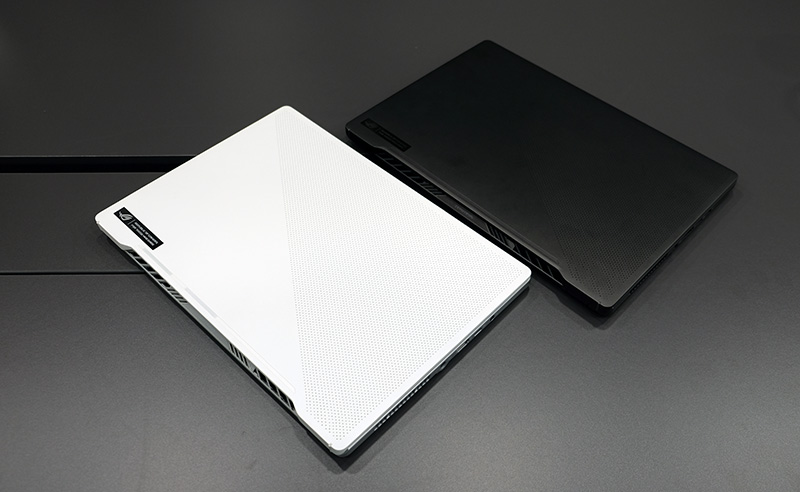 The Mirage White model has a silvery finish on its palm rests and keyboard, which I find looks a little cheap and boring. I'd much have preferred that the entire notebook be white to match the lid.

That aside, the design can hardly be called plain. The lid also boasts a metal ROG badge on the lid, which gives it the impression of a limited edition, one-of-a-kind product. 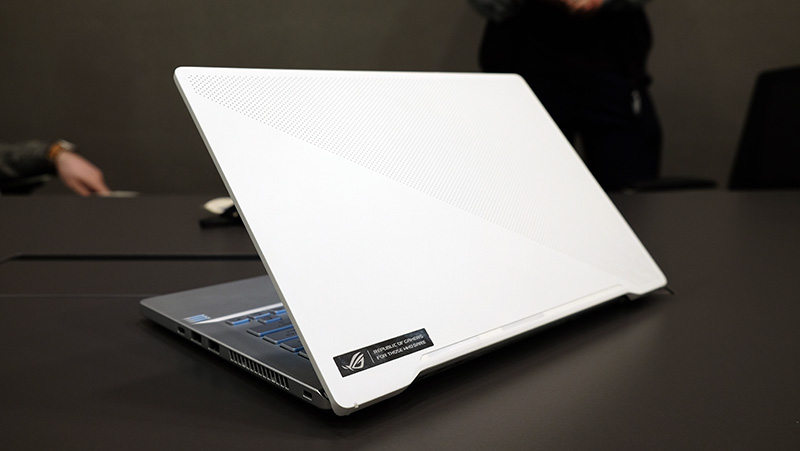 However, the most distinctive feature has to be the perforations on the lid. There are a total of 6,536 CNC-machined holes on the surface, and they're not just there for show. Instead, they come together to create a matrix LED panel that can be customised with animations or your own custom text. On top of that, it can display information such as the battery status and weather. I'm not sure why you'd want to have a battery indicator on your lid, where you can't actually see it, but I guess it's still kind of cool that you can display stuff there. Obviously, battery life will suffer if you leave the display on, so that's something you'll want to bear in mind if you intend to use it.

But if that's something you don't want, the laptop can also be configured without the panel, and it will be slightly thinner and lighter at 17.9mm and 1.6kg. Personally, this is the configuration I would go for since the whole reason you get a notebook like this is because of how portable it is. 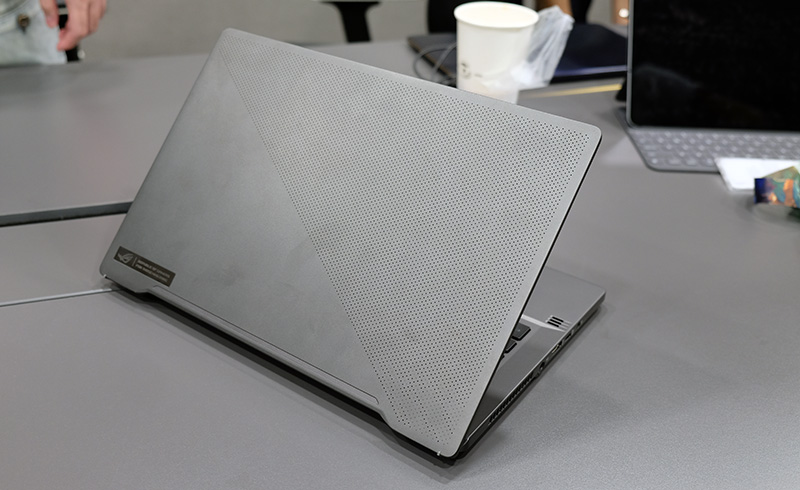 The other highlight is the ROG Zephyrus G14's use of AMD's just-announced Ryzen 9 4900HS processor, codenamed Renoir. In fact, ASUS says it's secured exclusive use of the 35W Ryzen 9 part for six months. It's throwing its entire lot behind AMD here, and there are no plans at the moment to offer an Intel version.

Other specifications include support for up to 32GB of DDR4-3200 RAM, a 1TB PCIe M.2 SSD, and an optional 2,560 x 1,440-pixel 60Hz display. Both the FHD and QHD versions of the screen have also been Pantone validated for better colour accuracy, according to ASUS.

The battery is decent-sized 76Wh battery, rather big for this class of notebook. ASUS says you should be able to get up to 10 hours of battery life from it, and it can be charged via both a DC connector or a USB-C port that supports Power Delivery. The latter means the notebook can be charged from portable power packs too, a nice touch. On top of that, it can do reverse charging up to 3A as well.

Elsewhere, Wi-Fi 6 is supported too, so it'll be able to take advantage of the latest routers.

Finally, here's a list of all the ports and connectors it comes with: 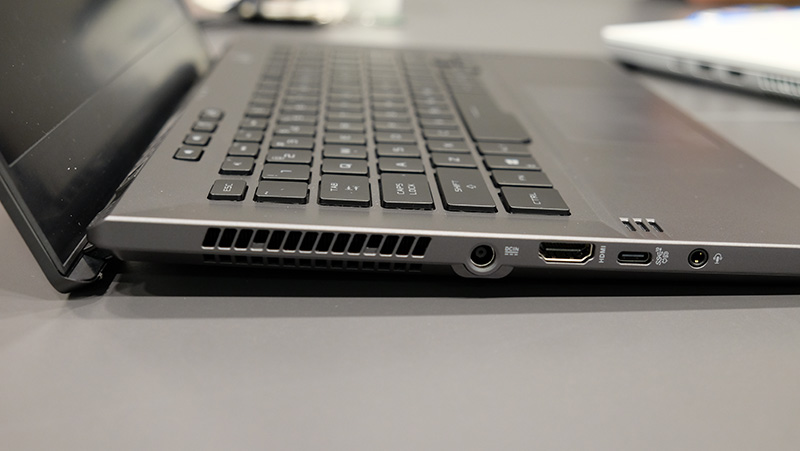 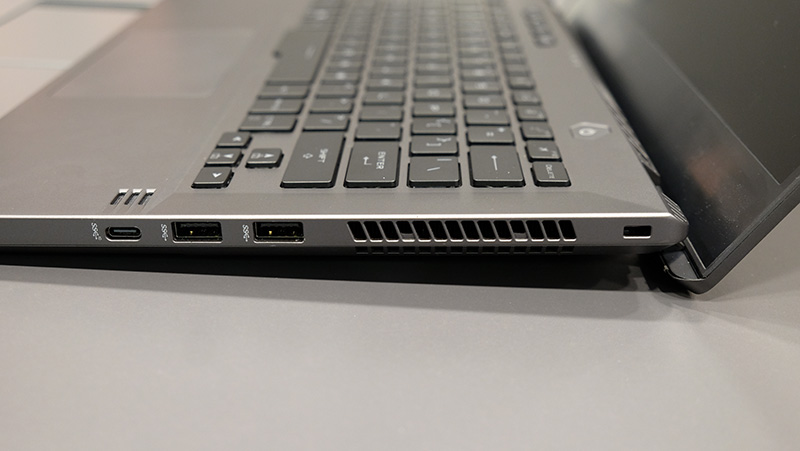 The only thing missing here is Thunderbolt 3, for connecting to a docking station or external GPU enclosure.

There is no integrated webcam, and ASUS has opted for an external ROG GC21 camera, the same as on its newer ROG laptops. It says that people don't make use of an integrated webcam that much, and it prefers to bundle a higher quality external unit that can do video at 1080p and 60FPS.

The keyboard has a 1.7mm key travel distance, which is quite good for a notebook of this size. There is only single-colour white backlighting however, a surprising choice for an ROG laptop. You've got a bunch of hotkeys at the top too, including ones for volume control and muting the microphone. 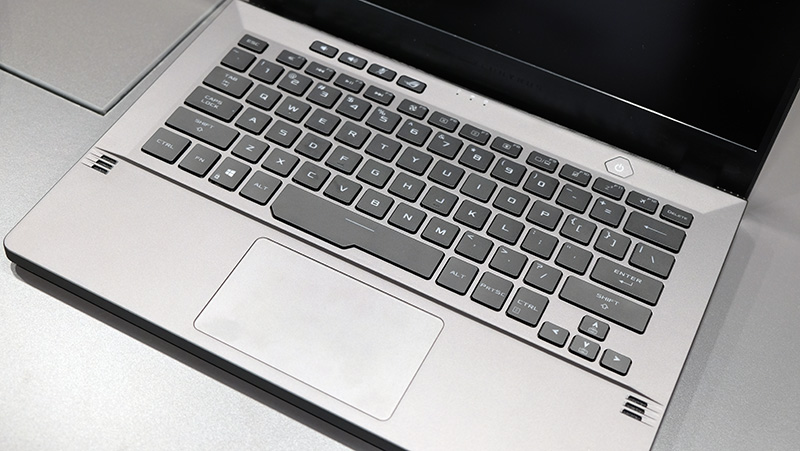 The power button sits above the keyboard, and it doubles as a fingerprint reader for sign-in via Windows Hello. It supports single sign-on too, which means that a single touch will power the laptop on and sign you in without you needing to do anything else. 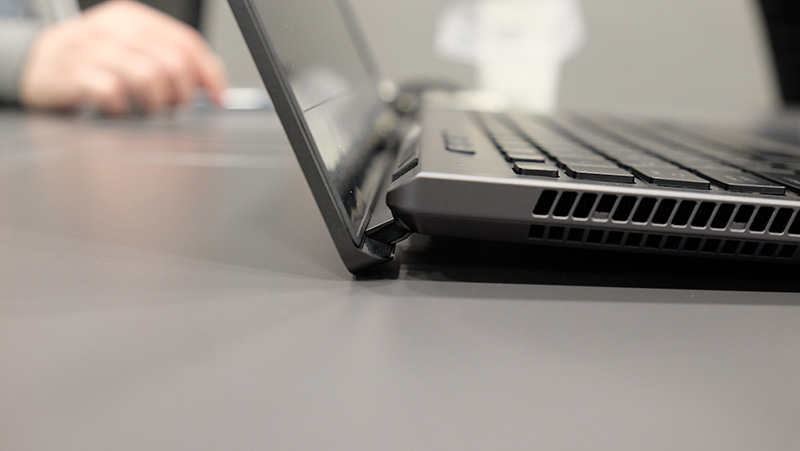 For speakers, the ROG Zephyrus G14 has two tweeters set in the keyboard frame and two woofers below the chassis.

The last thing that needs mentioning is the cooling system. The notebook has a total of five heatpipes and dual fans, each with 83 blades. It's also got four dense heatsinks located at the upper quadrants – these come with a total of 218 fins to increase the total surface area. ASUS' familiar anti-dust system is in place here too, in order to prevent dust from clogging up the system over time. In addition, there are other small design refinements, such as the heatsink fins shaped like an arrowhead that serve to direct hot air up and away from the laptop. 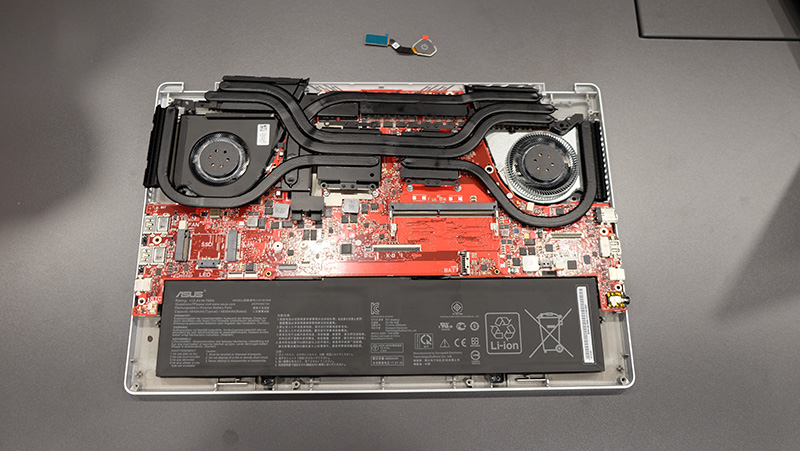 All things considered, the ROG Zephyrus G14 looks like it's shaping up to be a very capable gaming ultrabook. I'll have to get one in for review to see how it performs, but it's looking like a promising addition to this new category of gaming ultra-portables.