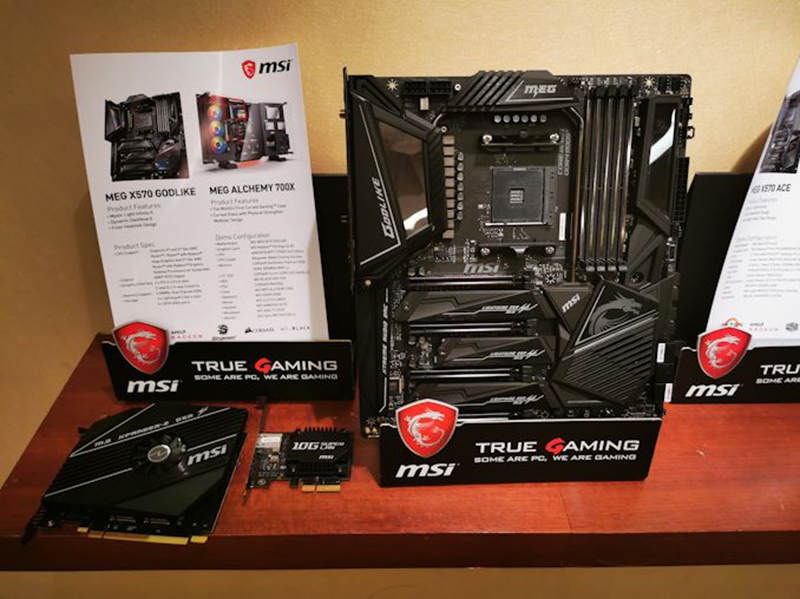 Just like the other motherboard manufacturers, MSI is stepping up its game in terms of its X570 offerings. It's shooting higher than ever before, and the MEG X570 Godlike marks the first time that it's bringing its flagship Godlike model to an AMD Ryzen chipset.

For starters, the Godlike features a 14+4-phase power design, comprising an IR Digital PWM controller, DrMOS power stages, and titanium chokes. It has a 14-phase power delivery system for the CPU's VCore, but it only features 7 true phases and relies on phase doublers.

In addition, it is equipped with dual 8-pin CPU power connectors and an eight-layer PCB, the latter of which helps accommodate the additional trace paths required to sustain the greater amount of power. According to MSI, it's actually using a server-grade PCB here in order to ensure PCIe 4.0 performance and better stability.

The X570 chipset is also expected to generate more heat and pull more power than its predecessor, to the tune of 11W compared to roughly 6W on X470. That's a big part of why you're suddenly seeing fans integrated into the chipset heat sinks of so many high-end X570 motherboards, and the MEG X570 Godlike is no different. Its integrated double ball-bearing fan works to keep to chipset cool, and it is also linked to the VRM heat sink via a single heat pipe to increase the surface area available for heat dissipation.

And speaking of cooling, one potentially useful feature is MSI's Zero Frozr technology, which you may recognize from the company's graphics cards. This is a smart tuning system that can automatically adjust fan speeds based on the chipset temperature, but it can also completely turn down the fans when system loads are low. 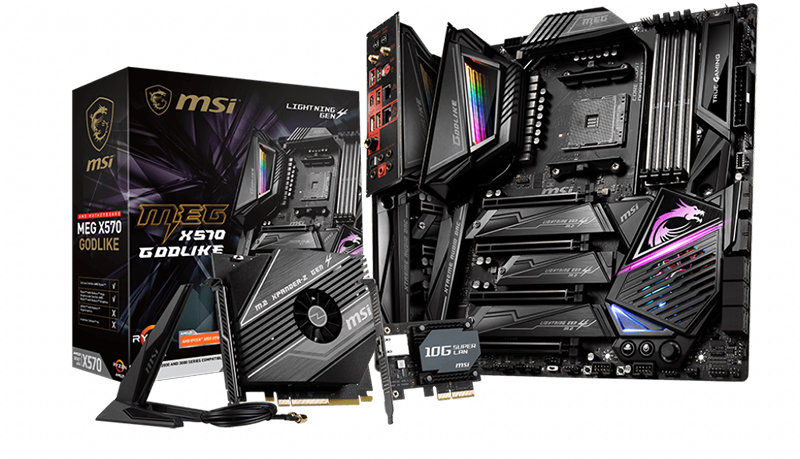 That aside, it feels like a big focus of the Godlike's design is on expandability. It features four PCIe 4.0 x16 slots, three M.2 sockets, and six SATA 6Gbps. On top of that, it also ships with a couple of expansion cards, including a 10G Super LAN card for ultra-fast connections if your network supports it and an M.2 Xpander-Z Gen 4 card that can hold two more M.2 PCIe 4.0 drives. The latter even has its own heat sink and fan to keep your drives running cool. Each of the motherboard's built-in M.2 sockets have MSI's Shield Frozr heat sinks as well to reduce thermal throttling.

Another nifty feature is the Dynamic Dashboard OLED display on the right. This can display system information like CPU temperature or be set to show off your own custom GIFs.

The audio solution comprises an ESS DAC and dual audio processors, paired with a 6.3mm audio jack at the rear so you don't need an adapter to plug in a high-end set of cans.