In May this year, AMD officially launched its Trinity Accelerated Processing Unit (APU) that features the next generation APU architecture. It is built on a mature 32nm SOI process technology, using a second revision of the Bulldozer architecture. At its launch, AMD only released mobile versions of Trinity APUs that will power ultrathin AMD platform based notebooks.

Now, AMD is about to launch the desktop versions of the Trinity APU, bringing its Heterogeneous System Architecture (HSA)  to desktop computing this time round. AMD's flagship desktop Llano series APUs, that were launched last in 2011, failed to make inroads with its touted ability to leverage on both the CPU and GPU portions of the APU to execute tasks in parallel for a balanced system architecture. With this Trinity update, AMD claims that its Heterogeneous System Architecture can run much more efficiently than ever before, as the CPU and GPU of the next generation APU work in tandem once more to run desktop applications with improved compute power and lower power consumption.

The official launch of the AMD A-Series Trinity desktop APUs is just next week on Tuesday, 2nd October. Due to its media embargo, we can only reveal certain aspects of the flagship Trinity APU, the AMD A10-5800K that we have in our possession. In order to keep our sneak preview of this new APU relevant, we shall focus on its graphical performance prowess, in particular, its performance levels for both DirectX 10 and 11 games. Last of all, we conducted a quick Blu-ray playback test to see how efficient its new Radeon graphics core can offload its CPU core for this HD audio-visual test. Hence, without further ado, we shall put the Trinity desktop APU through its paces. 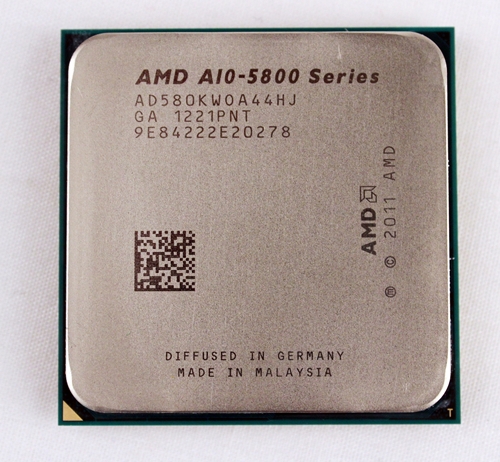 Using AMD's flagship A10-5800K Trinity APU, we are able to put its Radeon HD 7660D graphics core to the test and determine how decent its performance numbers will be. For comparisons, we've put together integrated graphics performance numbers that we've gathered previously from the Intel Core i7-2600K and Core i5-2500 that feature the Intel HD Graphics 3000 engine as well as the top-of-the-line third generation Intel Core i7-3770K processor and its Intel HD 4000 graphics core. We have decided to include our past results with a NVIDIA GeForce GT 220 (512MB) discrete graphics card to ascertain just how close or far off the performance of integrated GPU's capabilities against a low-end graphics card.

We also tried downclocking the Intel Core i7-3770K to the level of the Intel Core i7-2600K in order to create a level playing field of comparison for the Intel integrated graphics performance comparison. However as we found out, all of our tests are so GPU constrained that the difference in CPU speeds didn't matter one bit - the differences were too negligible. As such, the results shown are with the default CPU clock speed.

Given that the AMD A10-5800K Trinity desktop APU supports up to DDR-1866MHz officially (just like Llano), we did want to run it at this speed, but for some reason we couldn't get the board working stable to support this memory speed. From our tinkering, it did feel like a BIOS related issue that should hopefully get better in time to come. As such, for now we've set the clock frequency at 1600MHz in order to proceed with our performance testing. However even at this frequency, we couldn't get the memory to work at our usual test timings which are tighter than what's indicated above. In the interest of time, we've defaulted to memory timings that the board was comfortable to work with.

The test configuration of the third generation Intel Core i7-3770K processor is found here. The details of the older comparative test setups for the Intel Core i7-2600K and Core i5-2500 systems are found in our original review of the Sandy Bridge processors. Just for kicks, we've even included results from the first generation Core processor's original Intel HD Graphics engine. Note that for all three generations of Intel HD Graphics engines tested, we've set aside 256MB graphics frame buffer. There is no other granular option available other than to select maximum system memory, but it didn't make much of an impact.

We have included AMD's desktop Llano APU - the A8-3850 processor which has a built-in Radeon HD 6550D GPU engine, to see how this previous generation APU stacks up against the current one. The AMD A8-3850 is definitely doesn't have the same amount of compute power as the AMD A10-5800K even though both are targeted at the mainstream user group - in fact they cater to two different spectrums of mainstream DIY needs. Despite their compute discrepancies, we thought it would be great to see how much stronger discrete-class integrated GPU of the Trinity APU is against the older Llano APU. You can find the test setup of the Llano desktop system here but as a point to note, our testing of Trinity's Radeon HD 7660D graphic core was paired with a 512MB frame buffer, double that of all the integrated graphics engines tested from AMD and Intel prior to today's test (256MB). This shouldn't affect the compatibility of our results because we've tested higher frame buffer sizes for Llano previously, but they've not shown improvements at our test settings. In any case, the results at our test settings will show that even more horsepower is required before we can tax these integrated graphics engines further.

The following is the full list of benchmarks used to test the integrated graphics:

So read on for the performance breakdown of the new Trinity desktop APU in the form of the flagship AMD A10-5800K!

For this DX10 benchmark, the AMD A10-5800K came in second and it was just trailing by a 3% margin behind the discrete GeForce GT 440! In terms of improvement over the Llano APU, the new generation Trinity edged out the older APU by a margin of 48%. We understand that 3DMark Vantage also factors in the CPU's capabilities in computing the overall score; hence, its performance against the Intel Core i7-3770K that was paired with a discrete NVIDIA GeForce GT 440 graphics card was rather impressive as this result seems to point to a decent showing of the general compute performance of the AMD A10-5800K APU. The Trinity APU outperformed the Intel HD 4000 integrated GPU by 39% and extends its lead over the previous iteration of Intel's integrated GPU of the Intel Core i7-2600K by almost 170%. We expect to see strong DX10 performance levels for Far Cry 2, having seen the theoretical graphics performance numbers in 3DMark Vantage. The A10-5800K's internal Radeon HD 7760D took second position again, trailing the leader in this comparison by just a margin of 11% as it churned out an average frame rate of 59 FPS. Its performance over is predecessor is evident as the older generation Llano's average frame rate is almost 50% lower. After ascertaining the performance strength of the AMD A10-5800K for DirectX 10, we put it to the DirectX 11 test by using a game that support it - Battlefield Bad Company 2. Take note that in this game, the results should be taken in with care - there's a mix of DX10 and DX11 capable GPUs for which the latter will run the game utilizing DX11 routines. As such, the scores aren't exactly comparable. In this test, the A10-5800K trailed behind the discrete GeForce GT 440 by a margin of almost 55%; it even performed lower than the Llano-based A8-3850 APU by a margin of 20%! Its performance against the two generations of integrated GPUs from Intel is approximately in the same grain as we have uncovered our earlier performance benchmarks. The integrated Radeon HD 7760D engine did outpace the Intel HD Graphics 4000 DX11-compliant integrated GPU by a large margin of  approximately 56%; however, the former's DirectX 11 performance show here will mean that AMD needs to churn out updated drivers in order to bring its performance up to par in the future. In terms of CPU utilization for our Blu-ray playback, the Trinity APU saw the performance of its integrated Universal Video Decoder trailed behind that of the older Llano APU by margins in the range of 37% to 42%. From this set of results, the performance of the AMD A10-5800K seems similar to the third generation Intel Core i7-3770K CPU, until the latter is paired with discrete graphics cards. As expected, the AMD A10-5800K also saw marked improvements over the previous generation Intel Core CPUs and their Intel HD Graphics 3000 integrated engine. Based on our current results, the AMD A10-5800K APU turned in impressive DirectX 10 performance levels; however, due to the infancy of its graphics drivers, it didn't turn in good results for our DirectX 11 gaming benchmark; however, it did churn out average frame rates that were above 30fps in our medium quality test settings. Hence, for gamers who have more demanding gaming requirements, a discrete graphics card is still a must when playing games on high quality settings and video resolutions.

When the Trinity APU is compared against the previous generation Llano, it seems like a case of going forward one step while unknowingly taking two steps back. It performs better than the Llano on DX10 gaming benchmarks; while trailing behind the previous generation APU in our DX11 tests as well as CPU utilization during our Blu-ray playback tests. As a newer generation APU sporting new Piledriver cores, the results turned in by the A10-5800K were truly unexpected in this case.

For now, we are left with the impression that the flagship Trinity APU delivers in terms of DirectX 10 gaming; however, we do hope its lackluster DX11 performance will be improved as we see graphics driver updates in the near future. As for ascertaining the true lineage of the Trinity versus the older generation Llano, this calls for more thorough testing and analysis of the results. In the meantime, do watch this space for more updates.