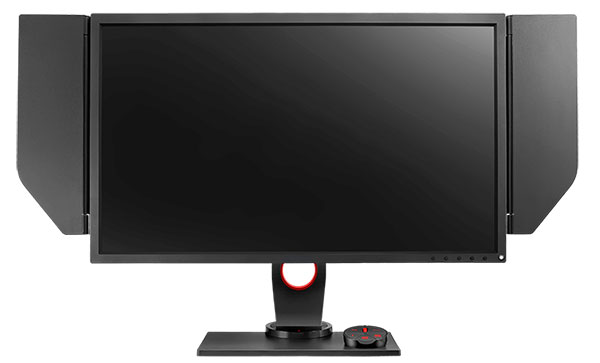 Zowie is a brand best known for its focus on professional gaming hardware, and its mice deliver an elegant functionality that few other brands can match. The new XL2735 gaming monitor and Vital external DAC are no different – they are both utilitarian in design, but are made expressly for professionals to help them gain an edge over the competition.

While the monitor is technically a BenQ, the merger of the two brands means that Zowie has now become the eSports brand for the latter. The 27-inch XL2735 features a 2,560 x 1,440-pixel resolution, a native 144Hz refresh rate, and a speedy 1ms Grey-to-Grey response time, courtesy of its TN panel.

While some of you may be disappointed that it isn’t an IPS panel with better color reproduction and viewing angles, there’s still no beating TN when it comes to responsiveness, and it looks like that’s what Zowie is aiming for.

The headline feature is something called Dynamic Accuracy (DyAc), which helps reduce motion blur and allows objects to remain clear even while panning around. This is most apparent when freezing an image across two monitors – one with DyAc technology, one without – and comparing them. Objects on the DyAc monitor exhibit less ghosting than the one without, which means target outlines, in theory at least, become clearer.

Then there’s the S Switch, an external control panel that lets you access the screen’s on-screen display (OSD) and comes with a wheel for quick profile switching.

Having said that, the most distinctive aspect of the design is probably the two wings at the side of the screen. These help block out anything that might distract you from the game on screen, and are literal blinkers of sorts.

Zowie also introduced the Vital, an external DAC that wants to be an alternative to the soundcards gamers use for surround audio.

Just like how mice with onboard memory let you retain your profiles across different PCs, the Vital allows you to preserve your sound settings on any computer. It relies on an intuitive touch-based interface – set against an edge-to-edge glass surface – with quick access to things like microphone mute and volume controls.

You also don’t have to bother with the hassle of driver installations. Your headphone and microphone plug into one end, while the Vital itself connects to your PC via a USB connection on the other end. There’s also a separate output for speakers, and you can switch between headphones and speakers easily enough.

The Vital can reportedly power headphones up to 250Ω, and the Hi-Fi grade DAC chipset helps provide higher quality audio. Among the tweaks you can make to sound quality are bass, treble, and vocal adjustments, although it doesn’t seem like there is any ability to store multiple sound profiles, a pity seeing as most people probably do more on their PCs than just game.

The XL2735 will retail at S$1,049 at the upcoming SITEX show, following which it will be available at major retailers like Challenger, Newstead, and GamePro. The Vital will cost S$299, and you can buy it starting next week at GamePro, X-treme Solution, and Tec-Drome.

Join HWZ's Telegram channel here and catch all the latest tech news!
Our articles may contain affiliate links. If you buy through these links, we may earn a small commission.
Previous Story
Apple is said to be testing digital glasses, could introduce them in 2018
Next Story
You can now video call friends and family on WhatsApp