The Zenbook Pro 16X OLED, ASUS's answer for creators, has come to Singapore

The Zenbook Pro 16X OLED, ASUS's answer for creators, has come to Singapore If you're in the market for a powerful machine for creative endeavours, you may be interested in this offering from ASUS: the Zenbook Pro 16X OLED (UX7602). Teased last month as part of this year's Zenbook lineup, ASUS calls the Zenbook Pro 16X OLED a 'no-compromise creator laptop', to give you any indication as to who this notebook is targeted towards.

Right off the bat, one of the notable features of the Zenbook Pro 16X OLED is its Active Aerodynamic System Ultra (AAS Ultra), which sees the top half of the keyboard being lifted up at a 7° angle, similar to the lift provided on the second display on ASUS's Zenbook Duos. The company says that the lifted keyboard, raised by 14.5mm, provides as much as 30% more airflow than the previous Zenbook generation.

The AAS Ultra is paired with ASUS's IceCool Pro cooling system. The IceCool Pro system features two fans with 97 curved blades (what ASUS dubs the IceBlade fans), which come along with a 3D vapour cooling chamber and a 5mm heat pipe connected to the CPU and GPU. All told, combined with the AAS Ultra, ASUS says that the CPU and GPU can run up to a combined TDP of 140W in Performance Mode, with the fans running quieter than 40dB in Standard Mode. 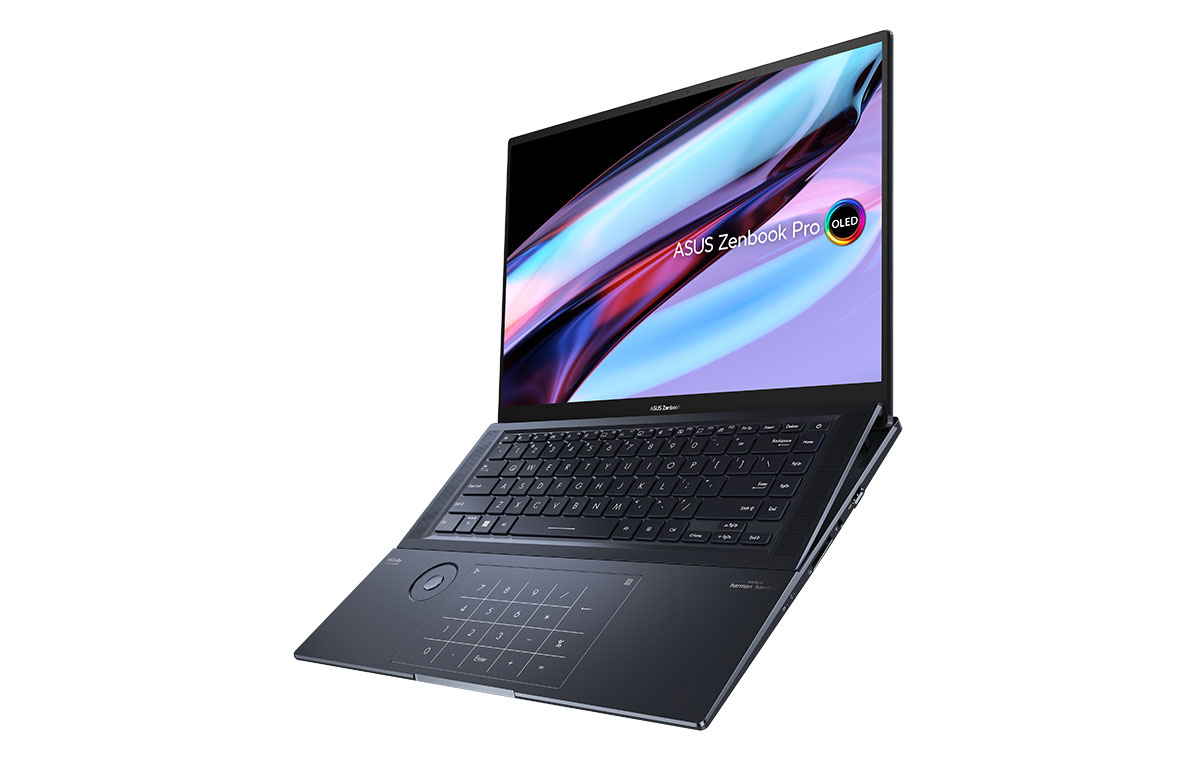 Another thing you may notice is a dial next to the trackpad. ASUS calls this the ASUS Dial, which allows you to control parameters such as brush size, saturation and layer opacity more easily. ASUS says it works with a suite of Adobe apps like Photoshop, Premiere Pro, Illustrator and After Effects. The ASUS Dial is also compatible with ASUS's ProArt Creator Hub for customisation of its functions.

As for the internals, the UX7602 build of the Zenbook Pro comes with a 12th Gen Intel Core i9-12900H, paired with an NVIDIA GeForce RTX 3060 GPU. Both are quite beefy components in a mobile machine, which is why the Zenbook Pro is also equipped with a 96Wh battery. Hopefully, a battery of that size combined with the AAS Ultra and IceCool Pro cooling systems should help increase battery life considering the powerful and power-hungry internals.

Finally, one of the star features of the notebook is its 16-inch OLED display. Though unfortunately stuck at 60Hz, the 16:10 screen makes up for it not just through the contrast that OLED displays can provide, but also as it supports touch and stylus input (the ASUS Pen 2.0 to be specific), and also through its high resolution of 3800 x 2400, along with a peak brightness of 550 nits.

If you want to know more, here are the full key specs of the Zenbook Pro 16X OLED:

The ASUS Zenbook Pro 16X OLED will be available starting today (17th June) at the ASUS Exclusive Store, ASUS Online Store as well as authorised retailers. As you may have expected, it won't come cheap; ASUS is asking for a price of S$4,999 for the notebook.

Join HWZ's Telegram channel here and catch all the latest tech news!
Our articles may contain affiliate links. If you buy through these links, we may earn a small commission.
Previous Story
The Jabra Talk 65 makes sure you can be heard no matter where you are
Next Story
WhatsApp improves voice group calls with new features