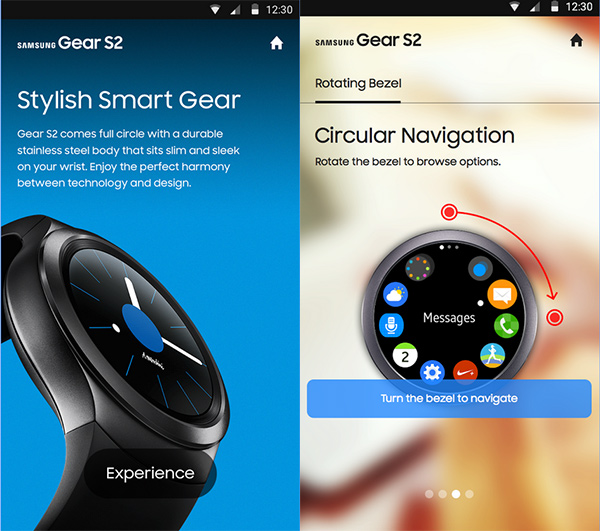 With a slew of smartwatches to its name, Samsung finally got it right with the Gear S2. First unveiled in September, the Gear S2 joined a crowded wearables market that included heavyweights like the Apple Watch and Pebble Time Steel. But if you’re caught up in indecision as to whether to buy the Gear S2, you can now give the watch a virtual spin with the new Gear S2 Experience app for Android.

For all the Gear S2’s merits, we would hardly blame you if you were having a hard time deciding if it was the smartwatch for you. Because smartwatches are intended to be worn daily, looks and how well they jive with your sartorial preferences play an especially important role in smartwatch buying decisions.

The Experience app lets you play around with the Gear S2’s interface and rotating bezel, and experience its various apps and health-tracking features. In addition, you can customize the virtual watch to experiment with different watch faces, and even launch the camera for an augmented reality view of what the Gear S2 looks like on your wrist. You can then share the snapshot for a second opinion.

It sure doesn’t beat actually trying on the watch, but it might be a close second.

Join HWZ's Telegram channel here and catch all the latest tech news!
Our articles may contain affiliate links. If you buy through these links, we may earn a small commission.
Previous Story
Microsoft and PC partners quietly revive Mac vs PC ads... without mentioning Macs
Next Story
A*STAR researchers teach robot to navigate with simulated brain cells