You can now stream Xbox One games to Windows 10 PCs

You can now stream Xbox One games to Windows 10 PCs 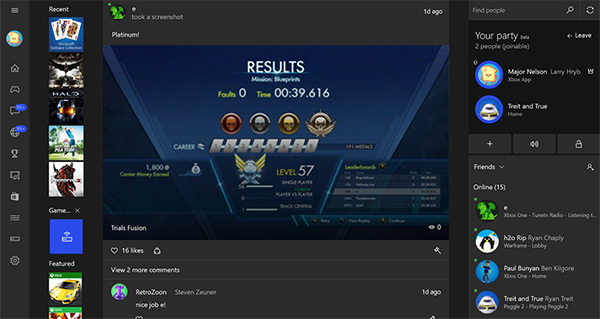 It’s systems go for many things at Microsoft now as we approach July 29, the launch date for Windows 10 for PCs and tablets. Last week, we saw the final build seeded to Insiders; Office Mobile universal apps becoming generally available on Windows Store; and pre-orders for Windows 10 on USB flash drives opening up on Amazon.

Now, another feature that has shed its preview status is streaming of games from an Xbox One to a Windows 10 PC or tablet. In short, you can now play your Xbox One games on your Windows 10 devices when you’re not in front of your console.

Here’s how you enable game streaming from Xbox One, courtesy of Xbox Wire:

To get started, on your Xbox One console, go to Settings > Preferences > Allow game streaming to other devices and then install the latest version of the Xbox app on your Windows 10 PC or tablet.

The July release of the Xbox app for Windows 10 also includes a ton of new features for you to access your gaming world and connect with your friends and the Xbox Live community. Click on the source link below to find out more.

Join HWZ's Telegram channel here and catch all the latest tech news!
Our articles may contain affiliate links. If you buy through these links, we may earn a small commission.
Previous Story
LG launches S$328 Magna LTE smartphone
Next Story
The new Panasonic GX8 camera has the highest megapixel count for Micro Four Thirds