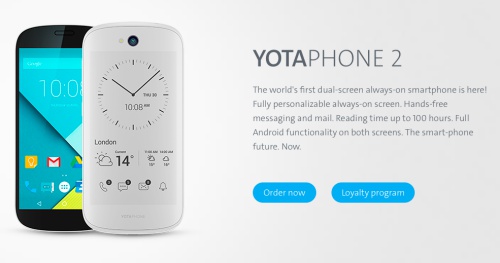 The Android 4.4 KitKat-powered YotaPhone 2 should be getting the over-the-air (OTA) update to Android 5.0 soon, which will also include changes to the custom software and Yota apps. For example, the rear E-Ink display receives several new social widgets (Facebook, Instagram, Twitter) that pull content regularly, actionable shortcuts, YotaRemote for controlling a smart TV over Wi-Fi, new Gmail widget and YotaSports which will deliver live match scores and other info from EuroSport.

Yota also released a white model of the YotaPhone 2 and it really looks stunning. Aside from the color difference, the white model have redesigned buttons which are made of brushed metal and there is a white theme for the rear display.

Consumers in the U.K and other parts of Europe can now get the YotaPhone 2 (black and white) at reduced prices of £440 (down from £555) and €599 (down from €699) respectively. If you want to find out more about the YotaPhone 2, do check out our review of the phone.

Join HWZ's Telegram channel here and catch all the latest tech news!
Our articles may contain affiliate links. If you buy through these links, we may earn a small commission.
Previous Story
Nubia Z9 launches in Beijing with 5.2-inch "borderless" Full-HD display
Next Story
LG G4 registration of interest premium gifts announced