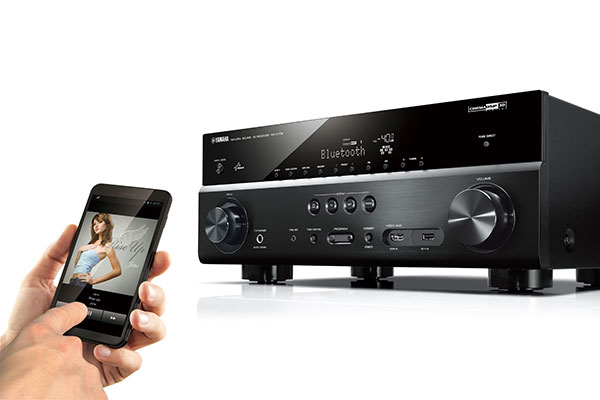 If you’re looking for an affordable but yet feature packed AV receiver from Yamaha, you can’t escape the 2014 RX-V77 series, which saw new features like Yamaha’s Virtual Cinema Front and Extra Bass technologies. In 2015, we’ve the new RX-V79 series, where all models are now wireless enabled, support 4K UHD passthrough via HDMI 2.0, and HDCP 2.2 compatibility.

First up, there’s the 5.1-channel RX-V379 with a 70W (at 6 ohms, 0.09% THD, 2ch driven) rated output power. It has four HDMI inputs, supports 4K UHD passthrough (up to 60p 4:2:0) with HDCP 2.2, Bluetooth streaming, has 17 DSP presets, and supports the company’s AV Setup Guide app for setup assistance, as well as the Yamaha Parametric Acoustic Optimizer (YPAO) for automatic speaker setup. Priced at US$300, the RX-V379 looks like a great AV receiver for entry-level users.

Moving up a notch is the US$450 RX-V479, which is also a 5.1-channel AVR but with 80W rated output power (6 ohms, 0.09% THD, 2ch driven). It has everything the RX-V379 has, but with more HDMI inputs (six), and support for DLNA 1.5. It also has a USB port on the front panel for connecting to an iPod or iPhone, something that the RX-V379 lacks. And in addition to Bluetooth, it supports AirPlay, Wi-Fi and Wireless Direct, and music streaming services like Spotify Connect and Pandora. Equipped with a Burr-Brown DAC, it supports high-res file formats (e.g. DSD, WAV, FLAC) at up to 24-bit/192kHz resolution.

If you’re looking to do a 7.2-channel surround setup, you’ve several options in the form of RX-V579, RX-V679, and RX-V779. For the most part, the US$550 RX-V579 is an enhanced RX-V479. While both models have Cinema DSP 3D, only the latter features a Virtual Surround Back Speaker function. In short, this allows you to experience natural, lifelike sound from behind you without physical speakers being installed in the surround back area. The RX-V579 also supports Zone B speaker output, which means it can send 2-channel stereo audio to a second room while the main zone plays a 5-channel output.

The US$650 RX-V679 offers even more power (90W per channel at 6 ohms, 0.06% THD, 2ch driven) and features, including support for the Rhapsody music streaming service and SiriusXM Internet radio, 4K UHD passthrough (up to 60p 4:4:4) and upscaling, YPAO Reflected Sound Control for automatic speaker setup, and YPAO Volume for ensuring natural sounds at low volume levels. And with a Zone 2 audio mode, you can play a different source in stereo in another room. And of the six HDMI inputs, three support HDCP.

Last but not least, there’s the US$850 RX-V779, which has a 95W per channel rated output power (8 ohms, 0.06% THD, 2ch driven). Key differences versus the RX-V679 include an additional HDCP output, YPAO RSC with multi-point measurement, and a phono input for vinyl playback. It’s also the only one to carry an aluminum front panel.

Of course, certain high-end features aren't found on the RX-V79 series, such as support for Dolby Atmos or DTS:X. For Dolby Atmos, you can check out Yamaha's Aventage series of AVRs. The company is also expected to come out with DTS:X-capable AVRs some time this year.

Join HWZ's Telegram channel here and catch all the latest tech news!
Our articles may contain affiliate links. If you buy through these links, we may earn a small commission.
Previous Story
Google remains "pretty committed" to Android One despite slow start in India
Next Story
Android 5.0 Lollipop upgrade now available for LG G Pro 2 and G3 Beat