This year’s International Sound & Sight Exhibition (ISSE) was held over a weekend at the Parkroyal on Kitchener Road, and everything from home theater receivers to network players, portable media players, headphones, desktop speakers and tube amplifiers were on display. If you missed attending it or didn't have time to check out all of the available options, do check out our 6 recommendations for really good audio experience that also exude design excellence.

Meanwhile in this update, we focus on 3 key new products from Yamaha that cater to mainstream audio enthusiasts and audiophiles who don't have to rob a bank for great music and modern entertainment options.

Dolby Atmos from a sound bar! Yamaha invited us to a demonstration of their latest MusicCast devices at their booth, and first up was the YSP-5600BL, a MusicCast-enabled sound bar that’s capable of delivering a stunning 128W of total output. It features a total of 46 speaker drivers and is one of the first to offer 7.1.2 Dolby Atmos surround imaging.

Yes, the same Dolby Atmos surround imaging in cinemas that gives you not only sound from in front, around, and behind you, but also from above. The YSP-5600BL does this with the use of six array speakers on either end of the unit that are mounted on an angled baffle with vertical sound beam control. This allows the sound bar to bounce sound off the ceilings recreating audio that feels like it was coming from physical ceiling-mounted speakers. 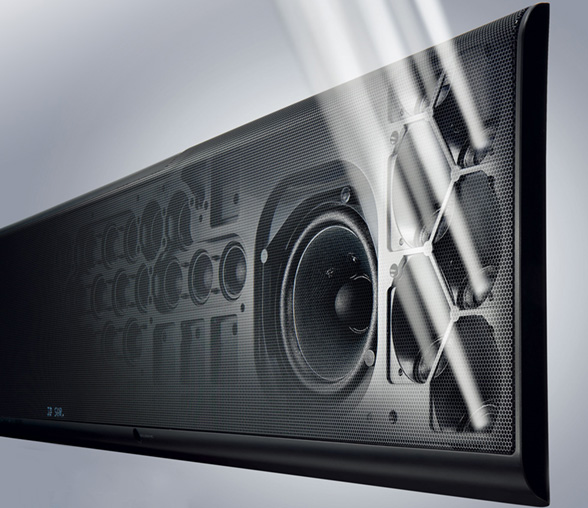 A demonstration of the speakers was held at their booth, with fight scenes from Transformers: Age of Extinction played while the Yamaha staff demonstrated how the height channels could be adjusted to match the listening position, and we must say the end result was really impressive, in that you could feel a real sense of directional audio coming from all directions. Vocals and bass effects (like explosions) were projected well forward, and you really could get a sense of being enveloped in sound. Of course, it's no match for a proper "proper" 7.1.2-channel speaker set-up to truely recretate the Dolby Atmos effect from movies supporting this sound format, such as our experience from Yamaha's showroom last year when Dolby Atmos was just about being enabled for the home and was a new concept.

Having said that, for a sound bar, the YSP-5600BL performs reasonably well for its class. For smaller living rooms like what we have in Singapore, this sound bar certainly does represent a more practical approach to getting Dolby Atmos sound in the home. Due to the sound bar's speaker array stacked vertically, it's not a small sound bar by any means and it would require some rethought on how you would want to place it with your TV screen on your TV console. If you are wall mounting both the TV and sound bar, the placement concern is a non-issue. As with most other sound bars, you've minimal management, so that saves you from the mess and hassles of managing multiple speakers in a traditional layout.

The list price for the YSP-5600BL is S$2,749 and this will be Yamaha's top sound bar offering moving forward. It will be available in major electronics outlets soon.

Take note that the price of the sound bar does not include a subwoofer and we do highly recommend in investing a a good one to pair with this Dolby Atmos sound bar for the best experience. Speaking of which, our sound bar audition shared above was with an eqaully expensive Yamaha NS-SW901 subwoofer that costs up to S$2,599 depending on the choice of finish chosen. So depending on your final subwoofer pairing, you could be looking at an investment of about S$5k (unless you've already got a subwoofer that's still in great working condition). Moving next door, we saw Yamaha’s YSP-1600 MusicCast, a slim wireless-enabled sound bar that was paired up with a projector for an immersive viewing experience without needing the space of a large TV. The YSP-1600 offers HDMI with 4K Ultra HD pass-through and HDCP 2.2, so it can power your movies and videos while also being used for wireless music streaming from services like Spotify and Pandora. 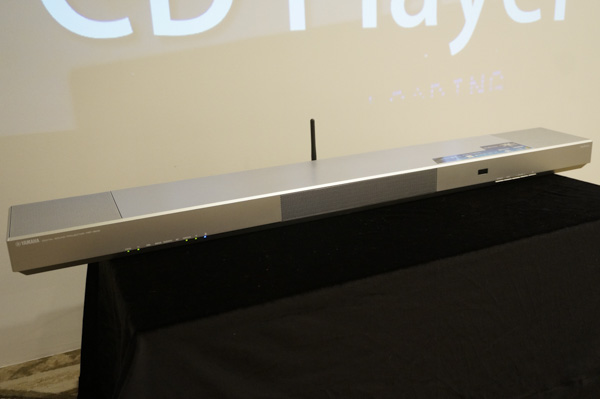 The YSP-1600 is also able to deliver true 5.1-channel surround sound by reflecting sound beams off the walls of your room to create an immersive experience. There are also five DSP presets that you can select to best match your content: Movie, Music, Sports, Game and TV Program so that’s great versatility from a single sound bar. Finally, we were treated to an interesting sight: Yamaha’s new NX-N500 bookshelf speakers hooked up to an A-U671SL desktop amp with DAC function which was in turn communicating with a RN602SL network receiver with integrated phono that was powering a turntable.

It’s a bit of a roundabout way, but a necessary one as the NX-N500 bookshelf speakers only have digital inputs. What it does serve to highlight is how all of Yamaha’s products can talk to each other wirelessly thanks to MusicCast support. The NX-N500 speakers themselves seemed to have a nice, warm sound with a good mid-range, lending well to vocals. You won’t need much to power them either, as they use a discreet built-in bi-amplification system with a 45W amplifier to the woofer and a 25W amplifier to the tweeter. If you want, you can just have the speakers on a standalone basis as they have an integrated USB DAC which supports up to DSD 5.6MHz Native Resolution and PCM 384kHz / 32-bit with asynchronous transmission. The new NX-N500 speakers will retail soon for S$1,149. For the other components used in this demo such as the A-U67I SL desktop amp and the RN602SL network receiver, they are already available for S$729 and S$899 respectively.

Join HWZ's Telegram channel here and catch all the latest tech news!
Our articles may contain affiliate links. If you buy through these links, we may earn a small commission.
Previous Story
Taylor Swift's 1989 World Tour LIVE movie will be an Apple Music exclusive
Next Story
Turn any USB source into a wireless charging station with the Gecko *updated with extra perk*