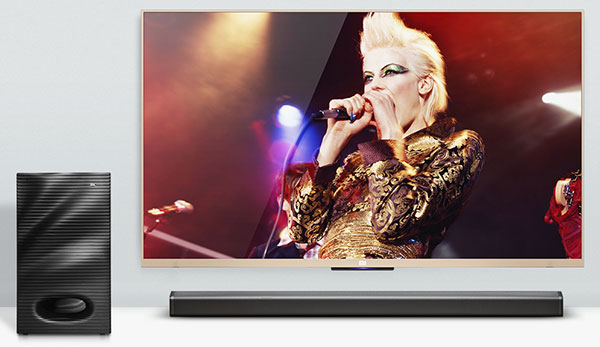 A 49-inch, 4K TV set (supports passive 3D too, using an LG/CSOT-made panel), the MIUI TV-powered (based on Android, obviously) Mi TV 2 sports a MediaTek MStar 6A918 SoC (quad-core Cortex-A9 CPU running at 1.45GHz, Mali-450 MP4 GPU), 2GB RAM, and 8GB internal eMMC storage (expandable via microSD). It also supports dual-band 802.11ac Wi-Fi, USB 3.0, and Bluetooth 4.0. Since the remote is now controlled over Bluetooth LE (instead of IR), line of sight isn’t required. Furthermore, if the remote is misplaced, one can just walk up to the TV, press a button, and the remote will beep to announce its location.

The Mi TV 2 is quite a looker too: it comes in different colors (e.g. red, pink, blue, green, purple, gold), has a 6.2mm aluminum bezel, and a chassis measuring just 15.5mm thick. While it comes with built-in speakers, the Mi TV 2 package also includes a separate 8-speaker (6 full-range units, 2 tweeters) soundbar and a 100W subwoofer with an 8-inch driver. Both the soundbar and subwoofer support Bluetooth as well. According to Xiaomi, the Mi TV 2 is the first TV in the world to support the Dolby Audio X2 virtual surround sound tech.

The Mi TV 2 package (including the soundbar and subwoofer) is priced at 3,999 Yuan (slightly over S$800 based on current exchange rate) and will be sold in China starting from May 27. Xiaomi has told us that it intends to eventually bring the Mi TV 2 to Singapore, but this may take a while due to the lack of a content partner at the moment.

Join HWZ's Telegram channel here and catch all the latest tech news!
Our articles may contain affiliate links. If you buy through these links, we may earn a small commission.
Previous Story
Sony Packs Wider, Brighter Lens into the Cyber-shot RX100 III
Next Story
Pinterest Raises US$200 Million in Latest Round of Funding