Note: This article was first published on 27th Match 2019. 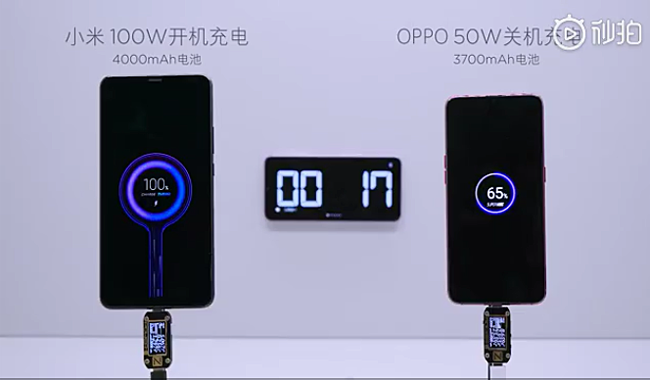 General Manager of Redmi, Lu Weibing shared a video on his Weibo account that purportedly demonstrates the fast charging capabilities of Xiaomi’s 100W Super Charge Turbo. In the video, there’s a device, with a 4,000 mAh battery, which supports Super Charge Turbo. It’s compared with an Oppo phone that is powered by 3,700mAh battery and SuperVOOC technology.

Oppo’s SuperVOOC technology is currently the fastest proprietary fast charging technology that is designed to deliver maximum charging power, up to 50W. However, it was unable to keep up with Xiaomi’s 100W Super Charge Turbo that fully charged the 4,000mAh battery in 17 minutes.

The exact details of this new fast charging technology from Xiaomi remains sketchy and consumers will have to wait and see if the technology will make its way to future smartphones from Xiaomi or Redmi.

Join HWZ's Telegram channel here and catch all the latest tech news!
Our articles may contain affiliate links. If you buy through these links, we may earn a small commission.
Previous Story
Microsoft quietly updates its 13.5-inch Surface Book 2 with Intel's latest Core i5 chip
Next Story
Xiaomi to launch foldable phone in Q2, rumored to cost half of the Galaxy Fold