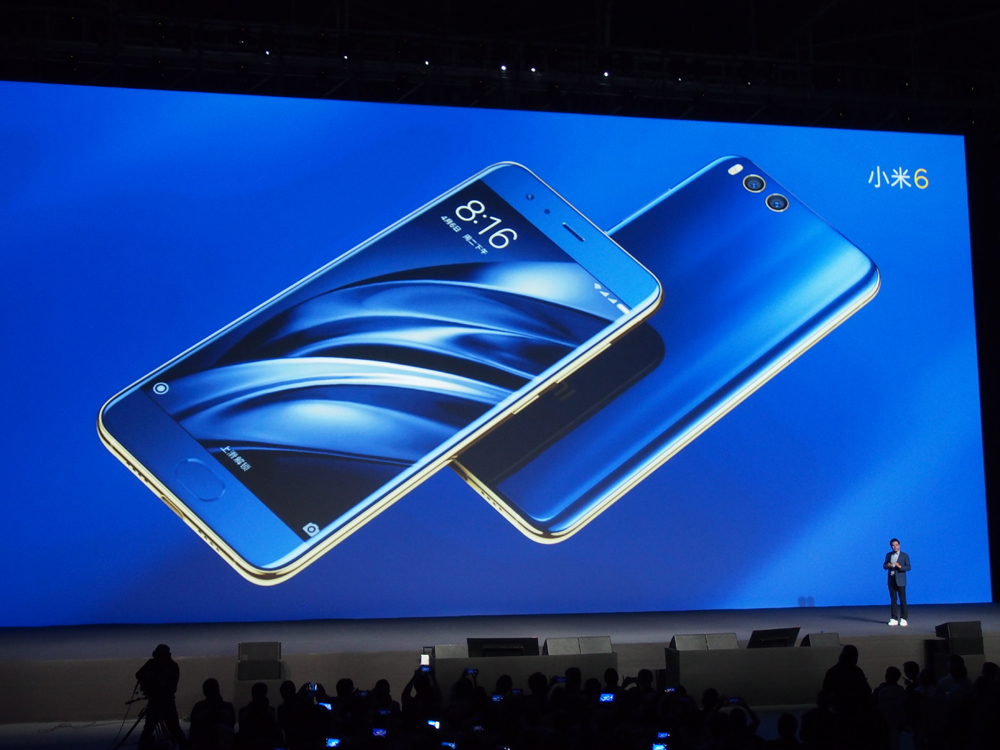 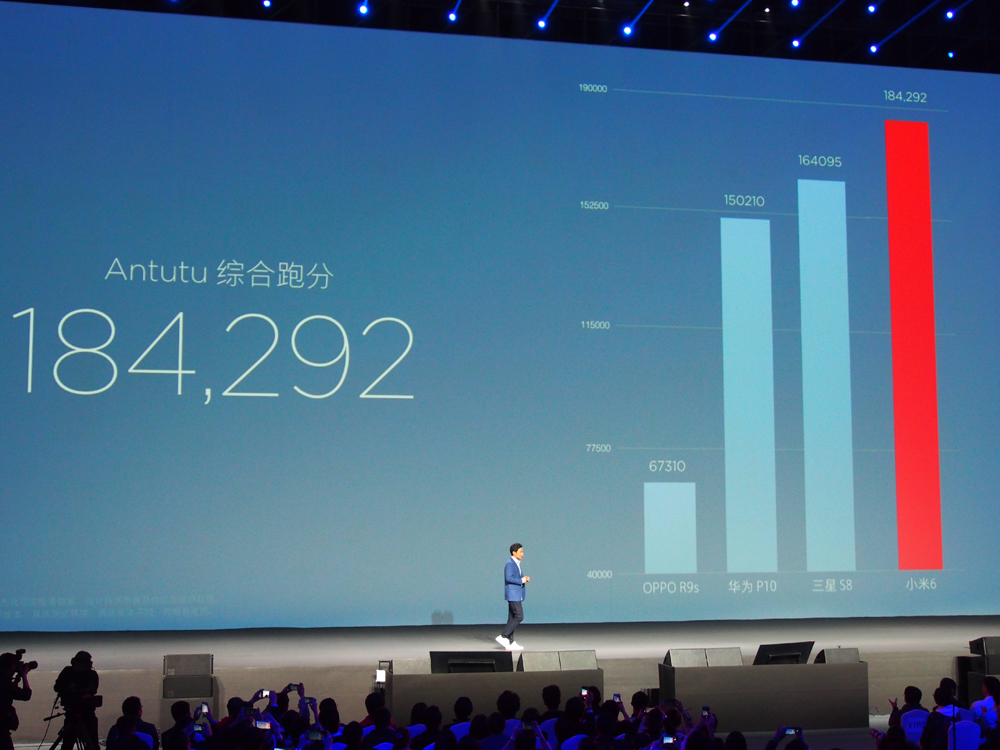 The biggest feature on the Xiaomi Mi 6 is the use of a Qualcomm Snapdragon 835 SoC. Presumably, there's been a shortage of Snapdragon 835 chips and the only phones to use it are none other than the Samsung Galaxy S8 (outside of Singapore) and the Sony Xperia XZ Premium with 4K HDR display. 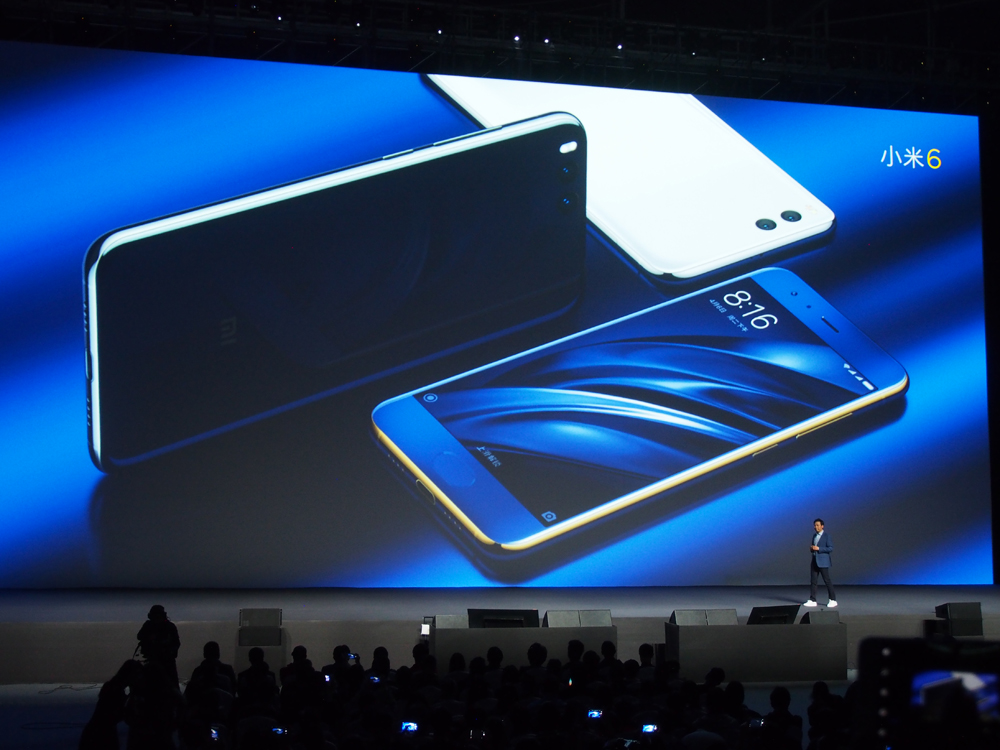 Having the Mi 6 sport the latest chipset could be a game-changer since existing options for Snapdragon 835-powered phones are limited and pricey. This is the first Chinese smartphone to use the Qualcomm Snapdragon 835 SoC. You can read more about the chipset here. 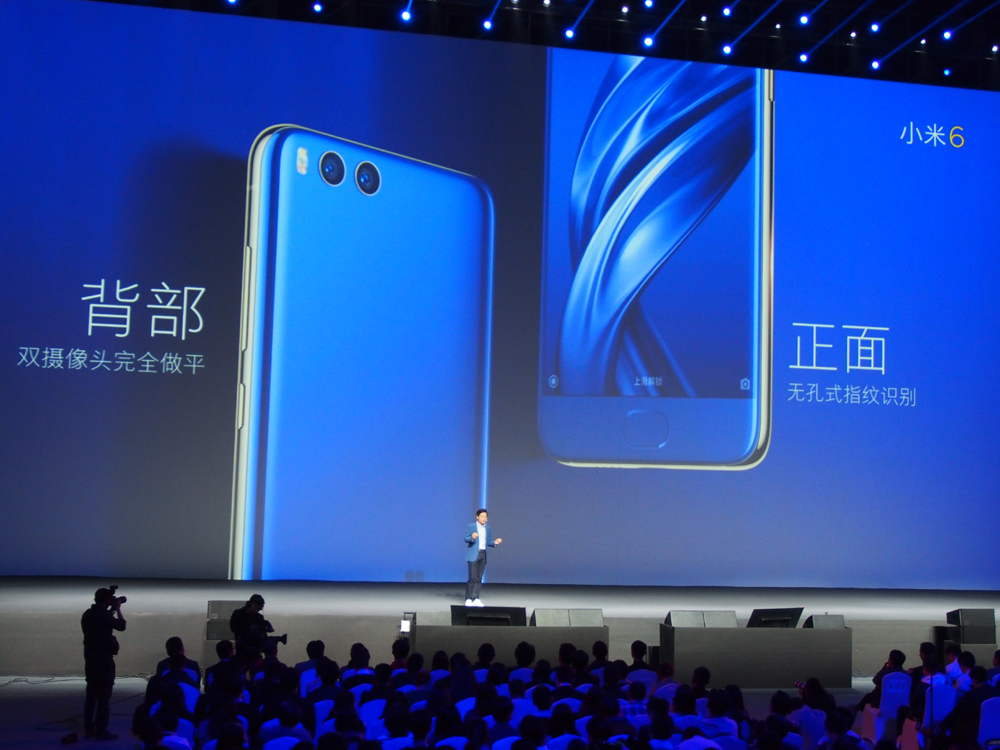 By default, the phone ships with Android 7.0 OS (Nougat). It features 6GB LPDDR4x RAM. The sensor is no longer a physical button, but a tactile interface that's similar to the sensor on the Huawei P10. The top and the bottom of the device features its dual stereo speaker configuration, and it offers NFC connectivity. 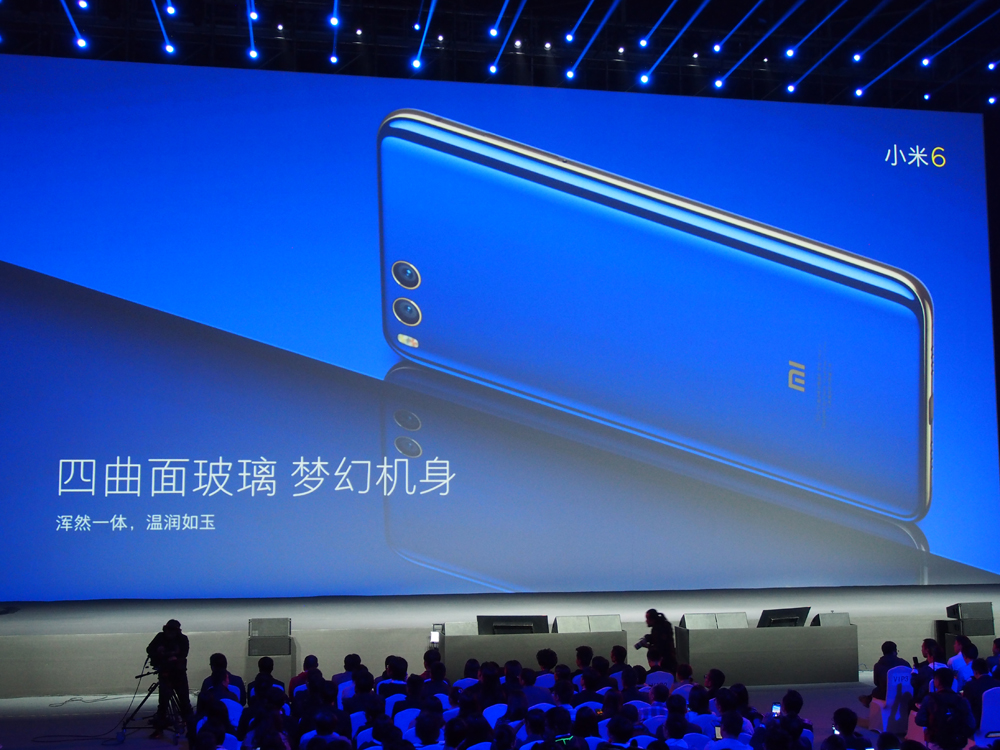 Xiaomi claims that its biggest design advancement is the "four-sided curved glass" appearance - specifically, the glass rear curves down on both sides of a corner, as opposed to having the glass curve towards the rim on a single side. Another design highlight is the use of a stainless steel rear, which Xiaomi managed to keep the cost under control through the help of their manufacturing partners. The body is also splash-resistant, right down to its sealed SIM card slot. 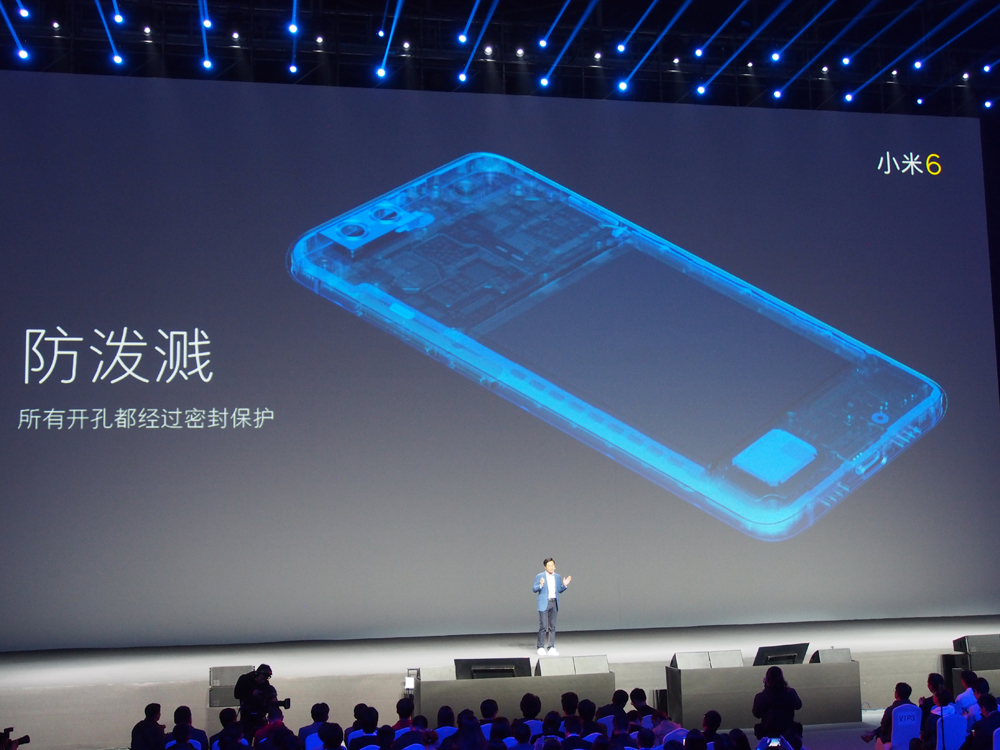 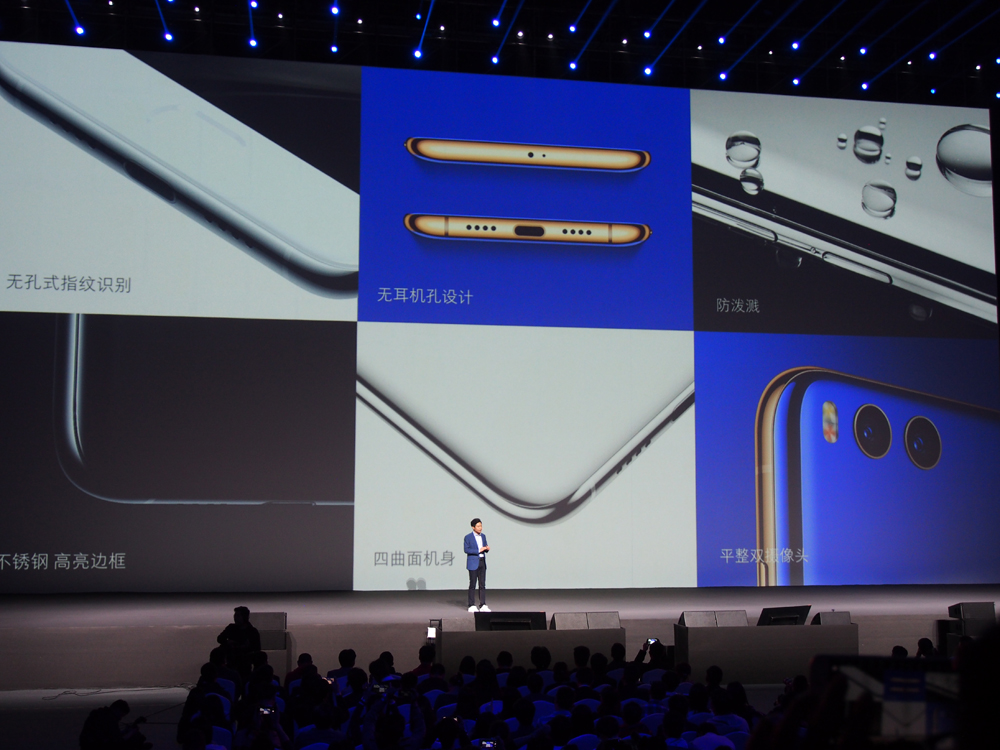 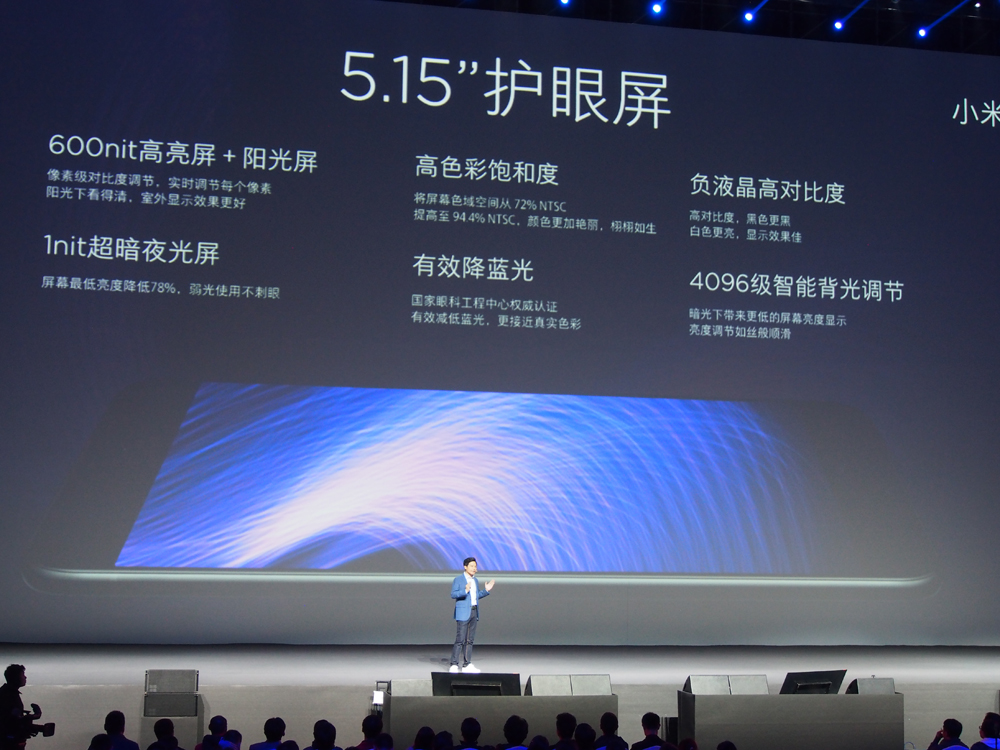 The Xiaomi Mi 6 sports a 5.15-inch Full HD display (1,920 x 1,080 pixels resolution) with a maximum brightness of 600-nits and Xiaomi Sunlight Brightness hardware. The display also comes with an "Eyecare" option, where they minimize the blue rays emitted by the smartphone's screen. 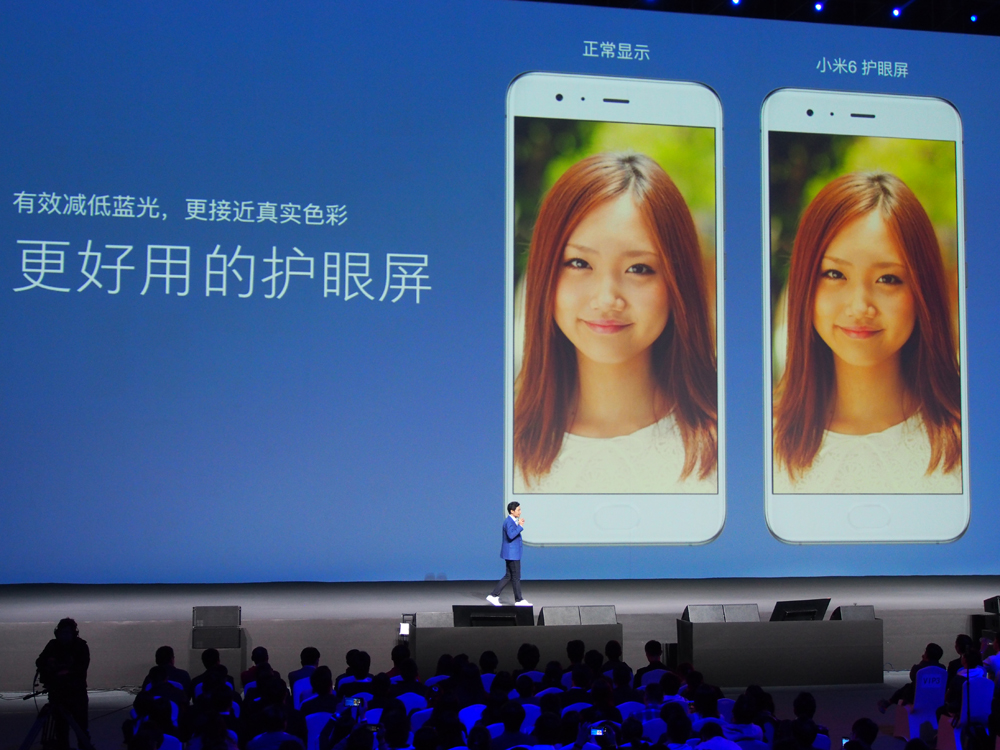 Eyecare mode ensures that images still look accurate enough despite the shift in color temperature. The phone is also capable of 1-nit brightness with 4,096 individual gray levels for contrast; this enables more comfortable nighttime use as well. 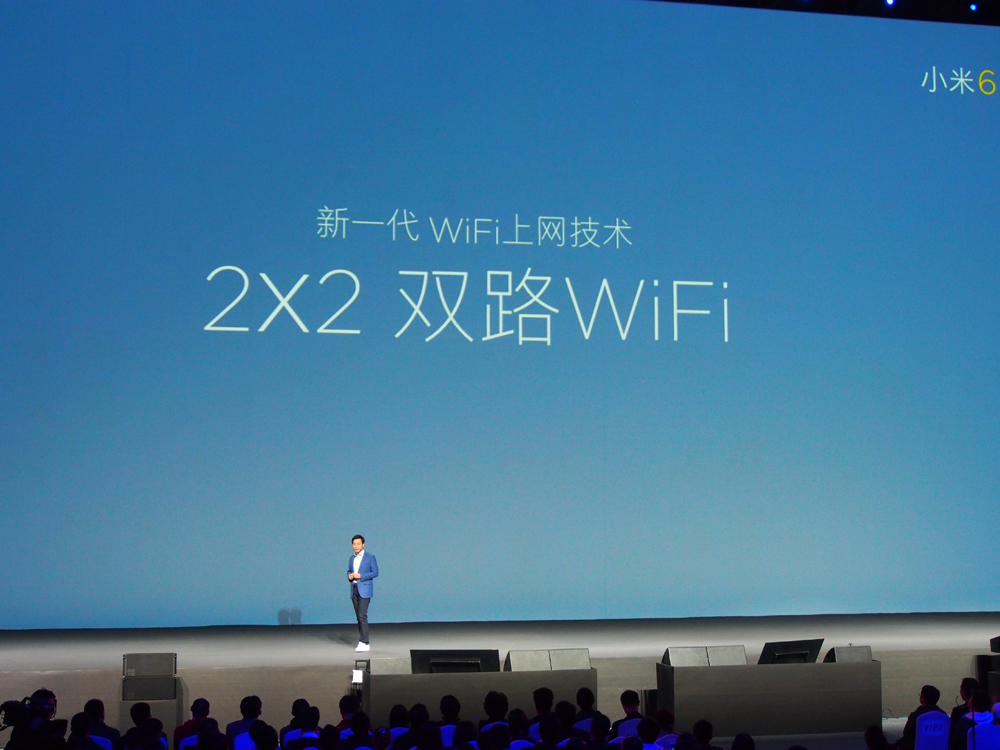 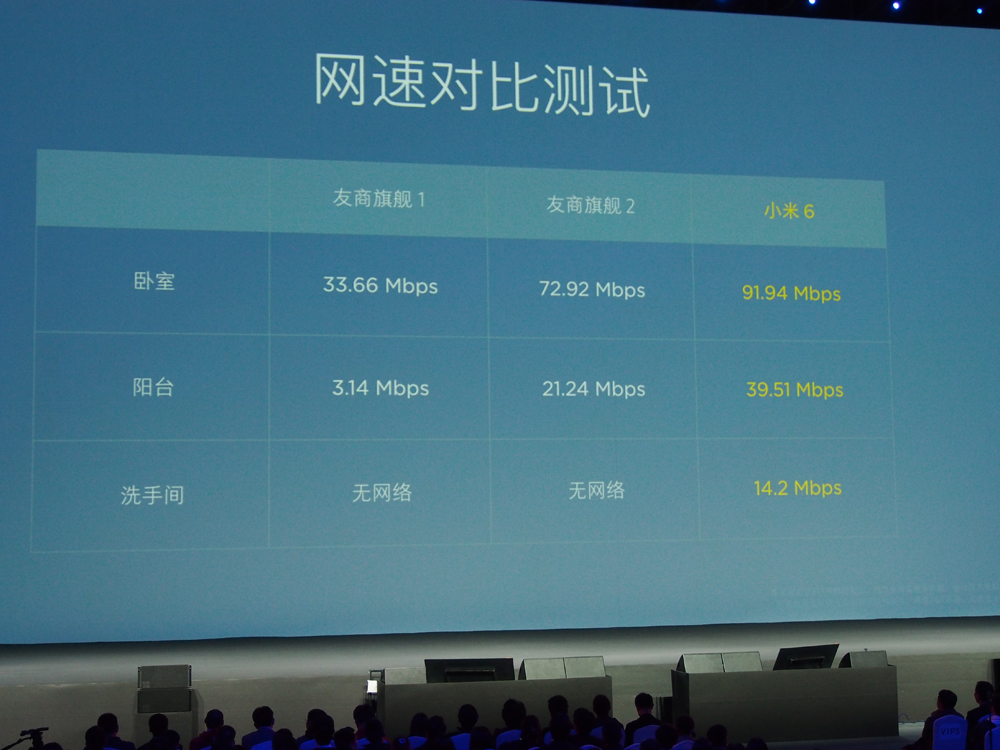 Mi 6 uses a 2x2 antenna for Wi-Fi connectivity, which was made to circumvent poor connectivity in walled premises (such as homes and offices). In the example above, the Mi 6 manages to maintain connectivity in a washroom, where its competitors were unable to. 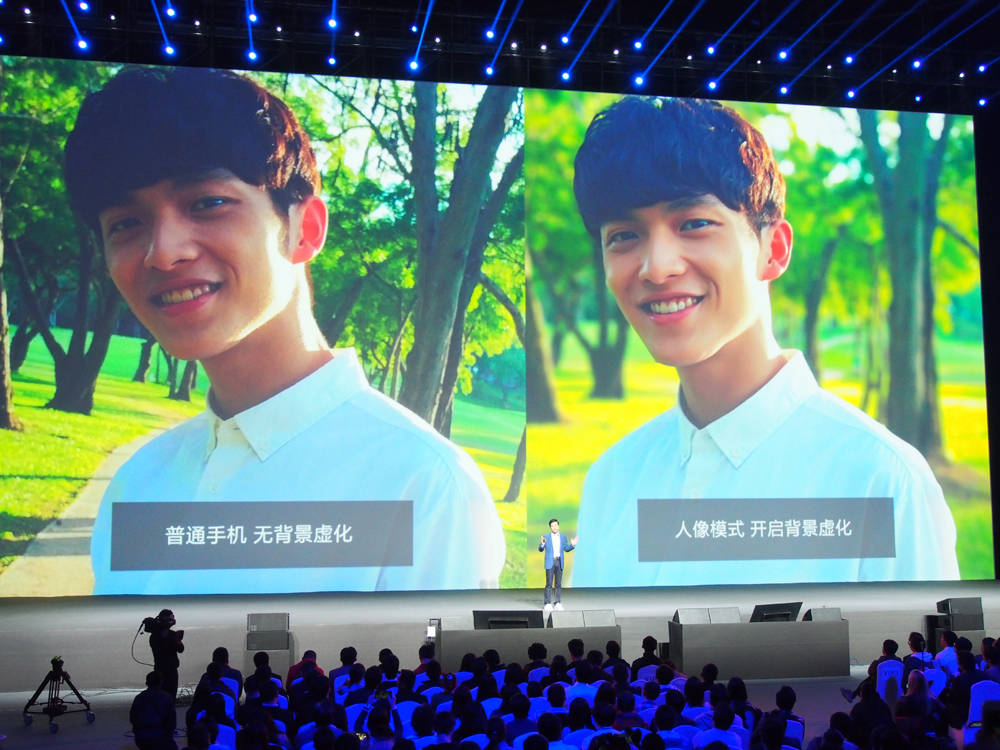 The Mi 6 has a dual rear camera setup, with one telephoto lens and one wide-angle lens. The combination of both lenses can register different depths-of-field, resulting in visually appealing portrait shots with bokeh effect. The rear cameras also now come with Beautify 3.0, and 2x optical zoom support. 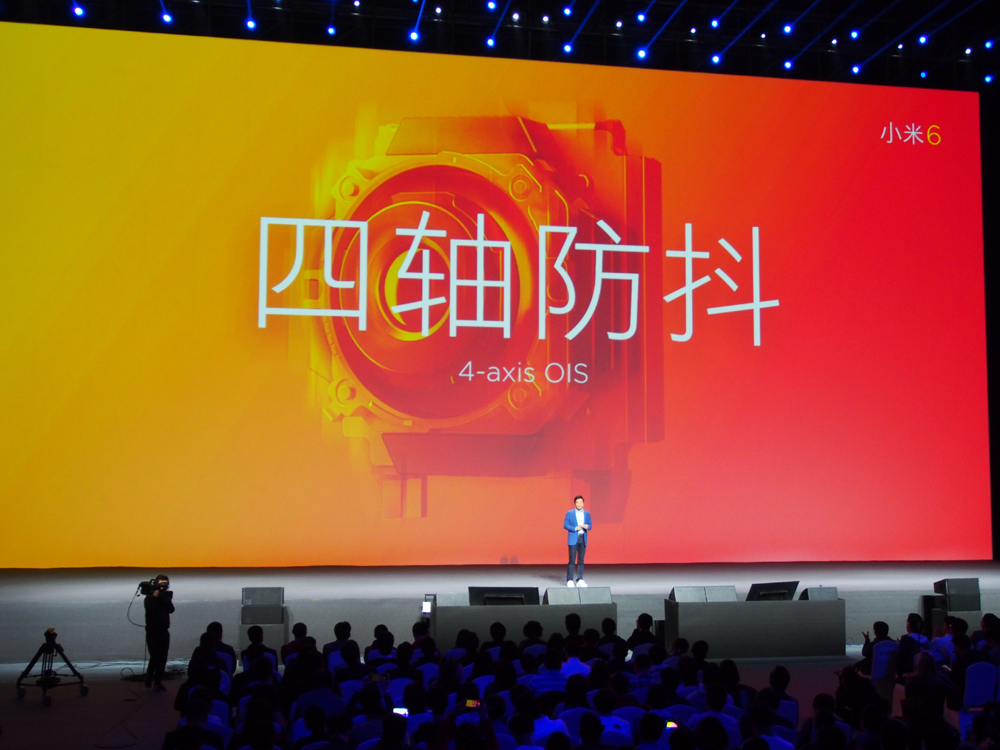 Both lenses are at 12-megapixels resolution, and they are both supported by 4-axis OIS (optical image stabilization) - the OIS compensates for pitch and yaw, as well as up-down movement. 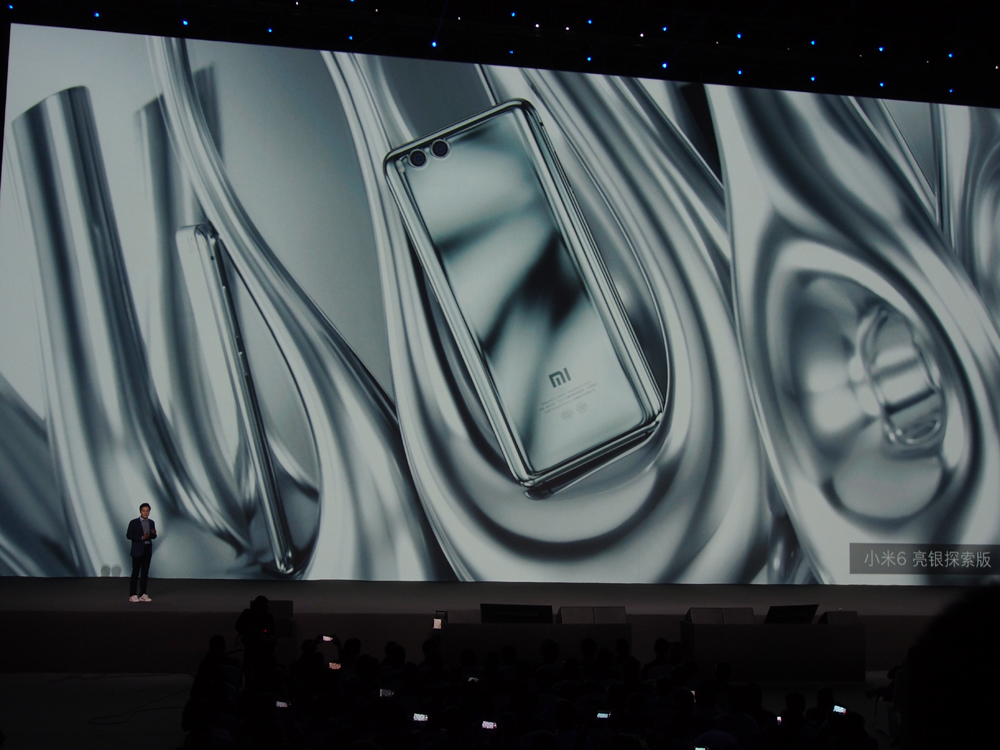 The special edition Xiaomi Mi 6 features a liquid metal appearance that's designed to reflect all light that touches the surface of the device. Xiaomi claims that this aesthetic is their main driver for working on the four-sided curved display. The difficulty of manufacturing this mirror finish resulted in limited pieces available for sale, but the company will continue to manufacture more units where possible. Availability has yet to be announced. 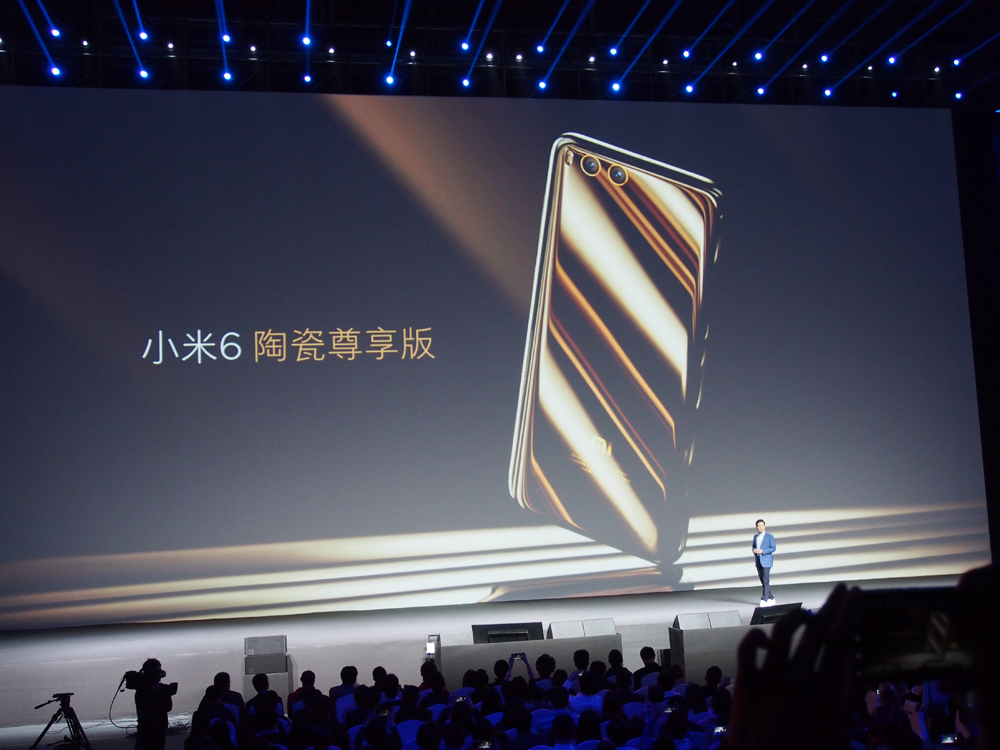 Like the standard Mi 6, the Ceramic Edition also features the four-sided curved glass - this time round, the dual rear camera rims uses 18-karat gold. It comes with 6GB RAM with 128GB storage. 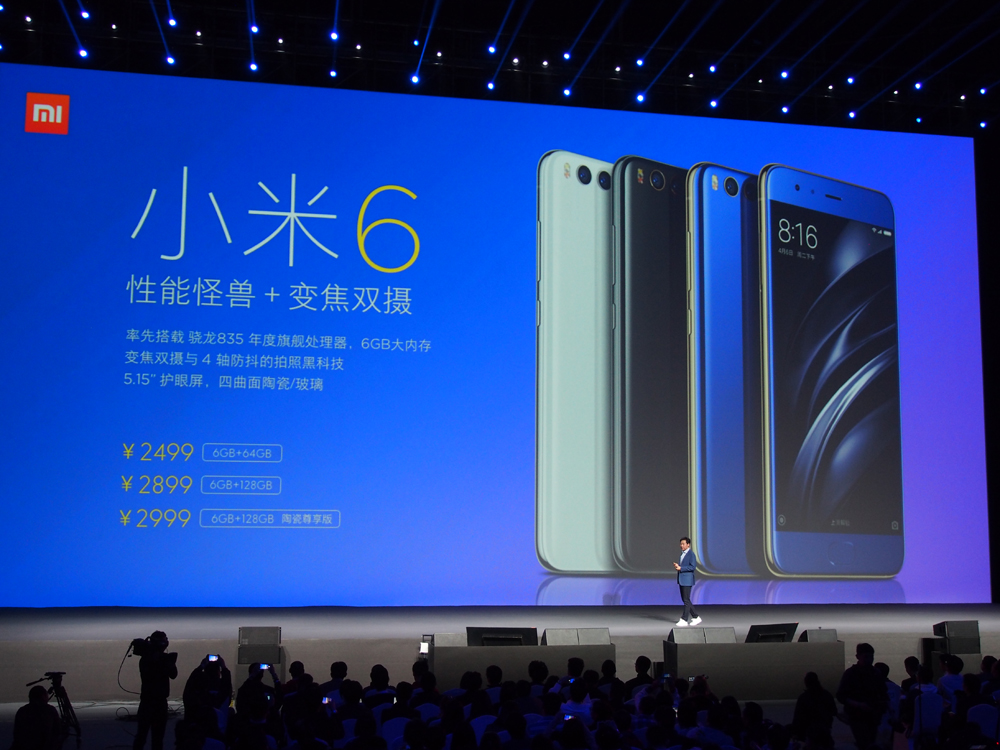 The Xiaomi Mi 6 will be available in China starting on 28th April 2017. Retail prices are as follows:

Local availability and pricing will be announced at a later date.

Join HWZ's Telegram channel here and catch all the latest tech news!
Our articles may contain affiliate links. If you buy through these links, we may earn a small commission.
Previous Story
A new feature coming to Windows 10 could throttle background apps to save battery
Next Story
NASA’s entire photo archive is now at your fingertips