Xiaomi holding an event on 16 July, could be the launch of the Mi 5 and Mi 5 Plus

Xiaomi holding an event on 16 July, could be the launch of the Mi 5 and Mi 5 Plus

Xiaomi is holding an event on 16th July where it is expected to unveil a new, ultra-slim device.

According to PhoneArena, the invites have been sent out with a teaser image of what seems to be the side profile of a phone. It is likely to be the launch event for the much rumored Xiaomi Mi 5 and Mi 5 Plus.

It is also possible that Xiaomi will be launching the successor to the Redmi Note as a leaked roadmap states that two models - the Note 2 and Note 2 Pro - are scheduled to be launched in the same time frame. Based on the listing from Chinese agency TENNA, the Redmi Note 2 comes with a 5.5-inch 720p display, 8GB internal storage space with microSD support, and a 13-megapixel rear camera.

Other possible new products which may be announced at the event include a new Redmi phone with metallic design and Full-HD display, and the Mi Band 1S with a heart rate monitor. 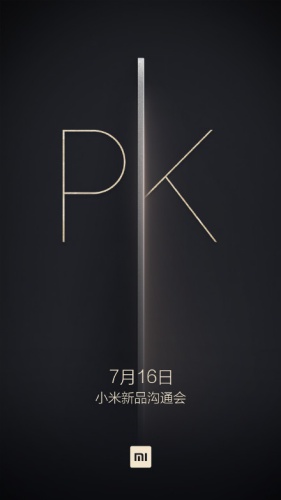 Join HWZ's Telegram channel here and catch all the latest tech news!
Our articles may contain affiliate links. If you buy through these links, we may earn a small commission.
Previous Story
BlackBerry and Google working on an Android enterprise mobility partnership
Next Story
Watchmaker Original Grain thinks you’d want to wear its Barrel watch and the Apple Watch on the same wrist