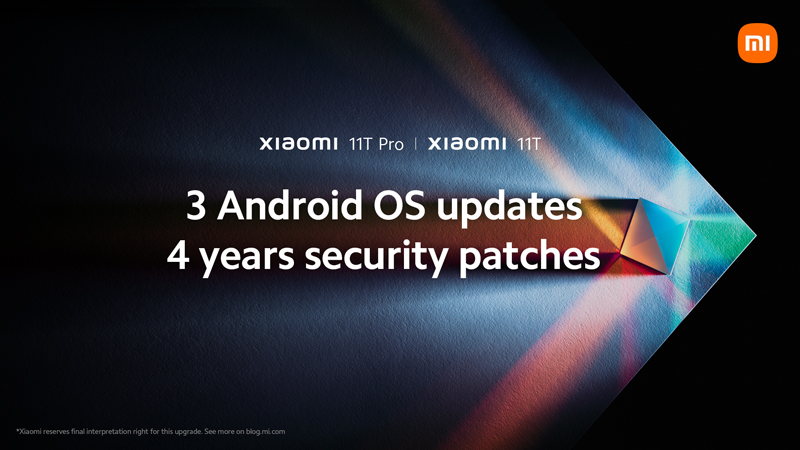 Following an unofficial, leaked teaser video of the Xiaomi 11T series phones’ announcement date, Xiaomi oddly put out an official press statement on these devices' update promises. Talking about putting the cart before a horse.

However, Xiaomi also added caveats to its software support promises by saying that update availability is entirely dependent on external factors - such as the complexity of each update, the local laws governing firmware updates, and other factors.

Xiaomi added that they’re also considering to bring this service to other Xiaomi devices.

“It is not a simple task for Xiaomi and its team to provide system updates and security patches to all of its previous smartphone models. However, the prospect of this challenge and meeting the desires of our customers is exciting. On one hand, we’re once again fulfilling Xiaomi’s brand promise to its global users - to provide amazing products. On the other hand, gradually extending the service life cycle of Xiaomi smartphones is a progressive move that furthers Xiaomi’s sustainability and environmental responsibility goals," said Albert Shan, Head of Product & Technology, Xiaomi International.

The promise of software updates come at a time when Android phone manufacturers are routinely criticised for the lack of firmware support beyond its launch year. Samsung promised three years of Android updates for its Galaxy phones in 2020, followed by Vivo’s promise of three years. Even LG, who is no longer dabbling in the smartphone business, offered three years of Android updates for its existing users as it left the scene. OnePlus did the same too, although they were earlier to commit to these updates.

Join HWZ's Telegram channel here and catch all the latest tech news!
Our articles may contain affiliate links. If you buy through these links, we may earn a small commission.
Previous Story
Alan Wake Remastered brings 4K visuals to Bright Falls in October
Next Story
Uncharted 4 and Uncharted: Lost Legacy remasters are coming to PlayStation 5 and PC