ASRock has joined the wolf pack of motherboard manufacturers who have announced their X79 offerings and have shared these preliminary stock phots. The four boards from ASRock are the X79 Extreme4, X79 Extreme4 M, X79 Extreme7 and X79 Extreme9. From first looks, all the boards have the same gold-capped capacitors mounted on the jet black PCBs in an opulent manner. These are high-end motherboards featuring PCIe Gen 3 and multi-GPU support for gaming and visualization pleasure.

They all sport active PCH cooling with mounted fans inlaid in heatsinks over their Southbridge chipset. This is similar to the one of ASUS' boards which we have previewed earlier, the Sabertooth X79; however, the engineers at ASRock have astutely positioned the mounted fans away from the first PEG slots to prevent them from being covered by a primary discrete graphic card mounted on the board.

The X79 Extreme4 and Extreme4 M look like a pair of brothers with the former boasting more SATA connectors as well as PEG slots compared to its young brother. 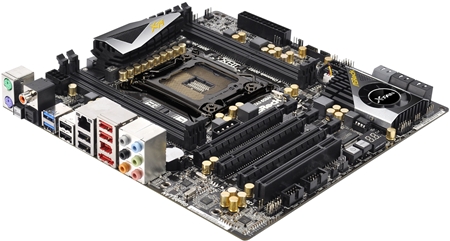 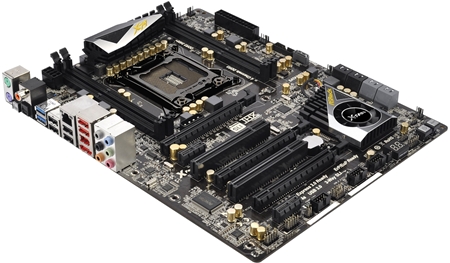 The X79 Extreme7 features a pair of crenellated heatsinks that are connected via heatpipes to the VRM of the board for further passive cooling. Such additional cooling features will be appreciated by overclockers as they push limits of the board. The unique feature of the board is that although it boasts of quad-channel DDR3 memory support, but it does it on 6 DIMM slots instead of the usual four or eight DIMMs we've seen. This is due to the fact that ASRock has designed the board whereby a pair of memory channels have access to one DIMM slot each (channel A and C), while another pair of memory channels can access dual DIMM slots each (channel B and D). 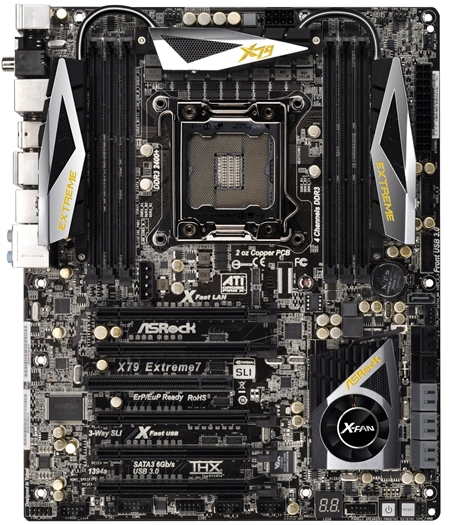 The last of the boards, the X79 Extreme9 has a crowning feature that makes it stand out from the rest. It has an add-on daughter card with a network interface and audio jacks. Such an implementation was first seen on the ASUS Rampage III Black Edition (Intel X58) motherboard whose ThunderBolt daughter card (which uses the PCIe interface and is not to be mistaken for Intel's Thunderbolt I/O interface technology), had integrated both the audio and network controllers onboard. At this stage, we've no information yet of the details of ASRock's implementation, but we'll be sure to highlight that when details come about. 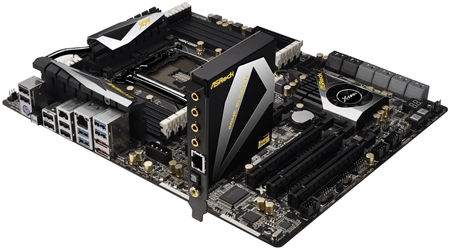 This board also supports OC memory modules and has a whopping twelve SATA connectors. For power users and hardcore rig builders to fill up a dozen SATA connectors with their SATA devices may prove to be a challenge too.

These four boards from ASRock have an air of opulence and seeming overt indulgence in richness - at lease from what the pictures show us. Whether such luxurious offerings will have any concrete performance scores to show remain to be seen. Do watch this space as we shall pit ASRock's offerings against its X79 competitors in the near future.