The Withings Activité Pop activity-tracking watch costs US$150, but it looks good

The Withings Activité Pop activity-tracking watch costs US$150, but it looks good 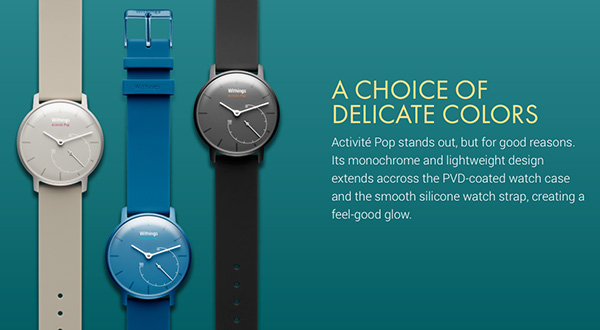 The still-very-new Withings Activité is a beautiful Swiss Made watch that’s also an activity tracker. Now, its maker Withings has brought another one to CES 2015, and it’s called the Activité Pop.

At US$149.95, the Activité Pop is considerably cheaper than the US$450 Activité. The former's design takes cues from its expensive sibling, but Withings has given the Pop’s watch case a PVD coating and paired it with a smooth silicon strap. The watch comes in three colors: Azure (blue), Shark Grey (close to black), and Sand.

The Activité Pop also features two hand dials, one showing the time and a secondary dial showing percentage progress of specific activity goals (target is set in the app). When the goal is achieved, the watch will vibrate. The watch also automatically recognizes and tracks swimming and running. Worn at night, it monitors sleep quality and wakes the user up with a gentle vibration.

Like Withings’ other heath products, the Activité Pop syncs with the Withings Health Mate app. Health Mate acts as a coach to help users achieve personal goals and includes an interactive leader board, personal “data insights,” smart reminders, and achievement badges; and it’s integrated with over 100 partners. At the beginning, Activité Pop will only be available for iOS users; an Android-compatible version will follow soon.

Withings also touts the longevity of the smart watch. It says the Activité Pop’s single standard watch battery lasts up to eight months, and it’s water-resistant for up to 30 meters. Also, the watch’s hands will move automatically when it crosses time zones or when the clock changes.

In the U.S., the Activité Pop will be available for immediate purchase at bestbuy.com on January 5, but stock is limted. It will hit Best Buy retail stores and online stores in March 2015.

Join HWZ's Telegram channel here and catch all the latest tech news!
Our articles may contain affiliate links. If you buy through these links, we may earn a small commission.
Previous Story
Intel announces new 5th generation "Broadwell" mobile processors at CES 2015
Next Story
Ultra affordable Nokia 215 ready to connect the next billion people to the Internet