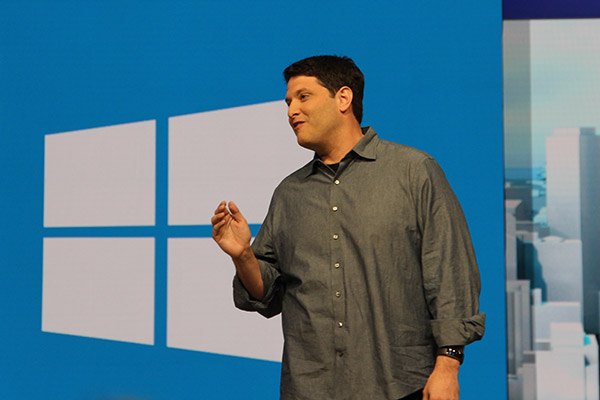 (For those wondering, just this January, the figure given was 200 million. And last October, it was 110 million.)

Needless to say, this user base growth momentum is important for Microsoft, if they were to successfully convince developers on the platform’s potential. Other number drops here at Build include the Windows Store seeing over 5 billion visits, and there are now nearly 1,000 Cortana apps. There are also new universal apps from Twitter, Uber, King, Disney, Wargaming, Square Enix, Yahoo, and WWE, with new apps on the way from Bank of America, Starbucks, Facebook, Messenger, and Instagram. 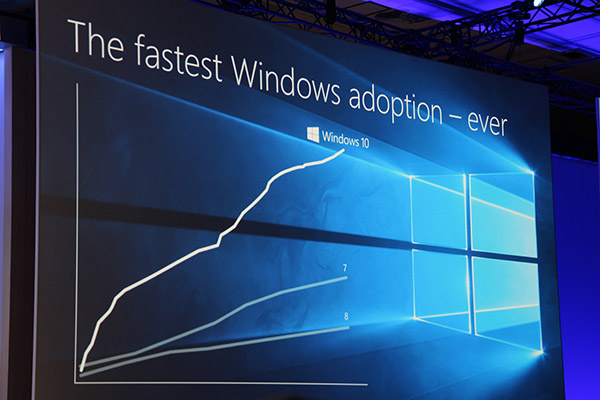 Some new features in this major update include Windows Hello biometric authentication coming to apps and the Edge browser, allowing you to login to websites quickly; and an improved ink experience, with a new 'Ink Workplace' that places ink-related tasks and apps (including Sticky Notes that integrate with Cortana, a Sketchpad with a digital ruler) front and center. In fact, you can now even ink in the Maps app; and in Word for example, you can reflow and erase text with the digital pen. Touch and pen also work hand-in-hand smoothly in Adobe apps. Broadly speaking, you can think of Windows Ink as a platform, too.

On the development front, Microsoft is introducing a Desktop App Converter for converting Win32 desktop apps to modern desktop apps. This is a play to bring more apps to the Universal Windows Platform, and in turn, onto the Windows Store. In the demo, Microsoft took Age of Empires II HD (from Steam) and converted it into a modern desktop app.

And yes, Bash is coming to Windows.

The Anniversary Update is also coming to Xbox One and HaloLens devices. Xbox in particular will be getting Cortana and developers will have the ability to turn any retail console into a dev kit. The Xbox app store is also merging with the Windows app store. Microsoft will share more features for Xbox at E3 in June.

Now speaking of Cortana, the personal digital assistant is getting smarter with the Anniversary Update, letting you receive proactive guidance from it throughout the day. It can also answer questions on the lockscreen, reschedule your appointments, find documents you're working on and send them to other parties, and monitor your email (even detect receipts) and notifications on other Cortana-running devices.

Unfortunately though, Cortana in the Anniversary Update will only be officially available for 13 countries: the U.S., the UK, Canada, Australia, India, Germany, Italy, Spain, Mexico, France, China, Japan, and Brazil.

In case you missed it, Windows 10 is a free upgrade until July 29 this year. The company’s goal is to hit 1 billion installs by 2018. Join HWZ's Telegram channel here and catch all the latest tech news!
Our articles may contain affiliate links. If you buy through these links, we may earn a small commission.
Previous Story
Intel unveils first ever TLC-based SSDs with the SSD 540s and SSD Pro 5400s drives
Next Story
Leaked: 4 upcoming NVIDIA Pascal graphics cards?