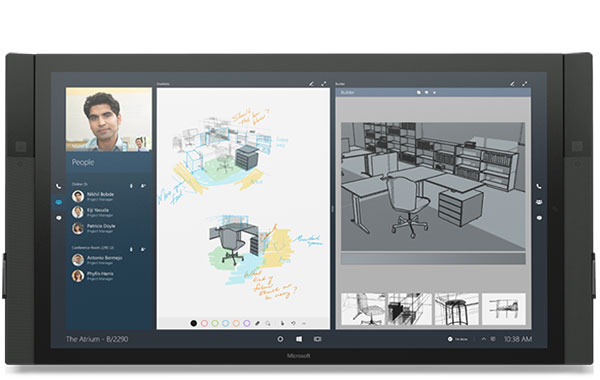 Available over Windows Update, the update is being rolled out in stages, though Microsoft expects all 600 customers who bought the Surface Hub would be running it by early November.

Here are some new features the Surface Hub is getting after installing the Anniversary Update:

Inking in Word, Excel, and PowerPoint - This means users can simply pick up a pen to start annotating their Word documents or Excel sheets. Inking tools can be found in the ‘Draw’ toolbar in the ribbon.

Simultaneous pen and touch support - Both hands or a mixture of pen and touch can now be used to edit content. That’s possible even with several apps opened at the same time.

Support from 3rd party peripherals - Select A/V peripherals from BiAmp, Jabari, Logitech, and Polycom are now tested and supported by the Surface Hub. Microsoft says it’ll be adding more in the coming months.

More details, including of other features like Flash support for Edge, the various Skype for Business improvements, support for replicating HDCP protected video content onto external monitors, can be found in the source link below.

Join HWZ's Telegram channel here and catch all the latest tech news!
Our articles may contain affiliate links. If you buy through these links, we may earn a small commission.
Previous Story
Microsoft to release next major Windows 10 update in April next year?
Next Story
Samsung still doesn't know what went wrong with the Galaxy Note7