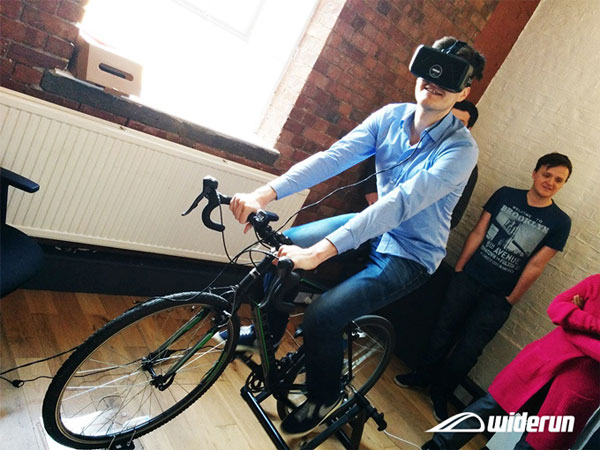 If the thought of heading for a jog only makes you want to dive deeper under the covers, Widerun may finally have hit on the solution to get you off the couch and working up a sweat. Soon you’ll find yourself biking in the great outdoors and hitting snow-covered Alpine trails. Well, sort of anyway.

Widerun is the first bike trainer that allows you to connect to the Oculus Rift virtual reality headset and experience immersive virtual worlds while remaining stationary on the bike’s base station. The brainchild of a team of cyclists, Widerun aims to breathe life into indoor training by allowing users to navigate immersive VR courses, videogame-type challenges and even social interactions.

Widerun doesn’t require you to purchase a dedicated VR bike from them – it will work with any bike you already own, as long as the wheel radius is between 26 to 29 inches. This includes a wide range of racing, multi-terrain, fixed gear and city bikes, so you can finally break out that moldering bike from the storage and put it to good use.

The latest prototype consists of the Widerun bike trainer and a steering component. The latter is essentially a digital compass that connects wirelessly to the base station. The bike trainer also transmits speed, which means that users can experience true acceleration in the VR world. An embedded microcontroller receives input from both the virtual environment and the bike trainer to regulate the user’s experience of factors like steering degree, speed and ground resistance when going up virtual obstacles like slopes. 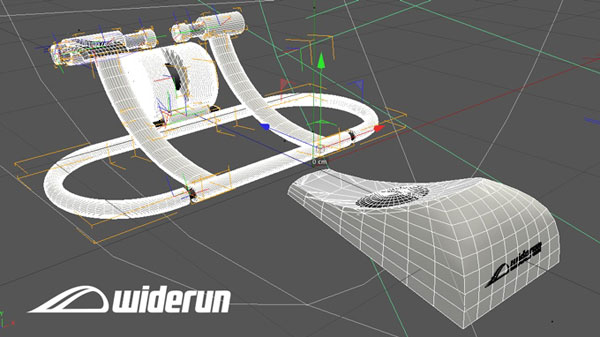 It also connects to your PC or smartphone via Bluetooth and will work with both Oculus Rift DK1 and DK2, the Samsung Gear VR headset, and any smartphone that can be used as a VR display. But bearing in mind that many of its targeted users probably don’t own a VR headset – let alone an Oculus Rift – Widerun will also be compatible with large external displays like smart TVs.

Widerun has already achieved half of its £30,000 goal on Kickstarter as of the time of writing, and is slated to begin shipping to backers in January 2016 if it manages to raise enough funds by 2 May. Widerun’s bike trainer and steering kit doesn’t come cheap – it’s available for pre-order on Kickstarter at an early-bird price of £275.

With that said, it’s not clear how much success Widerun will find at this early stage in VR development. The Oculus Rift isn’t even available for public purchase yet, and it’s difficult to say if it will even be available by Widerun’s projected January 2016 launch window. Furthermore, the team will need to successfully address issues like latency and motion sickness in order to deliver a compelling experience.