This is why HDMI 2.1 will be the display standard to rule them all

HDMI 2.1 will support up to 10K resolutions and Dynamic HDR

The HDMI Forum first unveiled the specifications for a new HDMI connector, called HDMI 2.1 in January. Now, Version 2.1 has officially been released to all HDMI 2.0 adopters, although it’ll likely be some time before we can reap its benefits.

Compared to HDMI 2.0b, HDMI 2.1 brings a range of significant upgrades in terms of higher video resolution and refresh rates. While the former only supports up to 4K resolutions and 60Hz, HDMI 2.1 will allow up to 60Hz for 8K and 120Hz for 4K.

In fact, if you want, it supports up to an eye-watering 10K resolution at maximum, but this will probably be mostly for commercial AV and other industrial use cases. For everyone else, you probably won’t even catch a whiff of 10K content any time soon.

In addition, the standard works with Dynamic HDR, which allows content creators to control things like color levels, contrast, and brightness on a per-frame basis. This is a big step up from applying the same settings to an entire film or video clip, which can lead to less than optimal results if the video contains both bright and dark scenes.

A lot of Dynamic HDR content may end up coming from games and streaming services, although the common HDR10 standard doesn’t currently support it. On the other hand, Dolby Vision and HDR10+ do.

Another interesting feature is something called Variable Refresh Rate (VRR), which as its name suggests, works similarly to G-Sync and FreeSync and eliminates lag, stutter, and frame tearing for more fluid gameplay.

A smaller quality of life improvement called Quick Media Switching (QMS) reduces the delay when switching between different display sources, so you shouldn't encounter a blank screen as often.

The final capability is eARC, or support for object-based, multi-channel audio. This means things like Dolby Atmos, DTS:X, and DTS Master will be supported over HDMI. 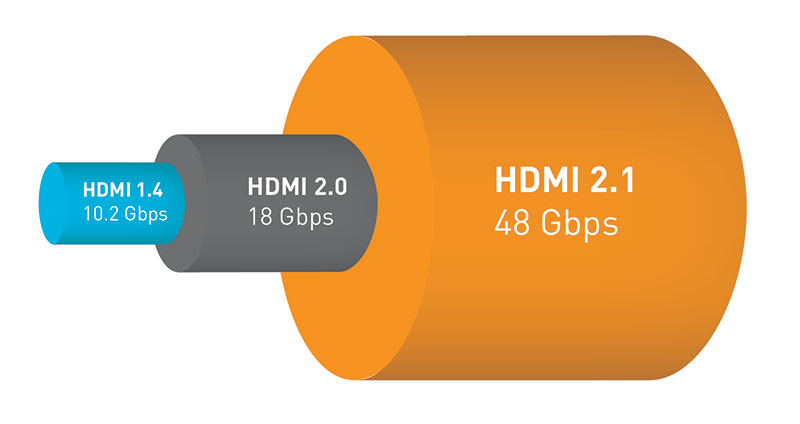 A lot of these new features are possible thanks to the increased 48Gbps bandwidth (it was 18Gbps before), so you’ll need a new ultra-high speed HDMI cable that supports this.

However, the cable is backwards compatible, so it can be used with existing HDMI devices. Furthermore, not all of the new features that HDMI 2.1 brings will actually require the new cable.

The new specification far surpasses what’s on offer today from content creators and hardware manufacturers, but now that it’s officially available, we may start seeing it pop up on more forward-looking devices.

Join HWZ's Telegram channel here and catch all the latest tech news!
Our articles may contain affiliate links. If you buy through these links, we may earn a small commission.
Previous Story
Is this the future of home security cameras?
Next Story
Does your Google Pixel 2 reboot for no reason?