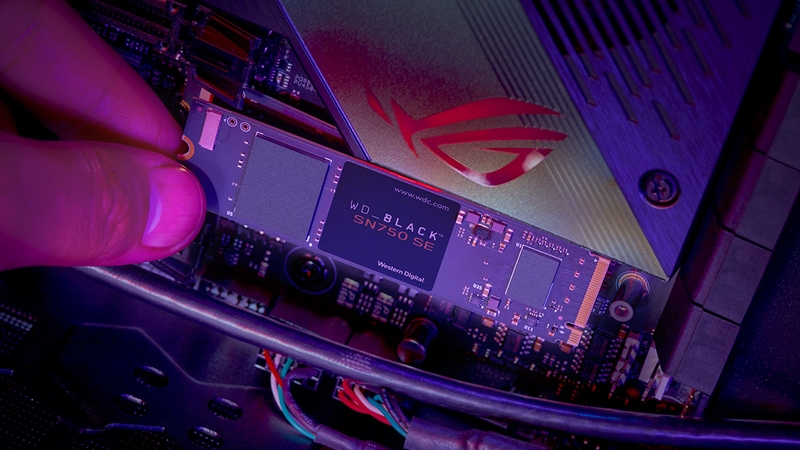 As far as solid-state drives (SSDs) go, Western Digital Corporation is pretty up there on the list of prominent brands. And after their recent Flash Perspective event, gamers who are looking into buffing up their storage for PC or console will have two new WD Black options to consider - the SN750 SE NVMe SSD and the D30 Game Drive SSD.

The former, which is tailored for gaming PC and laptop setups, comes in three different capacities: 250GB, 500GB and 1TB. It features a powerful pair of inclusions that work in harmony to enable blazing-fast read speeds of up to 3,600MB/s - these are its DRAM-less internal storage solution and its PCIe Gen 4 technology, the latter of which is also backwards compatible with PCIe Gen 3. Additionally, this new SSD also consumes 30% less power than its predecessor, allowing gamers, especially those who play on laptops to get more "mileage" out of each full charge. Finally, the handy WD Black Dashboard feature allows users to stay updated on the current state of their drive as well as optimise performance in gaming mode.

As for the D30 Game Drive SSD, if you're primarily a console gamer, this is the one you'll want to focus on. It homes in on minimising load times, which pairs well with the brand promises of next-gen consoles like the PlayStation 5. Sporting read speeds of up to 900MB/s and capacities of up to 2TB, which Western Digital touts as being sufficient for up to 50 different games, this SSD even includes a detachable stand so you can tuck it right next to your console.

As for pricing and availability, the SN750 SE will be available at prices starting from S$99 from end-July 2021, while the D30 features price tags starting from S$219 and is already available for purchase at WD's official Shopee store and other outlets.

Join HWZ's Telegram channel here and catch all the latest tech news!
Our articles may contain affiliate links. If you buy through these links, we may earn a small commission.
Previous Story
The buildable adidas Originals LEGO Superstar Sneaker is a hypebeast dream
Next Story
E3 2021: Resident Evil Village is getting an expansion by popular demand