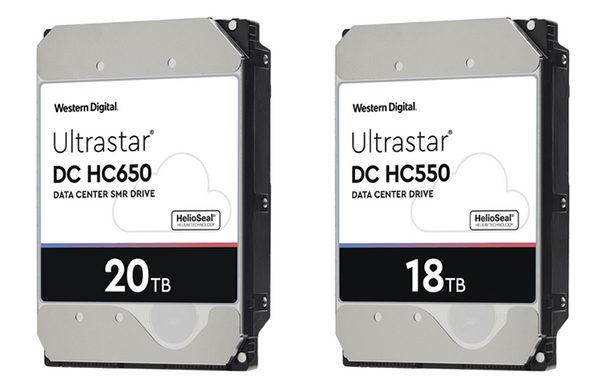 Western Digital might be investing heavily flash memory but it's not giving up on good old hard disk drives yet.

The first drive is the Ultrastar DC HC550, which is available in capacities of 16TB and 18TB.

The drive is helium-sealed, features nine platters, has top and bottom attached motors, a 7,200rpm spin rate, and a host of sensors to ensure reliability and performance.

The second drive is the 20TB Ultrastar DC HC650, which uses SMR technology where data tracks are written slightly on top of each other to increase areal density.

The Ultrastar DC HC650 is also helium-sealed and has nine platters and a 7,200rpm spin rate. The drive will  come in either a SATA 6Gbps or SAS 12Gbps interface.

Western Digital plans to sample the two drives to customers by the end of year. Actual shipments should commence some time in the first half of next year. No word on pricing yet but don't expect these drives to come cheap.

Join HWZ's Telegram channel here and catch all the latest tech news!
Our articles may contain affiliate links. If you buy through these links, we may earn a small commission.
Previous Story
Gigabyte has a zero bright dot guarantee for all its Aorus tactical gaming monitors
Next Story
iPhone 11 lineup found to be using Intel modems