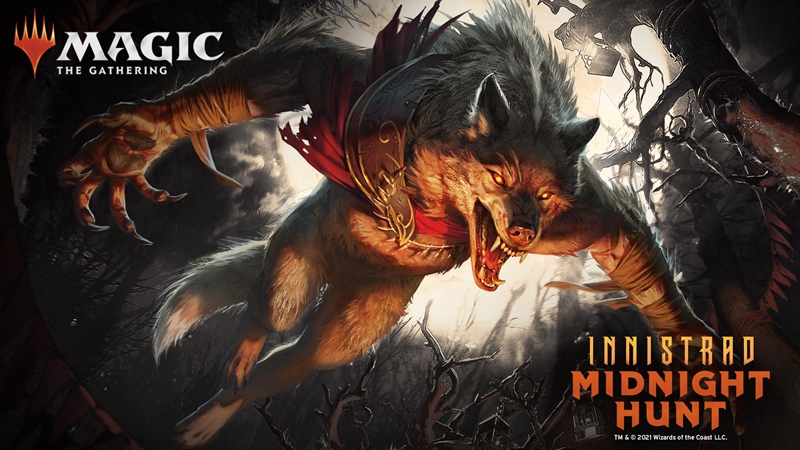 With Halloween sneaking up in a month and a half, Wizards of the Coast has decided to launch a pre-emptive attack on Magic: The Gathering players (and their wallets) with the Innistrad: Midnight Hunt booster on 24 Sep, and as the cover image suggests, werewolves are the main focus of the set.

Jokes aside, as a fellow TCG player, I'm aware that a booster isn't usually something companies spring on players overnight - they're usually announced months in advance, so I'm sure many folks have already set aside the relevant budget for their desired cards (and foils). Nevertheless, let's take a brief look at what this new set has to offer.

Fundamentally, Innistrad: Midnight Hunt takes its aesthetic pages from classic Gothic horror and folk tales. Think movies like Underworld - it's not far off that mark, though of course, this one doesn't have Kate Beckinsale and modern firearms in it. In terms of gameplay, the booster introduces three new additions - one keyword, one mechanic, and a new type of card frame, though the first of those is probably the coolest one.

Playing on the concept of how werewolves are human by day and feral at night, we've got the Daybound and Nightbound keyword pair, which will be featured on the 19 new double-faced cards, or DFCs in the set. Unfortunately, as much as I'd like to do so, we won't be delving into the specifics here, so the bare minimum you need to know about this is that the state of the game will rotate between "day" and "night" depending on the number of spells a player casts during their turn. Accordingly, the cards that they play with these keywords, as well as their opponents' will swap forms depending on which game state is currently active. 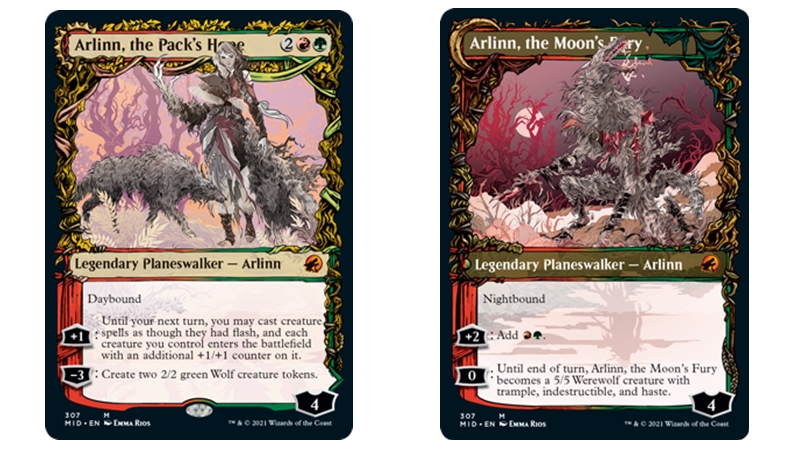 Next, there's also the Flashback mechanic which, admittedly isn't a new addition per se. This fan-favourite mechanic has finally been revived from the game's original Innistrad booster, and as our description suggests, it allows players to cast cards from their graveyard for their associated Flashback cost. However, after they're used from the graveyard this way, they're exiled and removed from that particular match.

Finally, for those who collect MTG cards for their amazing art, you'll definitely enjoy the new Showcase Equinox Frame, such as the one for the new Planeswalker Arlinn Kord displayed earlier. Much like the Daybound and Nightbound rotation, the colours and shades of the frames are different on each side of the card, so you could technically see it as getting two cards for the price of one, which is neat.

As for availability, the Innistrad: Midnight Hunt booster will be available in Draft, Set and Collector boosters, and it will also be featured in two Commander decks and the similarly-named Midnight Hunt bundle.

For more information on the set and the Day-Night cycle (which is truly fascinating), make sure to check out the official Innistrad: Midnight Hunt page.

Join HWZ's Telegram channel here and catch all the latest tech news!
Our articles may contain affiliate links. If you buy through these links, we may earn a small commission.
Previous Story
PUBG: NEW STATE's pre-registration count has surged past 40 million
Next Story
Sony's Pulse 3D Wireless Headset releases in Midnight Black for Southeast Asia on 29 Oct