Update: This article was first published on 11th January 2017. The drive is finally coming to Singapore and we've updated the local prices below.

After launching their mainstream Blue and Green series of SATA based SSDs, WD is prepping to launch their second wave with their iconic Black series for enthusiasts.

The WD Black PCIe SSDs will be the company's first PCIe based SSD as the previous two series only utilized the SATA interface. Utilizing PCIe gen.3  x4 interface, the drive boasts a sequential read speeds up to 2,050MB/s - far faster than the WD Blue SATA that only managed 540MB/s and probably being held back by its SATA controller. WD says the drive has comprehensive thermal throttling and power management alogrithms to preven overheating and maintain high performance at all times.

Unlike the Blue and Green series, the Black PCIe SSD will only be available in the M.2 2280 form factor and will not be available in traditional 2.5-inch drive format. Storage capacity options will be 256GB and 512GB, and costs US$109.99 and US$199.99 respectively. For the price, you'll also get a free downloadable WD SSD dashboard (as shown below) for monitoring the drive's health, as well as a copy of Acronis True Image WD Edition software. 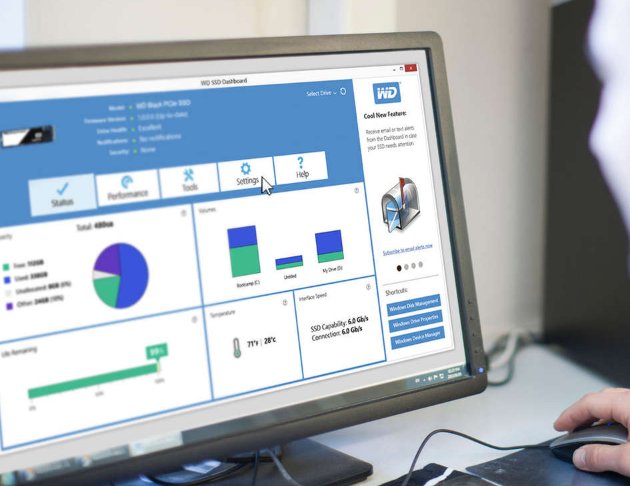 WD Black PCIe is currently on pre-order at WD's website and will only ship out on Valentine's day, February 14th, onwards.

Probably the number one question on everyone's mind is if it would give Samsung a run for their money? Let's take a quick look at the specs and see how the upcoming WD Black matches up:-

Unfortunately, WD's latest new attempt doesn't seem like it would make much of a dent to Samsung's dominance in the SSD space. At the rated specs, it could probably only compete against Samsung's previous flagship, the SSD 950 Pro.

Still, specs are just an indication of how it might perform and we're eager to get our hands on this drive to find out where it stands in our testing and if might have a more appealing local price when it's officially available.

After much time has passed since it was first launched in USA back in February, we've just got word that the WD Black PCIe SSD drives in M.2 form factor (the only option available) have made its way into the local retail channels.  Prices are as follows:-

Can it present itself as a formidable challenger to the Samsung  SSD 960 Evo? We'll find out soon!