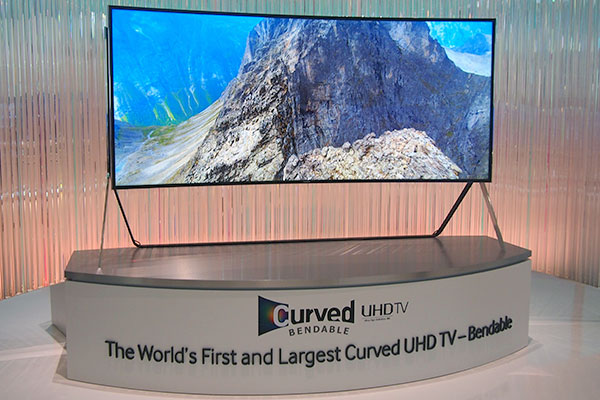 You wouldn’t think that Samsung, the biggest player in the TV market, would go to IFA and just announce some smartphones, right? This year, the Korean company brought to Berlin a total of 17 curved TV models that were launched in the European market since July.

While the previously-sighted 105-inch, 21:9 curved UHD TV is still one of the highlights, a lot of attention this time round is on a 105-inch, bendable UHD TV with a 21:9 aspect ratio. It’s termed ‘bendable’ because the TV is able to transition between curved and flat modes based on the user’s preference. Those who followed our CES coverage will remember that the company demoed an 85-inch prototype in January.

Like the company’s latest crop of UHD TVs, this 105-inch bendable UHD TV features a Timeless Gallery design and a curvature of 4200R when curved. It also offers UHD Dimming (a local dimming method) and UHD upscaling. The TV is destined to hit the European market, but neither pricing nor exact availability is given. Considering that the aforementioned 105-inch (fixed) curved model goes for US$120,000, this more dexterous sibling can only be more expensive.

Check out the TV in action in the video below:

Join HWZ's Telegram channel here and catch all the latest tech news!
Our articles may contain affiliate links. If you buy through these links, we may earn a small commission.
Previous Story
Sony announces new lens-style cameras and a smaller Action Cam
Next Story
NVIDIA sues Samsung and Qualcomm over graphics chip patents