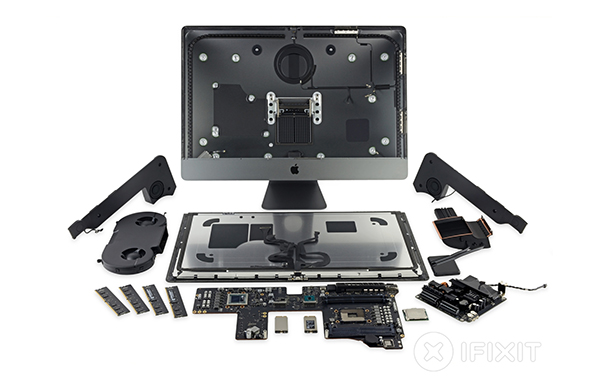 iFixit has just posted one of its customary teardown posts of Apple's new iMac Pro.

Though the iMac Pro looks just like an ordinary iMac (but in space grey), its innards are almost completely different.

For example, the iMac Pro doesn't have the small hatch in the back that regular 27-inch iMacs do that allows users to easily upgrade RAM.

In fact, iFixit said that replacing the RAM in the iMac Pro, despite it using standard 288-pin DDR4 EEC RAM sticks, is "a major undertaking" and that most users will need to get it replaced at an Apple Store or by an official service provider. 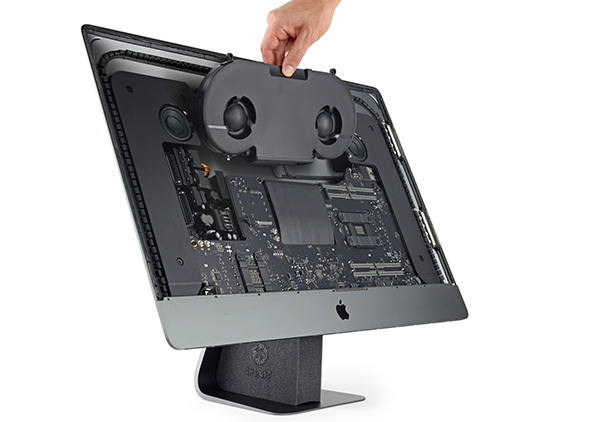 iFixit also says that the CPU and SSD are both modular and removable, and could "theoretically" be upgraded. However, a potential snag is that these components are custom-made and might not be replaceable with off-the-shelf components.

iFixit also discovered that the iMac Pro, to keep its powerful Xeon and AMD Radeon Pro Vega GPU cool, has a rather elaborate cooling system that is comprised of a huge heatsink and a large dual-fan cooler.

Finally, iFixit gave the iMac Pro a repairability score of just 3 out of 10 saying that key replaceable components are buried and require a lot of disassembly for access.

To see more photos and for a detailed breakdown of the iMac Pro's internal components, click the link below.

The iMac Pro was recently released in Singapore and prices start at S$7,188 for the 8-core variant with 32GB ECC RAM, 1TB SSD, and AMD Vega 56 GPU with 8GB HBM memory.

Join HWZ's Telegram channel here and catch all the latest tech news!
Our articles may contain affiliate links. If you buy through these links, we may earn a small commission.
Previous Story
Intel's new Core i7 will feature RX Vega graphics
Next Story
LG Display has successfully made an 88-inch 8K OLED display