Watch how the Huawei Nexus 6P fared against scratching, burning and bending

Watch how the Huawei Nexus 6P fared against scratching, burning and bending

Remember the #Bendgate 2014 saga that affected to the Apple iPhone 6/6Plus? It has spawned many other videos such as the infamous SquareTrade tests on the Samsung Galaxy S6 edge where the latest smartphones are put through similar or worse torture tests to determine their durability. This time, JerryRigEverything put the Huawei Nexus 6P through a series of tests to see how well it fared.

The first test uses the "Mohs Scale of Hardness" to determine how resilient the Corning Gorilla Glass 4 display of the Nexus 6P is. As a point of reference, 1 is the equivalent of talc powder and 7 is similar to quartz. The highest level, 10, is as hard as diamond. In the video, the display of the Nexus 6P started to show faint scratch marks at 6 while scratches were more visible from 7. Upon tapping the scratched display, it cracked diagonally across! The second test involves using the flame from a lighter on the display. Strangely, the affected area turned white when heat was applied while other phones tested apparently turned black. Even after turning off the phone, the white spot remained and the narrator described it as "a sad day for the Nexus 6P".

Moving on to the third test, the blade from a penknife was used to scratch the rear of the Nexus 6P which is made of aeronautical-grade anodized aluminium. Unfortunately, it was revealed that the Nexus 6P failed terribly in this section compared to the HTC One M9 and the Apple iPhone 6s. 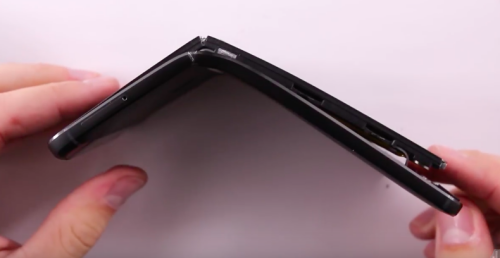 Last,but not the least, the Nexus 6P was subjected to the ultimate test - the bend test. The Nexus 6P easily bent under "a little pressure" from the narrator who described his experience as disappointing and went as far as branding the phone "a joke". This bend test generated a lot of comments as to whether it was valid.

Many viewers felt that it is not fair to do a bend test on the phone which has already been compromised by scratches and a crack. Another video uploaded by Review Center India shows that the Nexus 6P does not bend as easily. Regardless of who is right and wrong, we reckon that most consumers do not subject their beloved phones to such torture tests in their daily lives.