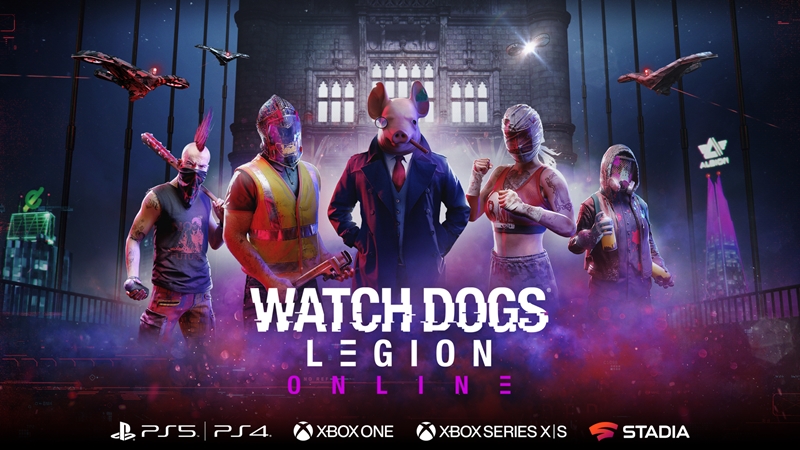 If you told me ten years ago that I'd be walking around a futuristic London tasering security guards as a kindly old grandma, taking control of a James Bond-esque spy and robbing banks as a construction worker all in the same game, I might have found it really hard to believe.

Well now you can do all of that in Watch Dogs: Legion, and if you feel one lethal grandma isn't hilarious enough, you can bring along three more. Earlier today, Ubisoft announced the launch of Legion's long-awaited Online Mode for all console versions of the game, so players on Xbox One, Xbox Series X/S, PlayStation 4, and PlayStation 5 can now take to the streets of a battered dystopian London for free with their best buddies in a variety of PvP and co-op modes.

On top of allowing open-world co-op play for up to four people, Legion's Online mode also brings with it a vast number of new events, missions, achievements, and a 4-player Spiderbot Arena PvP mode for players to enjoy. Additionally, do make a mental note to check back on March 23 for "Leader of the Pack", an intense four-player Tactical Op mission that will push your teamwork and efficiency to the limit.

Meanwhile, Season Pass holders will be getting some extra spice in the form of two exclusive single-player missions - Guardian Protocol and Not In Our Name. The first of these has you take down a powerful A.I. seeking to dominate humanity using weaponised drones, while the second pits you against a fake DedSec helping a tabloid owner to blackmail his clients.

As for when all of this is coming to PC, it's sad to say but PC players are just going to have to continue waiting - the developers haven't posted any updates on when they expect to finish working out the kinks, so yes, it's probably going to suck for a while.

Join HWZ's Telegram channel here and catch all the latest tech news!
Our articles may contain affiliate links. If you buy through these links, we may earn a small commission.
Previous Story
Netflix unveils images and a release date for new African samurai anime Yasuke
Next Story
Overwatch's new limited-time event is a grand Pachimari celebration