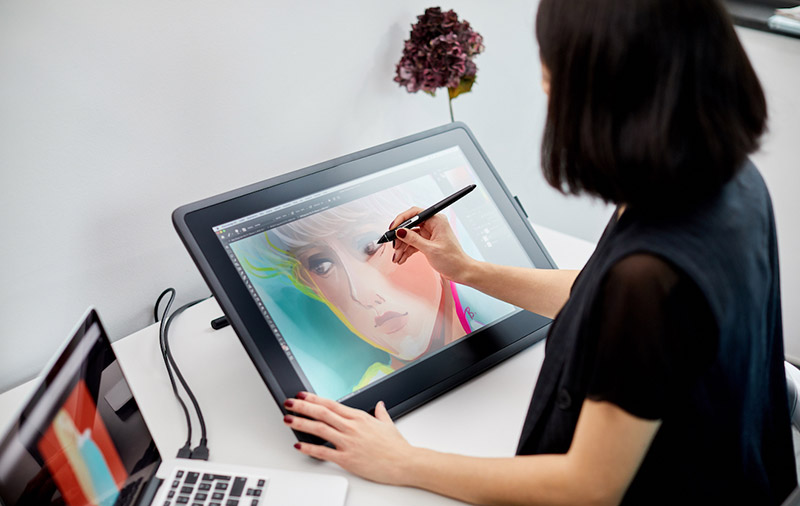 A graphics tablet that has both a digitizer and an LCD screen, Wacom’s Cintiq line of “creative pen displays” has always found favor among graphic artists who like to draw directly on the screen. The company recently launched the Cintiq 16, which comes with a 15.6-inch Full HD IPS display; and now, the bigger Cintiq 22 is also in town.

Sporting a 21.5-inch Full HD display that covers 72% of the NTSC gamut (or 96% sRGB), the Cintiq 22, like the Cintiq 16, comes with Wacom’s Pro Pen 2. By using the company’s patented electro-magnetic resonance (EMR) technology, this digital pen doesn’t use any batteries, but instead draws power from the tablet.

The pen also reacts to the tilt of your hand, supports 8,192 levels of pressure sensitivity, and has a low activation force. Coupled with the anti-glare film that’s on the screen, Wacom says drawing on the Cintiq is as natural as drawing on paper.

While the Cintiq 16 features built-in fold-out legs so you can go from almost flat to a 19° incline quickly, the bigger Cintiq 22 comes with an adjustable stand. Connectivity-wise, the Cintiq 16 uses a 3-in-1 port at the top of the tablet for power, video, and data, but the Cintiq 22 features separate HDMI and USB-A ports. Both tablets come a detachable pen holder, three replacement nibs, as well as a nib removal tool.

The Cintiq 22 is priced at S$1,499 and you can find it at authorized local Wacom retailers, the Wacom eStore, and Wacom’s stores on Lazada and Shopee. The smaller Cintiq 16 is going for S$888.