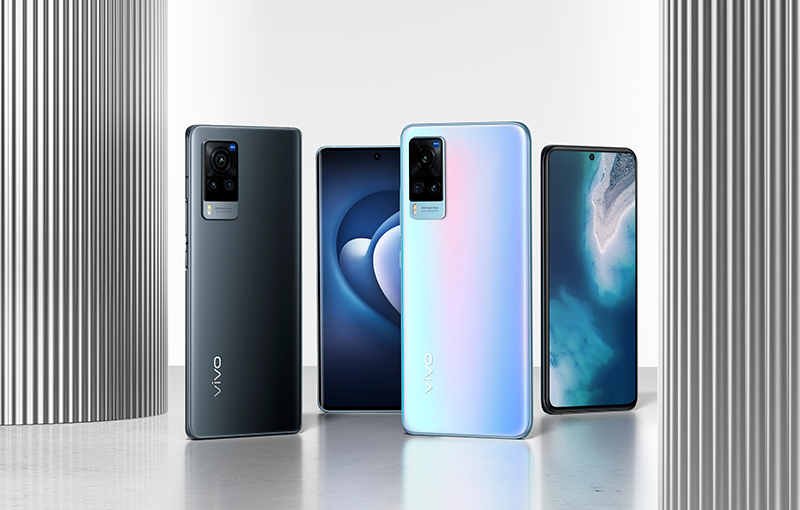 Following the March 2021 global announcement of the Vivo X60 series smartphones, Vivo is finally ready to bring the Vivo X60 and X60 Pro to Singapore.

The new X60 mobiles follow the tenets that guided its flagship predecessor, the X50 series. X60 series phones pack a host of upgraded features and internals that cut across the two available models.

Partnership with ZEISS for imaging

As announced at its global reveal, Vivo partnered up with ZEISS to co-engineer the cameras across the X60 range. A key ZEISS-related feature is its Biotar Portrait Style, a portraiture photography feature that emulates professional portrait shots of people with heightened centre sharpness and swirl-patterned bokeh outside the area of focus.

While the details are light on ZEISS's involvement with Vivo X60's cameras beyond its portraiture feature, Vivo said that it "collaborated with ZEISS to bring unparalleled sharpness, clarity and image quality to Vivo smartphones" by tapping on ZEISS's camera technologies across its optical lenses, sensors, image processing, and other multi-modal features that stemmed from its 175-year expertise in pleasing professional photographers. Inside the Vivo X60 and X60 Pro is the Qualcomm Snapdragon 870 chipset. It's technically a flagship-grade Snapdragon chipset based on the same architecture and manufacturing process that gave us last year's flagship-grade Snapdragon 865, even though it's not Qualcomm's true flagship Snapdragon 888 (which uses a newer manufacturing process that squeezes more power into the same space). That said, the X60 and X60 Pro's new processor is still a step up from its predecessor since the X50 Pro was using a mid-range chipset (SD765) previously.

Vivo said that using SD870 gives it 10% higher CPU and GPU performance than the SD865, and the phones support 5G connectivity. In tandem with its processing hardware, Vivo also implemented a memory management feature called Extended RAM. These hardware and software features allow the X60 series phones to support instant-opening and standby for up to 25 apps simultaneously.

Much like its predecessor, Vivo is bringing back its ultra-thin aesthetic to the new X60 series. The X60 is just 7.36mm, while the X60 Pro is at 7.59mm. Further to its lithe look is a Dual-Tone Step camera housing that minimises excessive lumps that keep the rear camera lenses flush with the lens housing. Vivo also implemented a new texture for the rear - AG Glass with Satin finish and anti-fingerprint coating - to provide an anti-reflective, frosted finish and glass body.

Other perks that cut across both models are its edge-to-edge AMOLED display with 120Hz refresh rate and 240Hz response rate. Both have 6.56-inch displays rated at FHD+ resolution (1080p). They also pack HDR10+ certification, with SGS Eye Care Display and SGS Seamless for added viewing comfort. Also identical on both the X60 and X60 Pro are its front and back cameras - the triple rear camera configuration consists of a 48MP main and two 13MP secondary shooters (telephoto with 2x optical zoom and ultra-wide with 120˚ FOV), while the front camera is rated at 32MP.

Unfortunately, Vivo's promise of three years of Android software support doesn't apply to the X60 series, because it's not launched after July 2021.

The devices are available at M1, Singtel, StarHub, e-commerce platforms, Vivo's flagship store at Causeway Point, and authorised dealers islandwide. Both phones are available in Midnight Black and Shimmer Blue.

Each purchase of a Vivo X60 entitles the customer to a gift box and DJI Osmo Mobile 3 (worth S$228 in total), while stocks last.

Each purchase of a Vivo X60 Pro entitles the customer to a gift box and Harman Kardon Aura Studio 3 (worth S$498 in total), while stocks last.

The period to redeem the above-mentioned premiums is between 15 May to 30 June 2021.

Vivo Singapore said that there are no plans to bring the Pro+ variant here, similar to its X50 range.

Join HWZ's Telegram channel here and catch all the latest tech news!
Our articles may contain affiliate links. If you buy through these links, we may earn a small commission.
Previous Story
ASUS ZenFone 8 comes to Singapore on 28 May, pre-orders available
Next Story
Spotify adds offline music downloads on the Apple Watch