This video of people buying NVIDIA GPUs in the U.S. reminds us of the Hunger Games

This video of people buying NVIDIA GPUs in the U.S. reminds us of the Hunger Games 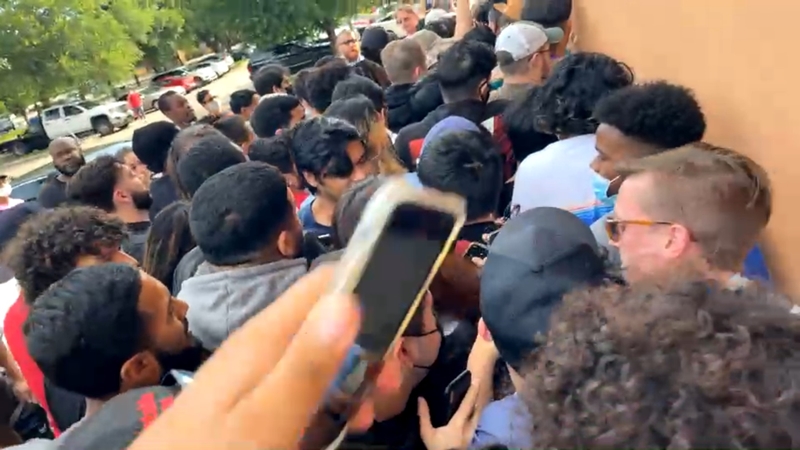 By now, most of us should be thoroughly familiar with the acute GPU shortage plaguing the gaming industry, and despite the fact that NVIDIA has already managed to create a separate supply of graphics cards catered specially for cryptocurrency mining, it's worth noting that this is hardly an overnight solution.

In fact, this video of a restock event outside a Micro Center store in Dallas, USA which was taken by a user named PrestonALewis (via Twitch) shows us how important it is for us to recognise that. In it, we're given a glimpse of the snaking queue of gamers waiting to buy the restocked RTX cards, but after being informed by shop staff that there would probably not be enough to go around, people quickly started to lose their cool. The spike in tension and animosity is quite palpable, and when the doors open around four minutes into the video, it's open season.

If the embedded video doesn't work for you, check it out here instead!

I'll be frank. This is no shopping trip - it's borderline anarchy. And it's made even worse considering COVID-19 is still out and about - having so many people condensed into a small area cannot be good for pandemic control. While we can certainly understand that everyone is eager to get their hands on a spanking-new GPU for their gaming setups, it should also not come at the cost of our civility.

Additionally, this should also serve as a wake-up call for shops to have proper crowd management protocols in place, especially for such high-demand items - it'd be insane if every restock event were to turn out in the same chaotic manner as it did in PrestonALewis' video. After all, we're not criminals. simply gamers looking to buy new graphics cards, and we certainly didn't volunteer as tribute for the 2021 edition of the Hunger Games.

Join HWZ's Telegram channel here and catch all the latest tech news!
Our articles may contain affiliate links. If you buy through these links, we may earn a small commission.
Previous Story
WhatsApp backpedals on account limiting if you don’t accept its new privacy policy
Next Story
This shop disguised a customer's gaming mouse as study material to avoid rousing suspicion