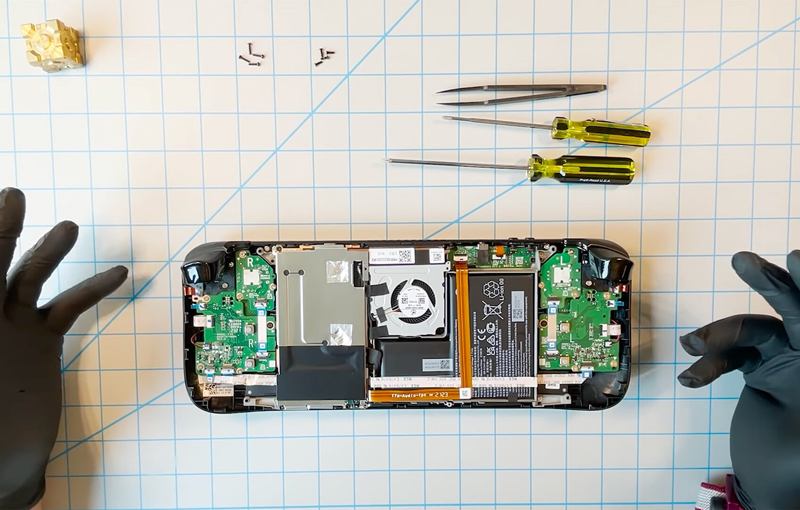 Valve has done an odd thing by posting a video teaching users how to mod its upcoming handheld gaming console, the Steam Deck. The video gives users a closer look at the Steam Deck’s internal guts, showing them how to modify its hardware to their liking. However, they were also sure to stress that no one should ever do this, because you’ll probably break your console in the process.

The video covers the Steam Deck’s thumbsticks and SSD (solid-state drive) specifically, with a friendly host from Valve taking the device apart. It takes all of 20 seconds for the narrator to stress that, “We at Valve really recommend that you don’t open it up.” The device isn’t designed to be user-swappable, as its parts were chosen carefully for a specific construction. Opening the device up could mess everything up ‘profoundly’. One of those risks includes the Steam Deck spontaneously combusting, which Valve states is a Very Bad Thing.

The Steam Deck functions like a gaming PC, so it’s only natural that users have wondered if they can customise it according to their needs - and you can do so, this video shows you how. Just be warned that it might not go well for you. The video goes on to show how users can switch out the SSD and thumbsticks, as well as the inherent risks that come with doing so.

Swapping out an SSD might be tempting to those who have purchased the cheapest Steam Deck option however, as it comes with a paltry 64GB of memory. We’re not sure you could even play a Call of Duty game with that amount of storage space. Valve suggests using the device’s micro-SD slot to expand storage as needed instead, and as an added bonus, doing this avoids the possibility of your brand-new Steam Deck going up in flames.

Join HWZ's Telegram channel here and catch all the latest tech news!
Our articles may contain affiliate links. If you buy through these links, we may earn a small commission.
Previous Story
Casetify reunites with BTS for new 'Butter'-inspired collection
Next Story
Singapore moves to a proactive stance on cybersecurity to close security skills gap