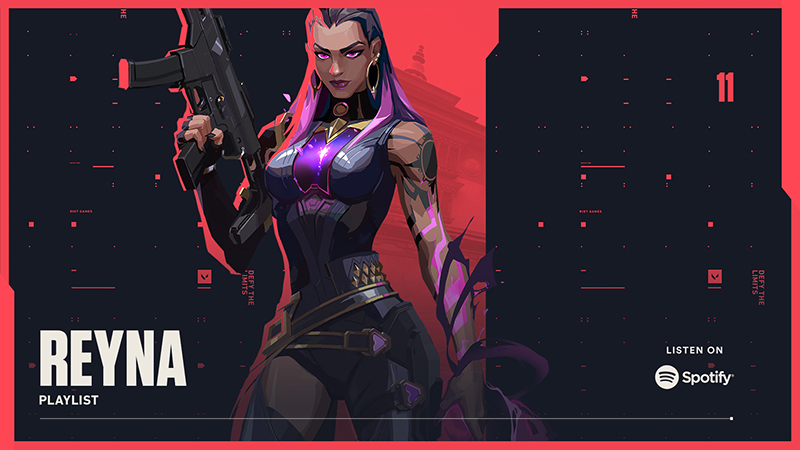 Riot Games has revealed the 11th Agent for Valorant, a Duelist-class character that is shaping up to be the ideal Agent for aggressive players who like to take fights – and are confident of winning them. Reyna's gameplay revolves around getting kills, and it seems like she's near useless if you don't manage to frag out.

While Riot hasn't detailed her individual abilities yet, a teaser trailer posted on Twitter does provide some idea of how she works. Her free ability appears to be some kind of life steal, accompanied with the delicious voice line "Give me your heart!", layered with appropriately menacing tones.

Valorant lead character designer Ryan "Morello" Scott helped clarify her abilities further on Twitter. According to him, when Reyna kills enemy players, they drop something called Soul Orbs, which function as a resource for two of Reyna's abilities. He described her as a "feast or famine" character that is built around racking up kills. Reyna's has an ability that lets her heal her health to full, including "overheating" up to 50 armour. Her other ability lets her turn invulnerable for a few seconds, but she'll be unable to shoot, so this seems more like a tactical ability that could help you get out of a sticky situation and reposition.

Separately, Reyna also appears to have some sort of utility to blind enemies or at least narrow their vision, accompanied by the voice line "See nothing!".

Finally, her ultimate gives her a faster fire rate and reload, and also lower recoil. It resets on kill and also enhances her Soul Orb skills.

The most valuable part of Reyna's kit may be the fact that she has the ability to take more than one fight at full health. While other Agents might win a duel but be taken down to low health, and thus made more likely to lose the next fight, good Reyna players may be able to keep challenging angles with confidence.

In Morello's words, "Reyna has the potential to pop-off like no one else, avoiding being traded on or healing so you have to beat her square-up each time. If she doesn't get kills, though, she's BAD. Like, near-useless. You're making a big bet picking Reyna."

So far, the reaction to Reyna has been rather positive. Unsurprisingly, some of the best players who are used to getting big numbers on the scoreboard are fully on board with her.  Lucas "Mendo" Håkansson has responded to the teaser trailer by saying, "reyna main reporting in", and so has Coby "Dizzy" Meadows.