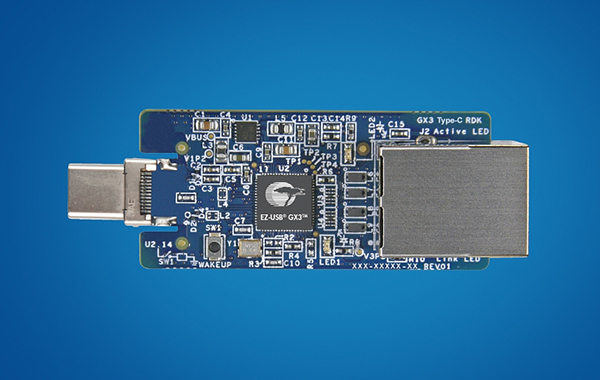 Cypress Semiconductors demonstrated its EZ-USB GX3 controller at IDF 2015 in San Francisco, showing that it is now possible to achieve close to Gigabit Ethernet speeds over a USB 3.0 – also known as USB 3.1 Gen 1 – connection.

As manufacturers scramble to create thinner devices with every generation of products, many laptops and ultrabooks have come to omit certain I/O ports like the Gigabit Ethernet port. And while Wi-Fi is sufficient for most users, power users will still miss the speed of a wired connection, and god forbid you wind up in a hotel room with no Wi-Fi.

The EZ-USB GX3 controller managed to deliver speeds of up to 910Mbps via a proprietary “burst transfer mechanism”, in the words of Cypress. In comparison, a more conventional Gigabit Ethernet port can support speeds of up to 950Mbps, a fairly negligible edge over the Cypress solution.

With speeds close to that of a regular Gigabit Ethernet port, the EZ-USB GX3 controller manages to overcome the traditional limitations of Gigabit Ethernet to USB 3.0 adapters, which usually offer much reduced throughput.

The new controller is associated primarily with the USB Type-C connection, but it will in fact support any USB 3.0 connection, including both Type-A and Type-B physical ports.

Furthermore, the controller is capable of handling both USB 3.0 and Gigabit Ethernet power standards. Regular USB 3.0 to Gigabit Ethernet adapters are usually unable to support the low-power modes of both interfaces, but the GX3 controller manages to bridge this gap with multiple power-saving modes for improved power efficiency.

This includes compliance with the USB Link Power Management (LPM) policy and 802.3az Energy Efficient Ethernet. In addition, it supports other advanced power management features like Wake-on-LAN, dynamic power saving modes during idle or light traffic, and an AutoDetach feature that soft-disconnects the controller from the USB host if the Ethernet cable is unplugged on the router’s end.

Cypress envisions widespread adoption of the GX3, so it is including driver support for all major operating systems, including Windows, Mac OS, Linux, Android and Chrome. This means that the vast majority of laptop manufacturers will be able to incorporate the GX3 into their systems, and users will no longer have to sacrifice network throughput for a slim device profile.

The company says the GX3 is currently sampling, but did not give an estimated time frame for when we might see it implemented in consumer products.

Join HWZ's Telegram channel here and catch all the latest tech news!
Our articles may contain affiliate links. If you buy through these links, we may earn a small commission.
Previous Story
Intel Optane technology to accelerate next generation SSD and memory products
Next Story
Comex 2015 returns with a better trade-in program, tech showcase, and contests with attractive prizes to be won