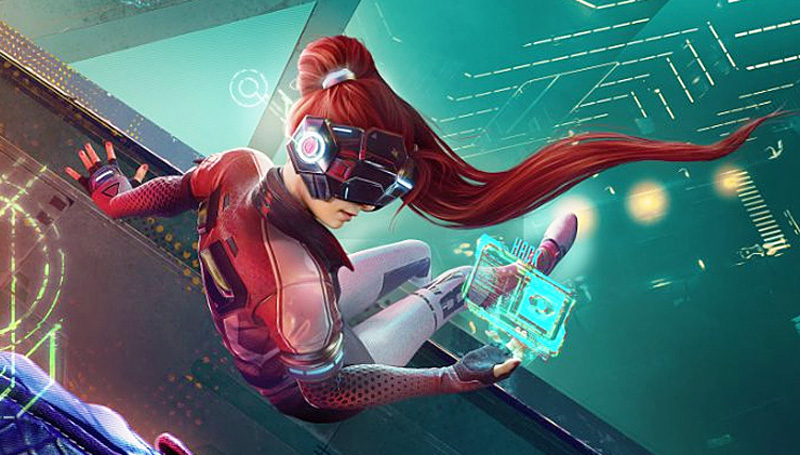 Yet another battle royale game joins the fray!

It looks like Ubisoft is gearing up to announce a new first-person multiplayer shooter. Insider Rod ‘Slasher’ Breslau first leaked the news on Twitter with several images in tow, stating that the game will be called ‘Hyper Scape’. Reportedly, it will be a battle royale game from the developers of Rainbow Six Siege, Ubisoft Montreal.

Breslau describes Hyper Scape as, “a free to play BR FPS set in a futuristic virtual world for both PC and consoles.” He added that the game is being developed with streamers in mind, providing leaked images that detail heavy Twitch integration. Apparently, viewers can hop into Twitch chat to give streamers speed and health items, and even progress in-game just by watching gameplay.

Sources: Hyper Scape is a free to play BR FPS set in a futuristic virtual world for both PC and consoles with the console launch coming later this year including crossplay. Hyper Scape goes into closed beta next week with open beta and full launch of the game on July 12th pic.twitter.com/gUURbvo1N3

Hyper Scape’s official announcement has been rather messy thus far. After the leak, an official website for a fictional in-game company called Prisma Dimensions went live. It prominently features the Ubisoft logo, and even goes into detail on what Hyper Scape is:

Prisma Dimensions is thrilled to bring you the first iteration of the Hyper Scape on July 2nd - and with it, the pulse-pounding action of Crown Rush! Get ready to drop into the neon-drenched streets of the world’s premiere virtual city, Neo Arcadia. You'll want to hit the ground running, as you’ll need every advantage you can find to give yourself a leg up on the competition. Only the best contenders will make it to the final showdown. Will you claim victory, or fall to the perils of the Hyper Scape?

Well, that certainly sounds like a battle royale game. Twitch streamer FFearFFul also tweeted out official concept art from Hyper Scape - which Ubisoft Middle East later retweeted. Multiple outlets have pointed to a July 2 reveal for the game, and a full release on July 12.

That makes a lot of sense, considering that Ubisoft’s big E3-style event will also take place on July 12. We’ll likely see the launch date reveal then.