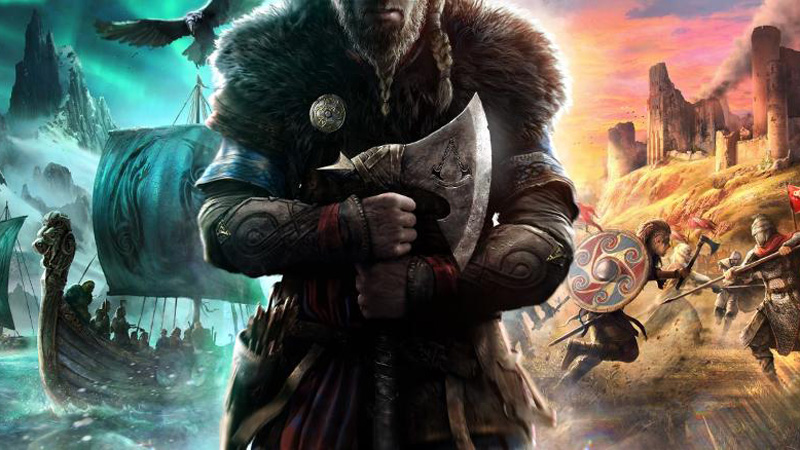 Ubisoft just revealed the next Assassin’s Creed game: Assassin’s Creed Valhalla. The reveal took place via an eight-hour livestream that took place last night, where visual artist Kode Abdo/BossLogic slowly created artwork for the game. Once the artwork was completed, the game’s full title was revealed.

You can still watch the stream below:

The artwork is clearly Viking-themed, with one half displaying warriors battling one another while a village burns to cinders in the background. The other half has ships navigating an icy body of water at night - which fits right in with the series’ recent focus on naval combat. In the middle of the two halves is a Viking warrior, standing grimly while holding an axe. It looks like his wrist is sporting a Hidden Blade, as well.

This might not come as a surprise to many, considering that the game was teased via a poster in The Division 2 - which featured a Viking carrying Apple of Eden. A Nordic setting also makes sense, considering the direction of recent games in the series. Assassin’s Creed Origins and Assassin’s Creed Odyssey both tackled ancient civilisations and their sprawling gods-and-monsters-filled mythologies. As we’ve clearly seen in God of War (2018), a Nordic setting can be a regular cornucopia of fantastic gameplay.

Ubisoft has announced that a full reveal of Assassin’s Creed Valhalla will happen tonight on Youtube, likely with a cinematic trailer. Ubisoft Montréal recently stated via a tweet that they worked with 14 co-development studios on Assassin’s Creed Valhalla, which is a pretty good indicator of how massive the game might be. For comparison, 10 studios helped out with development on Assassin’s Creed: Odyssey - a game that can take more than a hundred hours to complete, and received multiple content updates and expansions post-release.

If I were to make one more bit of wild speculation, I’d say that the one raven seen in the left side of this artwork points to Odin - a prominent god in Nordic mythology who uses two ravens as his eyes and ears around the world. We could potentially see the whole Ragnarok/apocalypse storyline that the God of War sequels are focusing on play out in just one game, which I am personally very excited for.