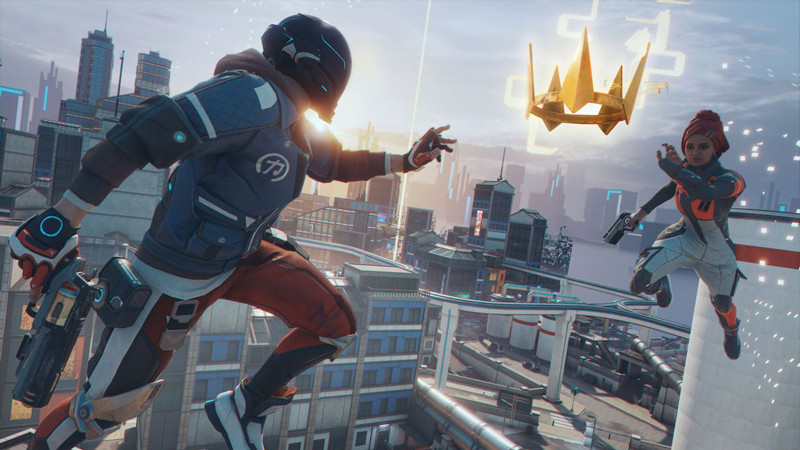 After multiple leaks, Ubisoft has officially announced Hyper Scape - an upcoming free-to-play battle royale game created by Ubisoft Montreal. The game will launch later this year on PC, and then on PlayStation 4 and Xbox One soon after.

Set in the future, Hyper Scape presents a world in which humans have opted to live out most of their lives in virtual reality, Ready Player One-style. This virtual world is called Hyper Scape, and one of the activities available within it is a battle royale-style competitive game called Crown Rush. As far as in-game lore goes, it’s shallow - but it works.

Much like Fortnite and Apex Legends, Hyper Scape throws you into a massive arena where 100 players battle it out for victory. A couple of gameplay mechanics set it apart from its peers, however. For one, you won’t see a circle closing in on you throughout the game - instead, buildings in the urban environment will slowly decay and disappear entirely over time.

Instead of having character-specific abilities like Apex Legends, Hyper Scape also gives players the freedom to find and switch out new abilities on the fly. These are called ‘Hacks’, abilities such as invisibility that you can find and pick up as loot drops around the map. Instead of ignoring loot you already have during gameplay, you can fuse your weapons and abilities with others of the same kind to upgrade them as well.

You can check out more detail on Hyper Scape’s moment-to-moment gameplay below:

The game is getting a Valorant-style rollout, in that a closed beta is currently available for PC players to try out. If you want in, you’ll have to tune in to Twitch streamers for a chance to receive the beta - but only certain regions are eligible.  It has a fairly high level of Twitch integration as well, with viewers being able to vote on in-game events and check out the streamer’s statistics.

From the looks of it, there’s a lot of fun stuff that makes Hyper Scape stand apart. Instead of making the urban environment one location on the map, it’s the entirety of the game. Instead of making players pick up attachments or swap weapons with others of higher rarity, they just have to fuse the same weapons to upgrade them. Add to that a Quake-like level of movement speed and verticality, and you’ve got a lot of potential on your hands.