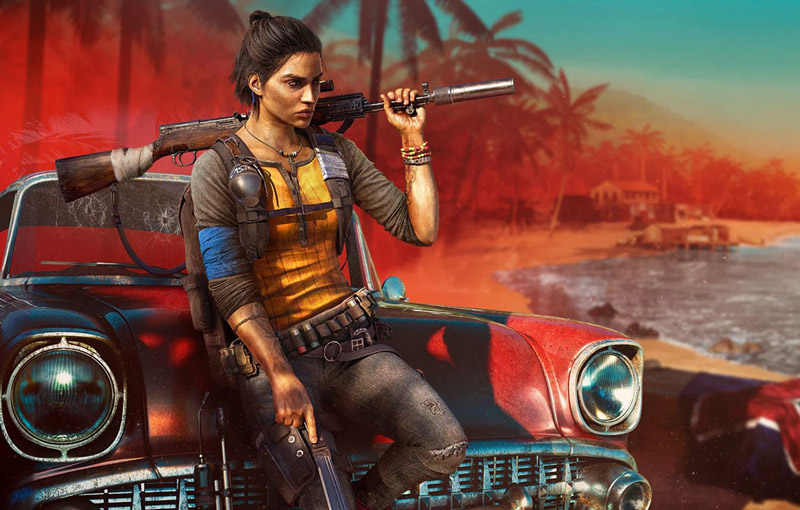 Watch the full gameplay reveal below (beginning at the 30-minute mark):

Far Cry 6 takes players to a fictional Cuba-inspired Carribean island called Yara. The villainous Anton Castillo (Better Call Saul’s Giancarlo Esposito) rules this land with an iron fist. His obsession with restoring Yara to its former glory using harsh and radical methods stir up a rebellion within the island's people. While all this is going on, Anton also has to pass the torch of leadership to his reluctant son Diego, who might have trouble shouldering all this responsibility… and cruelty.

You play as Dani Rojas, a local Yaran and former soldier who is initially reluctant to join the fight against ‘El Presidente’ Anton Castillo, but is forced to do so after watching others get slaughtered under his tyrannical regime. Dani can be either male or female, depending on your preference. Unlike Far Cry 5, it looks like Dani will be featured in third-person cutscenes with a lot more voice acting, suggesting that the protagonist is far more involved in this story.

Ubisoft also confirmed that missions in this game can be tackled in almost any order, allowing you to explore Yara at your own pace. Yara has been cut off from the rest of the world, so the vehicles and weapons you find will have a unique old-timey feel to them. There are 49 fully-customisable weapons for you to use, including a CD launcher that plays the 90s pop classic Macarena when fired.

A new addition is the Supremo backpack, which comes in different varieties that give you a special ability to use in battle. The Exterminador Supremo can be seen in the trailer, and it acts as a Boba Fett-like rocket launcher carried on your back. Dani Rojas doesn’t skip leg day, don’t question it.

Perks are a longtime gameplay feature in Far Cry 6, usually found in a skill tree and unlocked using Perk Points. In Far Cry 6 however, Perks are tied to the clothes you wear. This means that fashion isn’t cosmetic-only - you’ll need to mix and match what Dani wears so you’re better equipped to go in guns blazing or stealthily for missions.

Companions also return, referred to as ‘Amigos’ in this sequel. They include the lovable puppy Chorizo and… a massive crocodile. You can pet your Amigos and yes, that includes the crocodile. The game also has horses for players to ride around on, and the option to put away your weapons if you don’t feel like getting in trouble with Castillo’s troops.

Overall, it looks like Ubisoft hasn’t been content to sit on their laurels for this one. Far Cry 6 stands apart from its predecessors by allowing players more agency in the open-world than ever before. Let’s just hope that the story doesn’t fall off a cliff towards the end like previous games in the franchise. I’m looking at you, Far Cry 3 and Far Cry 5!

Join HWZ's Telegram channel here and catch all the latest tech news!
Our articles may contain affiliate links. If you buy through these links, we may earn a small commission.
Previous Story
Create an open-air or test bench PC with Cooler Master's new MasterFrame 700 chassis
Next Story
Dell talks up productivity as they introduce their new USB-C Hub Monitor and ANC headset