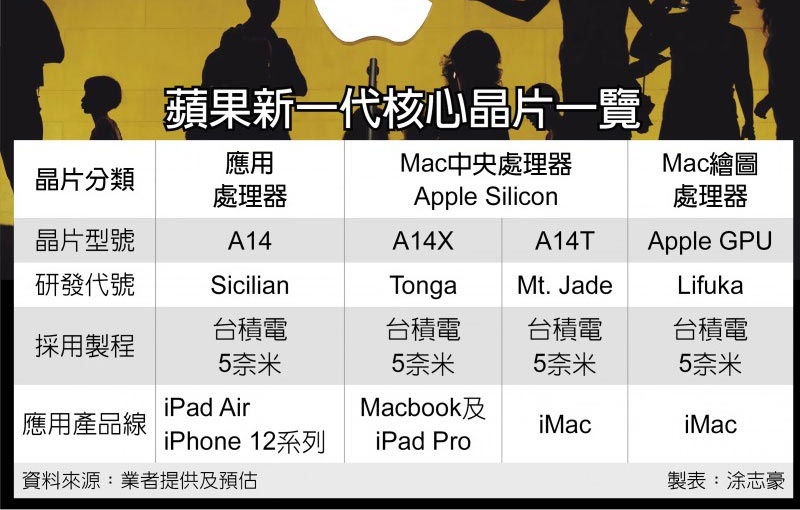 Apple could be introducing two new A14 variants next month when it unveils new Mac products.

Supply chain sources told China Times that Apple has developed the A14X and A14T chipsets for the Mac. The A14X chipset, codenamed Tonga, is said to be featured in the new MacBook and iPad Pro.

The Chinese publication reported last month that a 12-inch MacBook will be unveiled by the end of the year. As for the iPad Pro, the A14X is likely coming to the 12.9-inch model with Mini-LED display.

The A14T chipset, codenmaned Mt. Jade, will be used to power the iMac. The A14T chipset is likely accompanied by Apple's first self-developed GPU, codenamed Lifuka. However, the iMac may only be available next year as the A14T chipset is reportedly going into mass production in the first half of 2021.

Bloomberg has a similar report in April; sources say there would be three Mac processors based on the A14 chipset. Rumours suggest that the first of the three processors will have 8 high-performance cores and at least four energy-efficient cores.

Join HWZ's Telegram channel here and catch all the latest tech news!
Our articles may contain affiliate links. If you buy through these links, we may earn a small commission.
Previous Story
Microsoft has added trackpad and mouse support to its Office apps for the iPad
Next Story
Netflix has revealed five new projects in its upcoming anime lineup